10 Quotes from the Most Popular TED Talk EVER 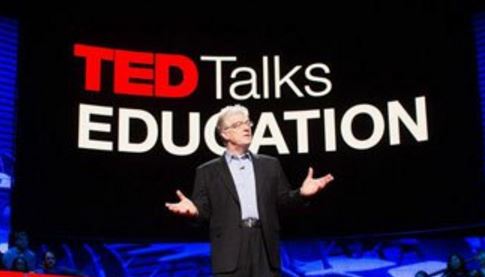 Sir Ken Robinson’s 2006 talk entitled “Do Schools Kill Creativity?” remains the most popular TED talk ever. That should tell us something about the public’s desire to transform today’s education system.

Here are 10 thought-provoking quotes from it:

1. “If you think of it, children starting school this year will be retiring in 2065. Nobody has a clue, despite all the expertise that’s been on parade for the past four days, what the world will look like in five years’ time. And yet we’re meant to be educating them for it. So the unpredictability, I think, is extraordinary.”

2. “My contention is, all kids have tremendous talents. And we squander them, pretty ruthlessly.”

3. “My contention is that creativity now is as important in education as literacy, and we should treat it with the same status.”

4. “If you’re not prepared to be wrong, you’ll never come up with anything original.”

5. “By the time they get to be adults, most kids have lost that capacity. They have become frightened of being wrong. And we run our companies like this. We stigmatize mistakes. And we’re now running national education systems where mistakes are the worst thing you can make. And the result is that we are educating people out of their creative capacities.”

6. “We don’t grow into creativity, we grow out of it. Or rather, we get educated out if it.”

7. “There’s something curious about professors in my experience — not all of them, but typically, they live in their heads. They live up there, and slightly to one side. They’re disembodied, you know, in a kind of literal way. They look upon their body as a form of transport for their heads.”

8. “Around the world, there were no public systems of education, really, before the 19th century. They all came into being to meet the needs of industrialism.”

9. “If you think of it, the whole system of public education around the world is a protracted process of university entrance. And the consequence is that many highly-talented, brilliant, creative people think they’re not, because the thing they were good at at school wasn’t valued, or was actually stigmatized.”

10. “Our education system has mined our minds in the way that we strip-mine the earth: for a particular commodity. And for the future, it won’t serve us. We have to rethink the fundamental principles on which we’re educating our children.”