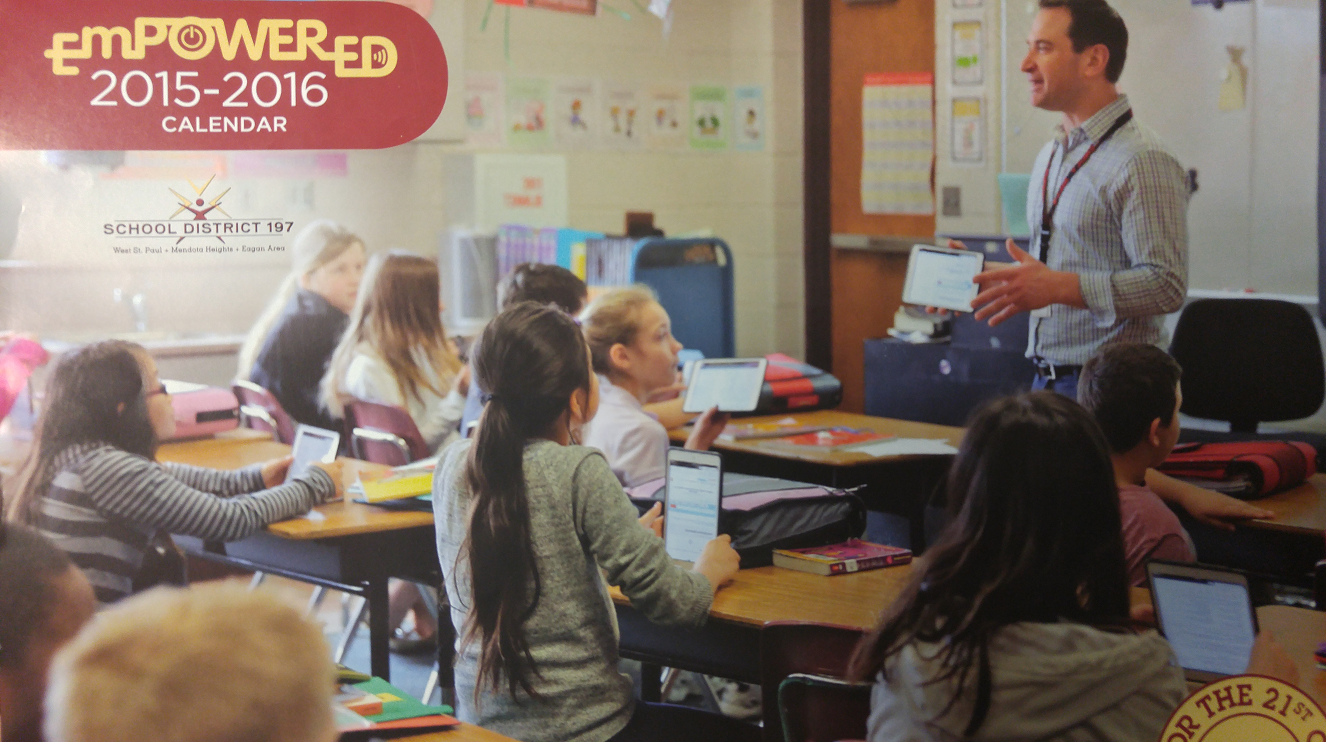 Public school districts today are increasingly identifying screen time with education. Across the country, many districts are spending a lot of money to provide each student with an iPad or laptop.

I live around one of them. The other day I received in the mail the 2015-16 calendar for the West St. Paul-Mendota Heights-Eagan school district (ISD 197), a suburban district just outside of Minneapolis and St. Paul. The theme of the calendar is “emPOWERed?,” and aims to highlight the district’s new 10-year, $1.2M annual levy “to fund technology integration.” As the Superintendent of the district explains, “Technology will transform teaching and learning… by being leveraged to personalize learning for each and every student.”

Here is a campaign sign the school district used to convince the public to fund this new technology for the classrooms. Notice the district called it the “Levy for Learning,” yet it was asking for funds for technology, heightened security, and a new sports stadium:

After looking through ISD 197’s calendar, it becomes apparent that the school district primarily plans to “empower” students by having them turn on the “POWER” buttons on their new Apple devices.

To be fair, the Superintendent writes that “Having devices in every classroom won’t mean that it’s the only thing students will experience.” But you would never know that from the pictures in the calendar, which give the impression of a school district where children are staring at screens ALL OF THE TIME.

Here’s the cover of the calendar:

And here are the pictures for each month of the calendar:

Technology is not going away anytime soon, and it’s perfectly reasonable that students have some access to computers in school. But in my experience, computer proficiency is not what most students today struggle with. Rather, they are struggling with mastering the basics – reading, writing, math – and screen time too often puts off the achievement of that mastery. In fact, in this particular school district, 40% of the students are not at grade-level in reading and math!

Technology can be a tool in learning, but it’s not a substitute for it. And school districts like ISD 197 are using it as a façade to mask major deficiencies in their students’ education.

I assume ISD 197’s calendar is supposed to be a marketing tool to generate public pride in the local district. Really, it just left me feeling bad for the students.