The Cognitive Dissonance of Teachers Unions 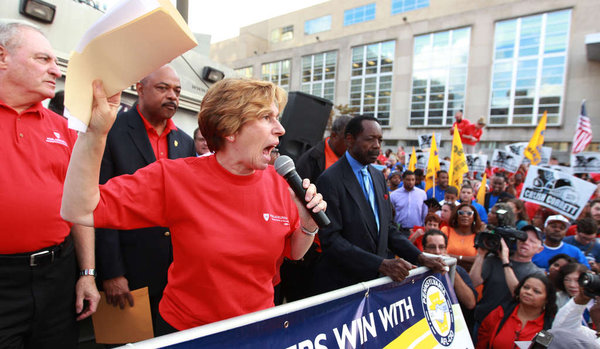 Today’s Washington Post contains its semi-annual, John Taylor Gatto-wannabe letter from a public school teacher on why she is quitting. It’s not shocking, since about half of teachers quit within their first five years. The letters are published more for the purposes of spurring on education policy.

In the letter, the teacher in Michigan – Stephanie Keiles – identifies some genuine problems with today’s education system:

“I have been forced to comply with mandates — from the Republicans at the state level and the Democrats at the national level — that are NOT in the best interest of kids. I am tired of having to perform what I consider to be educational malpractice, in the name of ‘accountability.’ The amount of time lost to standardized tests that are of no use to me as a classroom teacher is mind-boggling. And when you add in mandatory quarterly district-wide tests, which are used to collect data that is ignored, you get a situation that is beyond ridiculous.”

But she ends up reading from the teachers union cue cards when attempting to identify the causes of these problems: “privatization,” “charter schools,” the “underfunding of public schools.”

The fact is, all the problems that Keiles describes – mandates, focus on standardized tests, abstract measures of accountability – are the results of an overly centralized education system, one that removes oversight of education from schools, parents, and local communities, and entrusts it to a growing bureaucracy. As I pointed out in a previous post, this centralization has been going on for some time.

But while teachers unions rail about these problems, the dirty little secret is that they support an overly centralized system. The primary goal of teachers unions is to increase pay and benefits for their members. In an attempt to accomplish this goal, they have been one of the main supporters of the consolidation of school districts. As Dana Goldstein explained in her recent book, The Teacher Wars,

“Under collective bargaining, it was easier for unions to negotiate with one strong administrative body, such as a city superintendent, board of education, or mayor, than with a plethora of neighborhood school boards or principals, each with their own set of demands.”

But the union support of centralization has had only mixed results. While public school teacher benefits (including health care and pension) continue to be much better than most in the private sector, salaries have just barely kept pace with inflation.

The teachers unions need to learn that they can’t have it both ways. They can’t complain about privatization yet ask for the benefits of locally-controlled private schools. They can’t support a centralized education system yet avoid the increased accountability that such centralization requires. And they can’t have happy teachers while continuing to support a structure that impedes that happiness.