Sex in a Time of Hooking Up 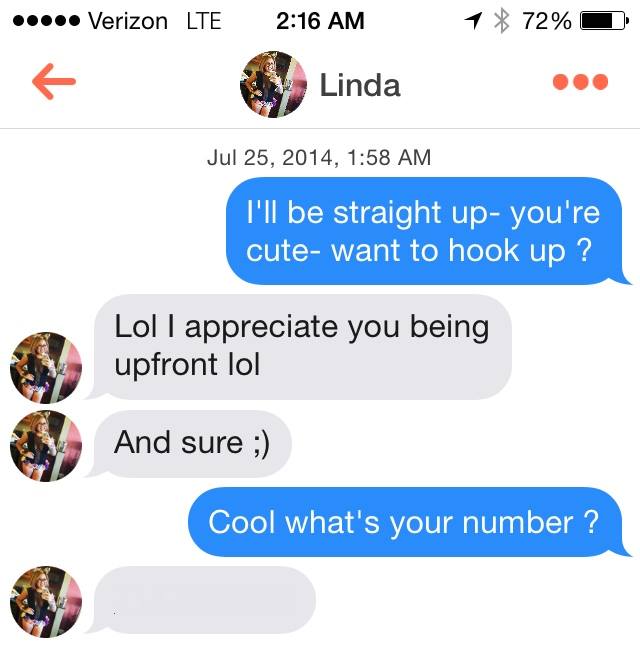 Trending on Vanity Fair right now is an article entitled “Tinder and the Dawn of the ‘Dating Apocalypse.’” (For those who don’t know, Tinder is one of many “dating” apps that also happens to be frequently used by millennials to hook up with each other on short notice.) The article describes a world where young adults increasingly seek after quick sexual encounters and avoid relationships like the plague.

The article is long, but its subject matter and salacious quotes will most likely keep you reading. Here are some initial observations, questions, and critiques that I came away with:

1) The participants in the hookup culture seem to have a lot of insecurities.

“‘It’s instant gratification,’ says Jason, 26, a Brooklyn photographer, ‘and a validation of your own attractiveness…’”

And here’s what the women have to say:

“‘It’s, like, fun to get the messages,’ Danielle says. ‘If someone ‘likes’ you, they think you’re attractive.’”

“‘It’s a confidence booster,’ says Jessica, 21, the one who looks like a Swedish tennis player.”

2) Is the hookup culture mainly limited to big cities and universities?

The case studies in the article are limited to big cities and universities, which are largely artificial environments. In the former, one is cut off from the natural world; in the latter, one is cut off from many of the responsibilities and consequences of later life. I wonder if this fact could be a contributor to facilitating the hookup culture which, historically (not prehistorically) speaking, is fairly novel.

3) Is the stressful nature of modern work and life connected to the hookup culture?

The article begins in a sports bar, where “the tables are filled with young women and men who’ve been chasing money and deals on Wall Street all day, and now they’re out looking for hookups.” And for all its artificial character, college is also very stressful for today’s students, whose most common mental health diagnoses are anxiety and depression. Is sex being used for stress relief?

4) There’s a childishness to it.

Reading the article felt like watching the movie Cruel Intentions or an episode of Gossip Girl (author hangs his head in shame). On display are a bunch of dressed up adolescents who are doing their best to act mature and experienced when dealing with a “grownup issue” like sex. Ironically, one gets the impression that the participants in the hookup culture don’t know all that much about sex beyond its physical aspects.

One of the men interviewed had slept with 30 to 40 women in the past year, though he regarded his friend as a much more successful Tinder user. Knowing that the CDC says that there are 20 million new STD infections in the U.S. each year, I cringe when I hear those hookup numbers. Chances are that the men in the article have gone through years of sex education in school, where they’ve heard all about the dangers and prevalence of STDs. I know that fear-based abstinence education doesn’t really work, but I didn’t know it was that ineffective.

6) Some claim that Tinder offers sexual freedom, but it’s really just a different kind of conformity with its own rules.

Here’s what a group of female Tinder users said:

“It’s such a game, and you have to always be doing everything right, and if not, you risk losing whoever you’re hooking up with…

Sex should stem from emotional intimacy, and it’s the opposite with us right now, and I think it really is kind of destroying females’ self-images…

But if you say any of this out loud, it’s like you’re weak, you’re not independent, you somehow missed the whole memo about third-wave feminism.”

7) What we all knew: the hookup culture favors the guys.

The men are clearly more content with the hookup culture; they all say that they’re not interested in relationships. Some of the women say that, too, but they also complain about their hookups not being polite enough, or having hurt feelings.

And then there’s the “double standard”:

“‘The double standard is real,’ Nick says. ‘If I’m a guy and I’m going out and f****** a different girl every night, my friends are gonna give me high-fives and we’re gonna crack a beer and talk about it. Girls do the same, but they get judged. I don’t want it to be like that, but sometimes the world is the way it is and I can’t change it, so I just embrace it.’”

8) “A few young women admitted to me that they use dating apps as a way to get free meals. ‘I call it Tinder food stamps,’ one said.”

I think others have called it something else.

In The Technological Society, Jacques Ellul proposed that the modern world had made “efficiency” the goal of all human activities. Now, apparently, sex has become more “efficient,” too. Tinder users no longer have to worry about a long, drawn-out dating process in the hopes of eventually having sex. As “Nick” says, “Tinder is fast and easy, boom-boom-boom, swipe.”

Amidst the smugness, grins and casual jokes in the article, one picks up a tone of ennui among the participants of the hookup culture. Unsurprisingly, a group of women in the article said that “it’s not uncommon for their hookups to lose their erections.”

Human beings have an innate desire for mystery. And in the end, I believe that part of the enduring goodness and attractiveness of sex lies in preserving its mystery. Those of us who have grown up with sex ed classes, and a steady dose of sexual images on the internet and in the entertainment industry, are all too familiar with sex. The hookup culture has taken familiarity with sex – or at least a version of it – to a whole new level. But, as the saying goes, “familiarity breeds contempt.” As strange as it may sound, I wonder if the hookup culture’s casual use of sex contains the seeds of its future, and unfortunate, contempt for it.