Another Lesson in Economics 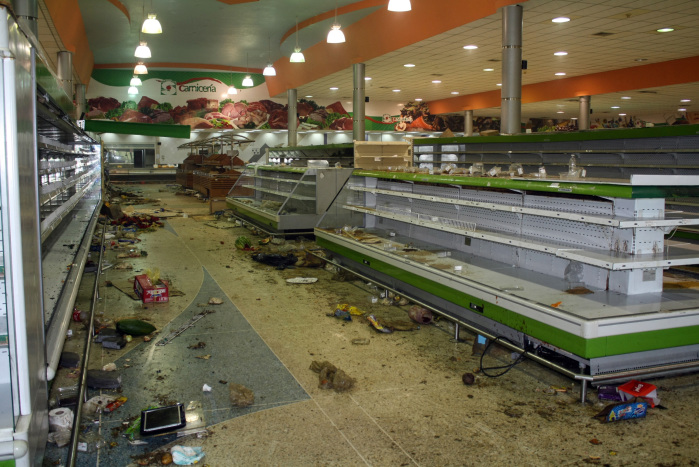 Have you seen this one?

If you’re not familiar with what’s happening, the government of Venezuela embarked on a socialist experiment and it’s not going well.

Promising prosperity for all, Venezuela’s government under Hugo Chavez took over many private industries, established price controls, and hoped to fund everything through state-owned oil exports. With the crash in oil prices, a country already facing economic challenges is now ravaged by shortages of all kinds and hyper-inflation. It’s a horrible situation for the common people of Venezuela and conjures memories of Weimar Germany of the 1920s – though no one is arguing that Venezuela is about to become the next Nazi Germany.

“This time last year, the bolivar was far more valuable, and even as recently as May this year, you could still get hold of a dollar for less than 300 bolivars. Today, you need more than twice that.

The country has a spiraling inflation rate. Official inflation is high enough, at 68.5%, but like the official exchange rate, that paints a much rosier picture than reality. Professor Steve Hanke, who runs the “Troubled Currencies Project,” a joint program between the Cato Institute and Johns Hopkins University, says in reality inflation is more like 808%.

The country is a major oil exporter, and the plunge in prices is a huge part of what’s causing the crisis — as a result, the country is pegged as having the riskiest debt in the world, with the highest likelihood of a future default. Food is increasingly hard to get hold of, shop shelves are often empty, and the country’s social order is deteriorating.”

As for those shortages, here’s the reality for people:

“For Jose Perez, a Venezuelan taxi driver from Caracas, the hardest part about watching his wife die from heart failure was knowing just how easily she could have been saved.The surgeons at the Caracas University Hospital were ready to operate on 51-year-old Carmen, but because of the shortages of medicines now ravaging Venezuela, they had no stocks of the prosthetic artery that would have saved her life.

For a day, the family enjoyed a glimmer of hope after a nationwide search uncovered one such device, but Carmen needed two and a second one was nowhere to be found. She died two days later.It is life-and-death stories like these that illustrate the depth of the economic crisis now confronting Venezuela, a crumbling socialist-run petro-state that looks in danger of being tipped over the edge by the crunch in world oil prices.

For Venezuelans like Mr Perez and tens of thousands more awaiting medical treatment around the country, the magic realism of Hugo Chavez’s great Bolivarian socialist revolution has turned to bitter reality less than two years after the former leader’s death from cancer.

‘It’s the government who is responsible for my wife’s death, not the doctors,’ Mr Perez, 63, told The Telegraph last week. ‘Things are very bad in this country, and they are getting worse. I feel that we are in a dictatorship. At the start I believed in Chavez, now I can’t look at him. He is in the best place now.’

Mr. Chavez might be dead, but as one of Latin America’s most charismatic political performers, he is far from forgotten.

His placid features still stare out from billboards in Caracas, while Venezuelan television still plays his rambling speeches denouncing America, capitalism and the West.He promised the people the riches of the revolution, and for a while he was able to deliver, thanks to his country being blessed with the world’s largest proven oil reserves.

But now, as the people queue at the pharmacy and the supermarket for basic necessities like baby formula, flour, milk and toilet paper, the promises sound like empty boasts.”

Over at the Washington Post, there is a good piece that explains some of the underlying reasons behind the problems, mainly: 1. The government is running a massive deficit which is creating inflation, 2. The government hopes that both price and currency controls will fix inflation, and 3. The government suspended the law of supply and demand, creating shortages.

As the piece argues:

“It’s a reminder that you can’t suspend the laws of economics. You can’t print money to pay for things without creating inflation. And you can’t stop that inflation just by saying you want it to. But not only will this magical thinking fail, it will also create new and even worse problems like shortages.

Capitalism is the worst economic system except for all the others.”