Among the Ruins of Carthage 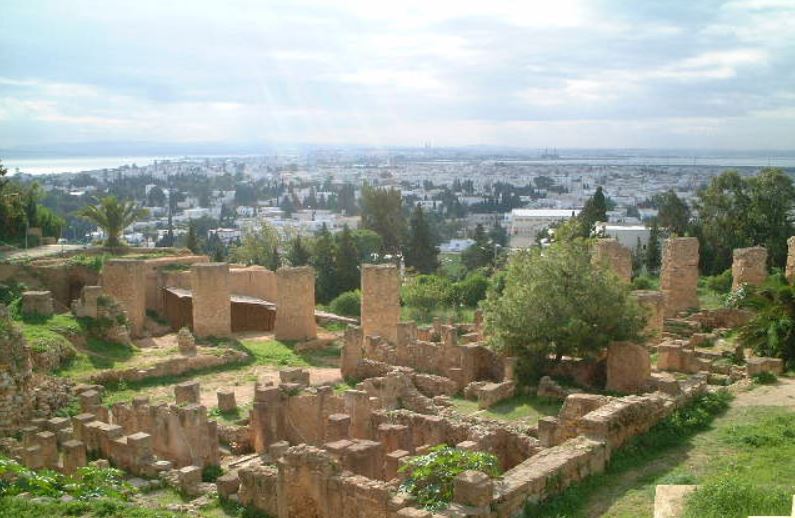 Nowhere are Roman ruins thicker than in Tunisia. For this, from the days when Scipio took Punic Carthage until the Vandals broke into the city, was the Province of Africa, wondrously rich and populous. St. Augustine was born in Carthage—of a patrician family—and died in neighboring Hippo, when the Vandals were at the gates.

I have just spent some days in Tunis and the country round about. In Carthaginian and Roman times, the town on the site of Tunis, across the bay from Carthage, was a slum; now it is the capital of a new state. But the greatness of this land is gone, and one comes chiefly to view the ruins.
If one goes up to the Moslem town of Zaghouan, thirty miles inland from Tunis, he finds the springs from which the Romans took their water to supply the great Antonine baths at Carthage, and from which Tunis’ water still comes. Here stands even today the Temple of the Nymphs at the fountainhead, built in the Emperor Hadrian’s day. The colossal Roman aqueduct still stands in ruin all down to the coast, across arid hillside and plain.
The ruined Roman cities of Tunisia are many, sacked by Vandal and Arab. Of them, Carthage by the sea is most evocative of the grandeur that was Rome. Though the Romans, having destroyed forever the Punic power, sowed with salt the site of the Carthaginian capital, later the Romans built their own city on the site. The eminence called the Birsa, where the people of Hannibal made their last ghastly stand in citadel and temples, is surmounted nowadays by the Catholic cathedral. But one sees elsewhere, the Tophet, the pit in which the Carthaginians sacrificed children; and many Carthaginian tombstones.
Water made this land fruitful. But its forests were hewn down by militant Vandal and Byzantine and Arab, and erosion followed, and the great works of irrigation crumbled to dust. Until Decatur, Eaton, and other Americans taught the Barbary pirates a lesson, blackmail, freebootlng, and kidnapping were the industries of this blasted African shore.
No strong power endures forever. In those times when Roman emperors were bred up in the Province of Africa, no man expected that all this splendor would become the abomination of desolation. Only after Alaric’s barbarian host had taken Rome did St. Augustine see that Roman might, too, was a vanity which must pass; and he wrote The City of God, which endures when the cities of this earth are given up to fire and sword.
In the amphitheater of Carthage, still to be seen, St. Perpetua and many other Christians gave up the ghost. One finds, too, a little subterranean church dedicated to St. Monica, the mother of St. Augustine. Yet early Christian site though Carthage was, Islam triumphed long ago, and virtually the only Christians there now are resident Europeans. Their villas, and those of rich Tunisians, stand on the sites of big Roman houses, looking across the magnificent bay. Habib Bourguiba, president of the new Tunisian Republic and powerful as any Bey of Tunis of old times, is building himself a palace on these heights.
One day, we must expect New York and Los Angeles will be as Carthage is now, laid low. As the centuries slide by, every civilized people forget or neglect the faith and the principles which raised them up to honor. You and I will be lapped in lead long before that day of wrath, I trust. Yet how soon or late a great city falls depends always on the courage and the wisdom of folk living long before the last agony.
—”Among the Ruins of Carthage,” To the Point (November 6, 1963); Kirk traveled throughout North Africa with Thomas Molnar.
Image Credit
This blog post has been reproduced with the permission of The Imaginative Conservative. The original blog post can be found here. The views expressed by the author and The Imaginative Conservative are not necessarily endorsed by this organization and are simply provided as food for thought from Intellectual Takeout.????????????