Why It’s Time for a Different Teachers’ Union 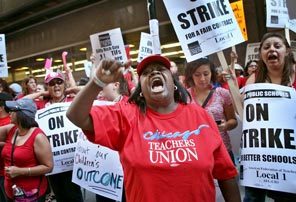 Basically, the current model began with the industrial “labor and management are adversaries” model, giving laborers a collective voice in the face of the perpetual push to maximize profits.

But schools and school systems aren’t businesses, and teachers are not exactly factory floor workers. Teachers’ unions have been able to morph into organizations that do much more than protect and promote their members’ economic interests. A quick look at National Education Association’s (NEA) Resolutions proves my point: they more or less claim to know how to best run schools and entire educational systems, and they even have official positions on reproductive rights, global climate change, international consumer protection, and a whole host of issues unrelated to education.

color:#333333″>The important point here is that today’s teachers unions operate on an all-or-nothing model. You teach within the confines we approve or you don’t get representation. Want to teach at a private school? a charter school? a religious school? You’re on your own.

color:#333333″>This model actually works when almost every child attends a public, district-governed school. Fifty years ago, that was the case, and it enabled teachers unions to control or heavily influence the very few levers of power in the educational world – namely, school boards and district administrators.

But the growing school choice movement is putting power into the hands of parents. The option to send your kid to a charter school – or now, in Nevada, any school – is a radical decentralization of educational power. And it’s only going to become more widespread. More than anything, I think, this explains the rock-hard resistance to any school choice from teachers’ unions: it’s an effective end to the way they think about themselves and their ability to carry out their self-imposed duties.

color:#333333″>Does this mean that there will be no teacher representation in the coming educational world? I don’t think so, if only because school administrators and boards will not be angels. But there’s a better reason. Plenty of decentralized industries have unions that simultaneously advocate for their members and (more or less) guarantee a level of professional quality to employers. The Actors’ Equity Association represents professional theater actors and stage managers as they move from gig to gig, for example. The United Association of Plumbers, Fitters, Welders, and Service Tech, the International Brotherhood of Electrical Workers, and many other unions operate on the same model. The deal they offer is this: you can hire anyone you want to act, stage manage, install plumbing, weld, wire a building, etc. – but if you want high quality, you have to agree to our terms.

color:#333333″>When enough high-quality, accomplished teachers join together to put a price on access to their roster, schools – private, district, and charter – will listen. Moreover, such a union would be able to represent a wide variety of teachers: those dedicated to a classical model, those specializing in teaching a variety of subjects to English language learners, those devoted to STEM or arts education, those…well, you get the idea. Such a union wouldn’t be interested in controlling the marketplace of education, but in supplying high-quality teachers to every niche of that marketplace.

color:#333333″>Right now, it’s crazy to think of a teachers’ union like this. Education is still highly centralized in states, and the big national unions (NEA and AFT) and their state subsidiaries still control or strongly influence the major levers of power in districts. Moreover, more than 80% of school-aged children attend a public, district-governed school in the United States, and that number will only decrease gradually.

color:#333333″>And I haven’t even mentioned the huge logistical obstacles to such a union: hiring lawyers to draft contracts, organizing and funding leadership to lobby for changes in law and recruit members, dealing with enemies from all sides (i.e. anti-union activists and NEA and AFT) – just to name a few.

But obstacles aside, a radically different teachers union is something we need.