“…they take away our fathers…” 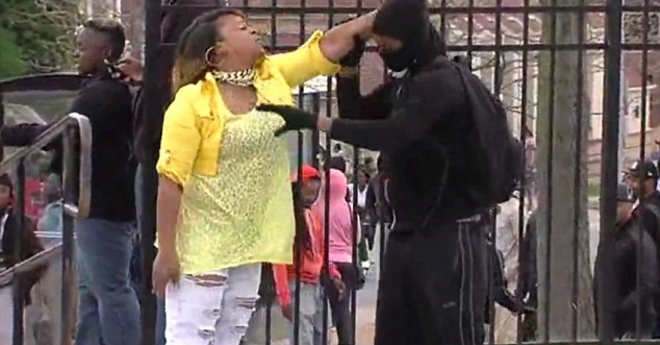 How different would it be for Freddie Gray today if he had had a stable family? Buried in the stories about his death and criminal record, we learn:

“Court papers describe Gray’s childhood as problematic. He lived with his heroin-addicted disabled mother in a home in Sandtown-Winchester that contained enough poisonous lead in the peeling painted walls and windowsills for a court settlement to conclude that he and his two sisters were incapable of leading normal functioning lives.”

I think of my two-year old in such conditions and my heart breaks for any children who started out life in such an environment. While we cannot excuse Freddie’s long criminal record, we can at least see a very troubled life that ended in tragedy and we can hope that justice – whatever that may mean – is served.

Many Progressive pundits have justified the riots based on “systemic racism” and oppression, but from the rioters own mouths we find evidence of deeper problems. Consider the position of Robert Wilson, a college student who went to high school in Baltimore, reported by the New York Times:

“With the riots, we’re not trying to act like animals or thugs. We’re just angry at the surroundings, like this is all that is given to us, and we’re tired of this, like nobody wants to wake up and see broken-down buildings. They take away the community centers, they take away our fathers, and now we have traffic lights that don’t work, we have houses that are crumbling, falling down.”

Who took away their fathers? Now that’s a question worth exploring. The out-of-wedlock birthrate in Baltimore is well over 70% for African American children. Might some of the discontent be caused by this injustice?

By now we all have seen Toya Graham smack her son and yank him out of the riot.

While much has been said about her actions, which I support, what I haven’t seen is a discussion about the boy’s father. Toya is a single mother of six children and it appears that the children have come from multiple men. From all accounts she is working hard to hold her family together and keep her children on the right path. For that she should be applauded and celebrated. Her position is by no means easy and it’s likely she is going to have to work hard to keep her son out of trouble based on the picture below.

Unfortunately, trying to do the best you can moving forward doesn’t erase the wounds of the past. I wish the very best for the Graham family, but I know that boys need dads to be around.

My parents divorced when I was a toddler. My father wasn’t around until I was eight or so, and then I only saw him every other weekend until he died when I was ten. If you think boys don’t need their dads, you are gravely mistaken.

And many are gravely mistaken about the importance of an intact family. We see it all the time in comments and discussions. There is no recognition of the role of family and parents or a child’s innate desire for the security of two, biological and loving parents. Instead, we read with great regularity that the only thing a child needs is a loving adult. That is bunk.

Can children turn out okay without one of their parents or with only a loving adult? Certainly, and I suppose I am an example. But I also realize how different life would be had I had what my children currently have in their stable, two-parent family, despite all of its imperfections. There are longings and desires that will linger with a person for life. We see it in adopted children seeking out their biological parents when they are much older. The bond of blood is strong and when broken leaves a wounded soul.

As a society, we can keep trying to fix the symptoms or we can address the root causes. As Elizabeth Ann Seton is thought to have said, “Disorder in the society is the result of disorder in the family.”