Education Then and Now 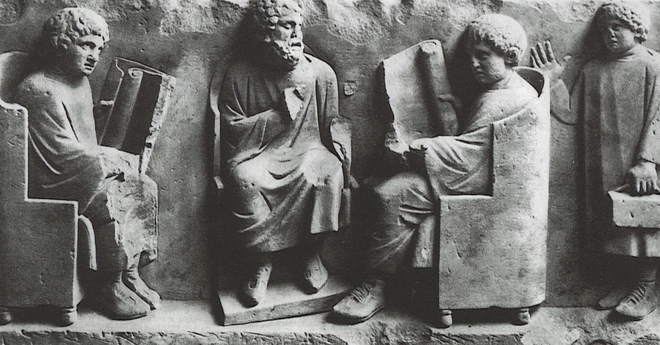 If you want to positively impact the future, you must have a thorough knowledge of the past.

One of the most interesting books that I’ve read in the past year is Henri Marrou’s A History of Education in Antiquity. It’s considered the standard treatment of what education looked like in ancient Greece – the fount from which education in the West and in America sprang forth.

In particular, there were 5 characteristics of ancient Greek education that struck me when reading Marrou. I’ll summarize them for you below:

1) It focused on the basics. Primary students learned the “three Rs.” Step-by-step, they would move from the alphabet to syllables, words, sentences, and continuous passages. When they were ready, students would move on to a grammar school and more complex literature. They were also taught enough math to function in everyday life and in a trade.

2) It focused on literature.  The ancient Greeks believed that a literary education was the best way to establish a core knowledge among citizens and to form mature and virtuous human beings. Teachers spent most of their time introducing students to the great authors of the past. They had a more integrated view of knowledge and did not split up the curriculum into various subjects.

3) It rooted students in the past. The educational philosophy of ancient Greece is contained in the word paideia – a “training” that students underwent to be initiated into adulthood and the Greek way of life. Education was about introducing students to the great authors and ideas of the past. The ancient Greeks believed that this process was the only way to preserve the identity and greatness of their culture while effectively preparing students to contribute to that culture as adults.

4) Education and character formation went hand-in-hand. In 1947 Martin Luther King Jr. wrote, “Intelligence plus character—that is the goal of true education.” The ancient Greeks felt the same way. The Greeks believed that the family should play the primary role in character formation. But they also believed that the values the child learned at home should be reinforced in the schools.

5) There was no centralized education system. Throughout the tenure of their civilization, the Greeks were able to preserve a consistent ideal of education without a centralized system and curriculum. Schools were built and funded by local communities. Greek culture visibly reflected the ideals taught in schools, so there was no need for the imposition of a standard curriculum. Citizens were clear about what education was for, and what it should teach.

In the past 100 years, American education has gone down a different path in the name of “progress.” The characteristics of today’s system, however, make me question how much progress we have really achieved.

The current American education system seems mystified about how to adequately teach our students the basics, as evidenced by low test scores. It has lost a sense of the purpose of education – both for the human person and our culture. It cuts students off from the past by almost solely focusing on modern literature selected for its conformity to modern ideals. It has become increasingly centralized, taking away the ability of local communities and teachers to meet the unique needs of their students.

At the same time, many parents do not provide enough character formation to their children at home – a formation that is necessary if students are to succeed in school.

As C.S. Lewis said, “We all want progress. But progress means getting nearer to the place you want to be. And if you have taken a wrong turn, then to go forward does not get you any nearer. If you are on the wrong road, progress means doing an about turn and walking back to the right road.”

We may very well need to do an “about turn” with the American education system.