Three Ways to Combat Propaganda at Your Local Library 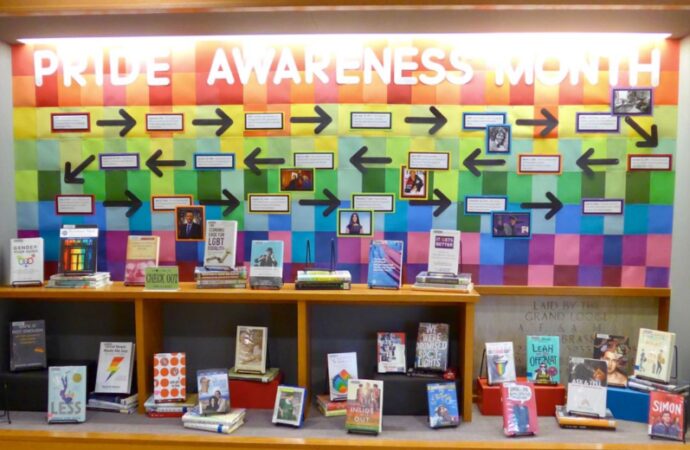 We’re almost through Pride Month. While many aspects of this “celebration” come off as tasteless at best, what’s truly sickening about it is the indoctrination efforts this event directs toward young children.

Public libraries, where drag queen story hours and pride displays are all too common, are one of the primary venues for this indoctrination. Many of the books on display in children’s areas present explicitly sexual material, like the one at a local library showing someone’s naked backside in a pride parade and informing children that some people prefer not to wear clothes.

But these things aren’t just issues during the month of June; propaganda at the library is a year-round problem. Our family has found it increasingly difficult to check books out from the children’s section without accidentally taking home an LGBTQ propaganda piece. For example, my kids love books about animals, so they grabbed And Tango Makes Three, by Justin Richardson and Peter Parnell, the cover illustration showing two adult penguins with their cute, fuzzy chick. Turns out, the two penguins are a pair of bonded males at the zoo who just want a chick of their own. The zookeeper provides them with an egg so they can be dads together. Pretty subtle.

The amount and intensity of the propaganda can feel overwhelming, but Pride Month also offers an opportunity to beat these progressive propagandists at their own game. I recently witnessed this in action from a local parenting group, whose efforts (we can only assume) prompted the library to remove its Pride display in favor of a Caribbean American Heritage Month display (that’s a thing?). The parent group didn’t picket or argue; instead, it used tactics that forced the library’s hand by working within the system.

And that’s not the only strategy parents can employ. Here are three more ways to combat progressive propaganda at your local library:

One method comes from CatholicVote.org, which has been advocating “hide the pride.” Simply check out the LGBTQ books in your library’s collection and keep them tied up and of sight. This protects both those children in and out of your home. A variation on this theme would be to “lose” them among the other books on the shelves, making them less visible or easy to find. Of course, “hide the pride” can create the illusion that these books are popular, so if you’d rather take a more direct approach, try the following options.

Request that your library represent ALL perspectives on gender

Frequently, when parents bring up concerns about LGBTQ children’s books, libraries cite the fact that these institutions are taxpayer-funded, and therefore can’t censor out any one ideology. So let’s take them at their word and test this claim by asking your library to display books that support a traditional, binary view of gender along with the Pride books. Donate books like Johnny the Walrus, by Matt Walsh, I’m A Boy, by D. T. Carter, and God Has a Plan for Boys and Girls, by Monica Ashour to add to your library’s collection. If the staff refuse, publicly make it known that they discriminate against some taxpayer groups.

Ask your library to label the books

Request that your library put books that represent non-traditional family structures and LGBTQ characters in a special section or that they label the spines so that parents know what they’re checking out. Many parents—even those who support LGBTQ rights—don’t really want their young children exposed to these ideas and are unaware that it is happening. Your librarian may respond that they would then have to label all books with an explicitly religious, vegetarian, environmental, or other worldview. Tell them that would be great.

These strategies may feel like a drop in the bucket in the face of organized efforts to promote LGBTQ perspectives to children, but even small efforts can hold back the tide at a local level.

And there’s something bigger at play here than simply keeping these books out of our children’s hands. Our kids need to know that we fought for them.

The LGBTQ crisis among young people is less an ideological issue than it is a connection issue. Kids often turn to sexual identities for attention and a sense of belonging—which means that we as parents have failed to give that to them. Thus, a great place for to us to start repairing our relationship with our children is by showing them that we will stand up for and protect them, whatever that takes.