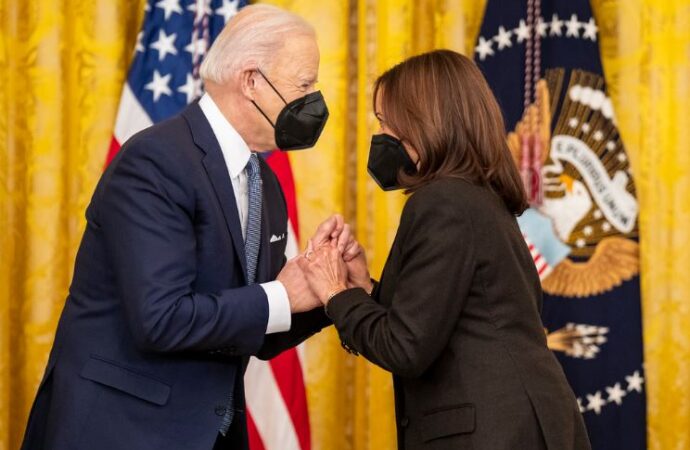 Are we being too tough on President Joe Biden?

Sure, the country is falling apart. Inflation is eating up household budgets and retirement plans. Certain goods have gone missing from the shelves of our grocery stores. Baby formula and now even tampons have become scarce. Through-the-roof increases in the cost of gasoline are emptying our pocketbooks at the pump, causing some Americans to cancel vacations. The soaring price for a trucker’s gallon of diesel fuel is adding to transportation costs, which in turn ratchets up the prices in our stores.

In the meantime, while Mom and Dad are serving beans to the kids and turning off the air-conditioning, Joe and his compadres are hard at work celebrating Gay Pride Month, conducting Jan. 6 hearings, and trying to establish a disinformation board to root out the dissidents among us.

I’ll stop there. The litany of complaints goes on and on.

But I have to hand it to the president. He is fulfilling one major campaign pledge, and given the initial odds against that possibility, I say “Hats off!” to Joe Biden.

Both on the campaign trail and on defeating Donald Trump, the Great Reconciler promised to reunite the American people. “I pledge to be a president who seeks not to divide, but to unify; who doesn’t see red states and blue states, only sees the United States,” he said after winning the 2020 election.

And he has kept that pledge. In spades. He is bringing the American people together.

An AP poll conducted in May found that Joe Biden’s approval rating among American voters was only 39 percent. The same poll found that only about 20 percent of Americans thought the country was headed in the right direction or that the economy was good.

As is expected, those citizens who disapprove of this presidency include large numbers of Republicans. But those Republicans are increasingly joined by Democrats, including those once regarded as stalwarts of that party: blacks, Hispanics, and women.

In addition, the richest person in the world, Elon Musk, recently walked away from the party of Biden, declaring he would vote for Florida’s Gov. Ron DeSantis should that Republican run for president. Musk also cast a vote for Republican Mayra Flores in a special congressional race in South Texas. In a district that had voted Democrat for over 150 years, Flores won that contest with 51 percent of the vote. Once again, we see President Biden’s secret efforts to end divisions among Americans at work!

We often hear that Americans are divided as never before, that we are on the brink of civil war or that the country is in danger of breaking apart into Blue- or Red-state enclaves. But if President Biden’s big tent—his “Let’s Go Brandon” secret strategy—works, we should thank our lucky stars for this man’s self-sacrifice for the greater good. Let’s remember to also give credit for this heroic reunification effort to officials in his administration and to certain members of Congress.

This is truly the strategy of a grand master. As the old saying goes, misery loves company, and President Biden and his gang, obviously familiar with that adage, have made sure there is plenty of misery so as to attract plenty of company. I’m telling you, the man is a genius.

So, the next time you feel inclined to join your friends in slamming Joe Biden, pause first to raise a glass and offer a toast: “Thank you, Mr. President, for all you have done to bring us back together.”