Ignore the Headlines: Community Is Still Alive in America 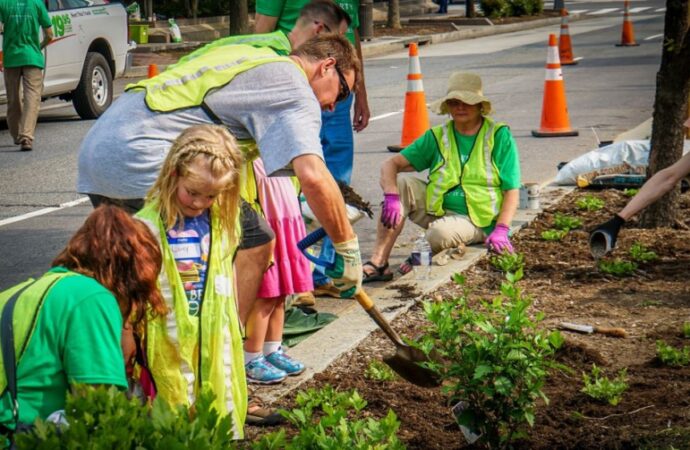 Laid up by some broken ribs, I recently spent some of my evenings watching a Hallmark series, “Cedar Cove.” (Yes, you read that correctly: Hallmark. Everybody chuckle, and then we’ll move along.) I don’t own a television or subscribe to any online movie outfits, but a DVD featuring Andie MacDowell, an actress I admire, caught my eye in the public library, so I toted it home.

Cedar Cove, a fictional town set on the Puget Sound, is home to Judge Olivia Lockhart (MacDowell), who acts as the town’s conscience. The recently arrived editor of the local newspaper woos her, she worries over the love life of her 20-something daughter, and she enjoys some adventures with her best friend from childhood. Each episode brings some fresh dilemma: a greedy developer who wants to tear down the lighthouse, romances firing up or dying to embers, an ex-con falsely accused of a crime.

The show has its flaws. But overall Cedar Cove is lighthearted fare compared to many such entertainments, and for me, just what the doctor ordered. If nothing else, it was a relief to watch a show with no obscenities, no political posturing, no panting men and women grappling with each other in the bedroom.

But what snagged my attention from the first episode was the community spirit of Cedar Cove.

Like the line from the old television show “Cheers,” in Cedar Cove “everybody knows your name”—and also your business, as gossip and rumor fly like the wind through the streets. Yet the townspeople also connect with one another. They pitch in to rescue the library when it’s threatened by budget cuts, organize a protest to save the lighthouse, and rally round when a neighbor falls sick or runs into trouble.

Given today’s atomized culture, some watching “Cedar Cove” will undoubtedly find this sense of community saccharine and bogus, or at least idealized. But I know for a fact such places have existed. In tiny Boonville, North Carolina, where I spent my elementary school years, we knew our neighbors and all the town’s merchants, the adults watched out for the children—and there were scads of us—and despite the repugnant segregation of those days, even some blacks and whites became friends.

Yet that sense of belonging, of a shared communal existence, has changed in the last 50 years. The clubs, churches, and even recreational activities, political scientist Robert Putnam points out in Bowling Alone, are nowadays a faded remnant of the part they played in American life from the 1930s to the early 1960s. Today’s extreme political and cultural acrimony underscore the breakdown in these connections among Americans.

Further enabling this decline in communal relationships is the widespread use of social media. The benefits here—joining an online discussion group with likeminded people, staying in contact with friends, and even making new friends—are many, but can these digital interactions really replace face-to-face encounters? The recent pandemic failures of online learning for school children would suggest the answer to that question is a resounding NO.

Experience gives us the same answer. When we meet a friend in a coffeeshop rather than on a screen, we sit opposite each other at a table surrounded by the scents, sounds, and sights of the café, with the possibility that another acquaintance may interrupt the conversation. If we are grieving, that screen allows no comforting touch of a friend’s hand; if we fall silent for a time, as we might in the café, the machine seems to demand words.

Despite all the dire predictions and observations, grassroots communities keep popping up. My church, for example, sponsors activity and discussion groups for men and women, young and old. My public library offers an array of clubs and meetings aimed at children and adults alike. The town boasts plenty of volunteer groups ranging from food pantries to pro-life work. You’ll also find book and gardening clubs here, where friendship thrives along with stories read and flowers planted and nourished.  Even within my own family there’s a special camaraderie among my four children, who meet every Thursday evening by phone to discuss a particular Bible passage.

Almost 200 years ago in Democracy in America, Alexis de Tocqueville noted the American passion for forming “associations,” social, civic, and political groups for the betterment of the individual and the culture. This same tendency possesses us today. And whether we recognize it or not, these volunteer clubs, assemblies, and organizations, free from government regulation or interference, constitute tiny outposts of liberty, comradeship, and joy even in these dark days of our republic.