A Once-in-a Lifetime Event: Giving Our Children a Childhood 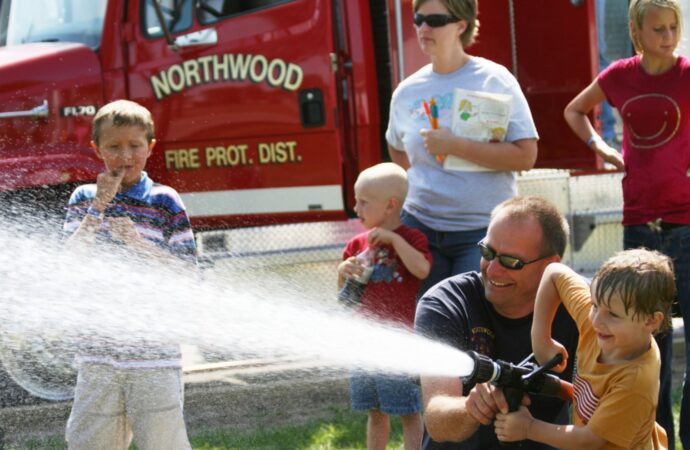 I was on my way home the other day when I saw a fire truck at the local rec park. As I passed, I saw a female firefighter holding a hose and spraying water over a mob of squealing, laughing little kids. I quickly swung into the parking lot, pulled up near the rig, and watched.

And there I saw pure unadulterated joy.

There were 60 or more kids in bathing suits on the grass beside the lot. I rolled down my windows and just listened for a minute or two to those peals of laughter and shrieks, and watched as soaking-wet kids dashed in and out of the plumes of water.

Getting out of the car, I walked over to a woman who seemed in charge and who identified herself as one of the kindergarten teachers at the nearby elementary school. This was one of the last events of the school year, she explained, and after all the excitement the boys and girls would join a group of parents under a nearby shelter for lunch.

I observed this wonderful aquatic chaos for a couple more minutes, laughing like a fool with delight, and though I wanted to stay longer, I soon drove away, as we live in an age where an old guy watching school children raises suspicions.

The joy I collected from that spectacle rode home with me and stayed in my heart through the afternoon and into the evening. Every once in a while, I chuckled just thinking about those kindergarteners. The immense pleasure of those few minutes gave rise to thoughts about children and the burdens today’s culture is placing on them. That crew in the park was having a blast, running and jumping, just little kids being kids.

But some adults seem determined to snatch away that sense of wonder and joy, replacing it with fear and confusion. Do six-year-olds, for example, really need to know about doomsday climate change, an as-yet unproven theory? Do eight-year-olds benefit by being taught they’ll be judged for the rest of their lives by the color of their skin? (No one in that crowd being sprayed by the hose seemed to pay any attention to the pigmentation of their classmates.) And what sort of people favor introducing elementary school kids to sex education and gender identity? And why?

Little kids are already afraid of hobgoblins and monsters under the bed. Do adults really wish to add to those terrors and so kill off the innocence of childhood?

Fortunately, the answer to that question is no.

Plenty of families I know make every effort to give their sons and daughters a childhood free of the daily traumas inflicted on the rest of us by our culture. They monitor the books their children read and the movies they watch, they strictly supervise and limit their time on computers and phones, they read them poetry and fairy tales, and tell them bedtime stories. They watch what they say when discussing culture and politics in front of the kids. They work to instill virtues in their offspring while keeping them as free as possible from the vices of adulthood until they have reached the age of reason.

Of course, these moms and dads have their work cut out for them. Sex, cynicism, sarcasm, and obscenity are mainstays in our entertainment industry. Parents must keep constant watch over outside influences on their children: friends, the classroom, our public libraries, summer camps and sports teams, and more. Even other parents deserve scrutiny. In her article on “groomers” and gay pride parades, for example, Paula Bolyard points out that some people are fine with their children attending these events and finding amusement in such sights as “Beanie Babies with giant penises on them.”

As their children mature, the moms and dads who safeguarded their children’s innocence will teach them about love and sexuality. They will help their young people understand that the world can be tough, that plans fall apart, and that good does not always triumph over evil.

Meanwhile, these parents know in their heart of hearts that childhood is the time when the imagination sprouts wings and flies. It’s the time when the world can and should seem magical and sweet, loving and just. It’s the time when children recognize Mommy and Daddy as defenders of the realm who are there to protect, defend, and care for them, to kiss a scraped knee or to chase away bad dreams in the middle of the night.

Children get only one childhood. Let’s make sure we give it to them.