Sabotaging America’s Military From Within 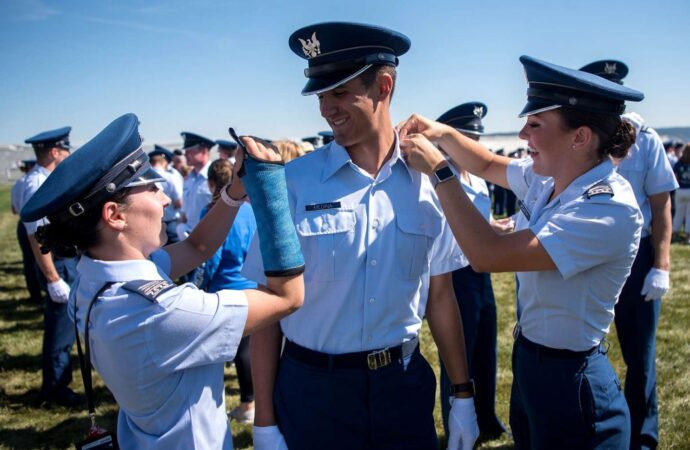 In woke, broke America, our military no longer liberates the oppressed. It oppresses the liberated.

A year ago this month, a comparison of military recruitment ads from China, Russia, and the U.S. went viral on social media. Our foreign competitors wooed their potential enlistees with muscular appeals to national pride and protection of the traditional nuclear family. A U.S. Army promotional campaign, by contrast, featured a pastel-hued cartoon depiction of a female soldier named “Emma” who marched in a gay pride parade with her two mothers and became a soldier to “shatter some stereotypes.”

Wokeness is a terminal cancer in our armed forces, eroding the foundational bones of its honor-bound institutions and ravaging the core values of generations of America’s frontline fighters. Integrity, honor, personal courage, excellence and commitment to truth have been subjugated to the progressive false gods of diversity, equity and inclusion. Who needs outside threats to our troops when the most lethal saboteurs are embedded inside the bowels of our own Pentagon and service academies?

“Diversity,” of course, is exclusively defined by selective skin color and politically correct pronouns. “Equity” is a farce if you are white, male, Christian, and patriotic. “Inclusion” is a grand illusion. Nowhere are these toxic realities more clearly illustrated than in the American military bureaucracy’s vindictive witch hunt against our best and brightest soldiers, Marines, sailors, airmen, and Coasties who have resisted the COVID-19 jab.

“I’m frustrated,” Air Force Academy cadet Nathan Suess told me on Monday in Colorado Springs, Colorado, as he braced for punishment and retaliation during graduation week. The 21-year-old civil engineering major is one of four seniors who objected to the COVID-19 vaccine because of their deeply-held religious beliefs—as well as on irrefutable scientific and legal grounds. Suess quietly filed his religious exemption request last fall as a “devout follower of God,” citing aborted fetal cell lines used to develop the shots; the low mortality rate among young, healthy active-duty personnel; more than 600,000 adverse vaccine reactions reported to the government, including permanent heart damage among young men; and the illegality of mandating experimental vaccines not fully approved by the Food and Drug Administration and undermining informed consent (as determined by courts that ordered the suspension of the military’s anthrax vaccine mandate in 2004).

“I could not dirty my conscience” by obeying an unlawful order undergirded by “deception and dishonesty,” Suess told me.

Suess and his fellow objectors were left in the dark about their fate until last week, when the Academy publicly outed and humiliated the quartet—threatening to force them to reimburse their tax-subsidized tuition (upwards of $200,000) and denying them military commissions. The Air Force Academy, increasingly infiltrated by radical leftists who require critical race theory brainwashing and subsidize pagan, witch, and Wiccan worship on campus, is the only one of the military academies imposing such draconian penalties.

The self-described “Navy brat” from a family with three generations of veterans believes “critical thinking is imperative for officers.” Joining the Air Force was Suess’ “biggest high school goal.” But he now feels “ostracized” and betrayed by leaders who have “made everything up on the spot” in defense of sham science and unconstitutional orders. “This is tyranny at its finest,” he lamented as he packed his bags this past weekend, but he vows to fight it on behalf of other peers.

“We do not swear an oath to obey our leaders,” Suess declared defiantly. “The Constitution always comes before military mandates.”

Suess is not alone. As a federal judge in Texas ruled in January in halting punishment for 35 Navy special ops members who refused the COVID-19 shots, “There is no military exclusion from our Constitution … There is no COVID-19 exception to the First Amendment.” And just this week, a secretive Navy Administrative Board ruled unanimously that Lt. Col. Bill Moseley, a Navy weapons specialist with 22 years of active-duty service, was not guilty of “misconduct” for refusing to obey a direct order to submit to the COVID-19 jab because of his religious objections.

Conveniently, the full ruling is hidden by a convoluted military process that only discloses results when dissenters’ challenges fail. But Moseley’s attorney, R. Davis Younts (who himself served 12 years active-duty in the Air Force and in the Judge Advocate General’s Corps), was able to tell me this week that “it was very clear that the board had legitimate concerns about the lawfulness of the order and whether the vaccine mandate was reasonably necessary to accomplish” the Navy’s mission. “We are supposed to be free-thinking and use our discretion. We are legally bound to challenge unlawful orders.”

Younts, a lieutenant colonel in the Air Force reserves, is now defending more than 50 military clients fighting to protect their faith. He has filed his own religious exemption request from the COVID-19 shots as well. “This is a very personal fight for me,” he revealed, and “it’s not just about the vaccine … It’s a very difficult time in the military today for people of Christian faith who hold to Biblical teachings.”

But in woke, broke America, our military no longer liberates the oppressed. It oppresses the liberated. And all our enemies laugh mightily at our self-inflicted civilizational wounds.