Trouble in Paradise: Radicalizing Our Libraries 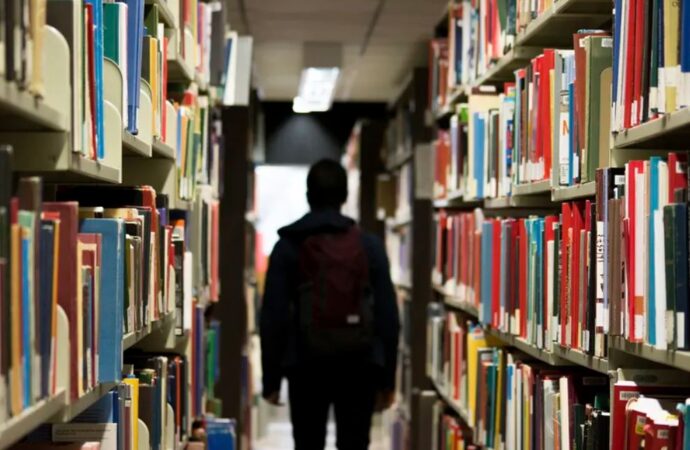 I have always imagined that Paradise will be a kind of library.

From the bookmobile that used to park weekly on our street in tiny Boonville, North Carolina to the library stacks of my college and graduate school years, libraries have always felt like a second home to me. If I drive past a library in a small town I often pull into the parking lot and go inside to take a look around. I breathe in that bookish air, wander about touching the spines of books, explore the “newly arrived” section, and savor the quietude.

Bibliothecaphile doesn’t exist as a word, but if it did, it would describe me to a T: “library lover.”

The Samuels Library here in Front Royal, Virginia is a particular delight. It offers a vestibule with five tables for sitting, eating, or working on a laptop. The children’s room is spacious, well-stocked, and kid-friendly with decorations and toys. There’s a decent collection of adult fare, lots of programs for young and old alike, and a helpful and friendly staff. The best part of my visits—and this happens frequently—occurs when I spot a family of homeschoolers staggering toward the checkout desk with cloth bags and cardboard boxes loaded to the brim with books.

Which is why the newly-elected president of the American Library Association troubles me.

Self-described “Marxist lesbian” Emily Drabinski is the American Library Association’s presidential pick, Joy Pullman writes in The Federalist. On winning the election, Drabinski posted about herself on Twitter, “I just cannot believe that a Marxist lesbian who believes that collective power is possible to build and can be wielded for a better world is the president-elect … I am so excited for what we will do together. Solidarity!”

According to Pullman, Drabinski posts openly “in support of sexually exposing children, union-led political strife, socialist politicians, and libraries pushing explicit and far-left material on unwilling taxpayers.” In one 2021 lecture to other librarians, she stated that “queerness includes the subversion of those kinds of normal family types,” meaning husbands, wives, and children.

Drabinski’s plans for undermining families and our culture through our libraries pinpoint the arrogance and wrongdoing of so many in power today. All too often these people assume control of an office, but instead of fulfilling their duties, they bring their own agenda to the job.

Drabinski seems tone-deaf to the unpopularity of her ideas among parents and ordinary Americans. Moreover, her election win in no way gives her a mandate for her schemes. The ALA has over 54,000 members. Drabinski won the election against one opponent with a total count of 5,410 votes, about 10 percent of the membership. That less than resounding victory would be laughable were it not for the damage she can do.

She also seems unaware that the Americans for whom she shows such scorn are the very ones footing the bill for libraries. As Pullman tells us, ALA’s members “include librarians, libraries, library graduate schools, members of library boards and associations, and library students. The vast majority of its membership fees, therefore, are provided by taxpayer funds.”

Our public libraries, our public school libraries, and most of our college and university libraries are primarily supported by taxpayers. Like my library here, they are supposed to cater to a community, not act as vehicles to bring about Marxist revolution or promote gender and critical race theory. The books of such conservative writers as Thomas Sowell, Mark Steyn, and Michelle Malkin should stand alongside the works of those progressive writers Emily Drabinski might recommend. Drabinski, like some of our other officials, has clearly forgotten that she is supposed to be working for all librarians and their patrons, not pushing Marxist ideologies.

Here’s one bit of good news. Drabinski’s public embrace of radicalism and her desire to dismantle the United States for its “capitalism, racism, and patriarchy” are indicative of a strategic shift by the far left in today’s America. Drabinski and so many others like her no longer work behind the scenes to destroy our culture, termites gnawing away in the dark on America’s foundations, but instead openly act as wrecking balls hoping to bring down the country. For those of us who love both our libraries and our liberties, the enemy is now in full view.

The American Library Association has disgraced itself by electing this person as its president. In the meantime, the rest of us can keep an eye on our libraries, and protest if and when they follow Emily Drabinski’s lead.