Food Fight: We Made the Mess We’re Now In 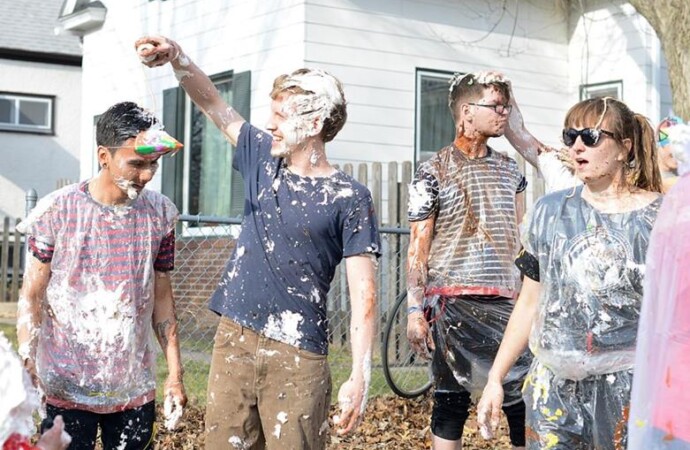 “Essen!” the old man shouted at me when I refused his wife’s offer of seconds on my supper plate. “Immer essen!” My German was terrible, but I understood him: “Always eat!”

It was 1978, and while staying with a friend in Switzerland, my wife Kris and I had met a young German couple who were students at the nearby University of Konstanz and who invited us to visit their hometown, Nuremberg, for a few days. We bedded down with Hermann and his parents, joining them for two suppers before returning to Switzerland. At both meals, Hermann’s father urged me to eat: “Essen! Immer essen!”

And I think I know why.

Our host had served on the Russian front during World War II. Wounded, he’d lost both of his legs just above the knee. He owned a wheelchair, but he also got around by riding a skateboard and pushing himself with his hands through the house or along the paved driveway. And I think it’s safe to say that while serving in that hellhole of war this man had missed a few meals. In fact, I’m sure he had shaken hands with hunger and near-starvation.

Right now, the scarcity of basic foods is causing a rise in hunger and starvation in many places around the world. More people are dying from hunger than from COVID-19, the Christian organization World Vision reports. Global food prices have contributed to this disaster. In South Sudan, for example, the cost of a bunch of bananas is more than half the average daily wage in that country.

Though circumstances in more affluent countries are not as dire, inflation and shortages have taken a bite out of the budget for many around the world, and even Americans may soon face shortages of grocery store products once taken for granted. In late March, President Joe Biden announced that food may be scarce—and “it’s gonna be real.”

Biden and other world leaders have blamed the war in Ukraine for these shortfalls, and there is some truth to that position. Russia and Ukraine are both enormous producers of wheat, fertilizers, and other agricultural produce, and the war has severely diminished the production and shipping of these goods.

But this is not the whole story. The Biden administration has also blamed inflation and shortages on COVID-19, whereas the truth is that government-forced lockdowns and mandates in the U.S. and elsewhere, not the virus, damaged our workforce, crippled global and national shipping lanes, and increased our dependence on other countries for foods and fertilizer. In particular, the Biden administration’s attacks on fossil fuels have also accounted for fewer food goods and higher prices in the grocery store, as the rising cost of fuel affects the abilities of farmers to grow crops and truckers to get foodstuffs to our grocery stores.

As a result, most Americans find themselves scrabbling to put certain victuals on the dining room table. Beef, for example, is already becoming too expensive for many families, especially those with several children. In a December article about these rising costs, writer LaKeisha Fleming reports that her “beloved salmon fillets” are not “affordable in my house anymore.” Fleming then writes:

In fact, experts say food costs worldwide have been soaring. ‘Consumers are spending about 20% more on food now than they were before the pandemic,’ states Melissa Walsh, CFA, CFP, AIF, founder and president of Clarity Financial Design. ‘With food and energy prices both going up, families are noticing that their paychecks are stretched by trips to the grocery store and the pump,’ she notes.

Keep in mind: Fleming’s article appeared several months ago. Since then, the situation has only worsened.

Author, classicist, and commentator Victor Davis Hanson pointed to the many great strengths of America in a recent interview. “We were the largest producer of gas and oil in the world until two years ago,” he said. He noted that in science and mathematics, American universities remain the best in the world, our military is strong, and “in food production we’re the most efficient.”

So, what happened? First, perhaps the globalism our leaders have chased for the last three decades is not as beneficial as it’s made out to be. When a war in Ukraine can threaten the world’s food and fertilizer supplies, maybe it’s time to rethink American dependency on other nations for essential goods.

The second problem occurs much closer to home. As Hanson and others have remarked, leftist policies, particularly those pursued and enacted in the 21st century, have undermined American morale and production. A country sitting on a sea of fossil fuels, for instance, shouldn’t have to go begging for those fuels from places like Venezuela or the Middle East.

Our own leaders, not just Vladimir Putin, are responsible for our inflation and shortages.