What’s in a Name: The Brandon Phenomenon 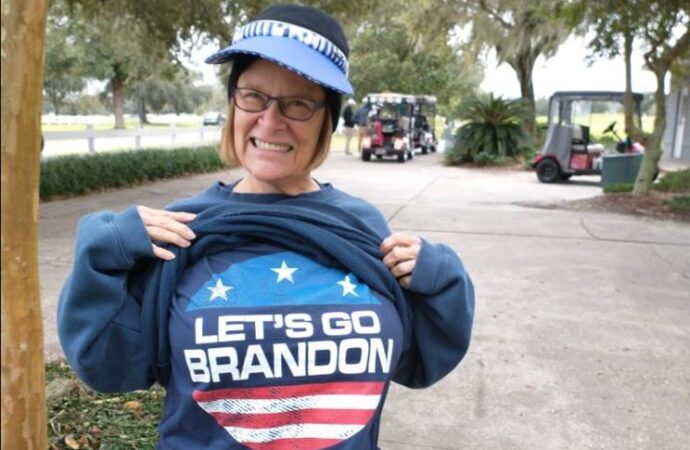 By now, most readers know the meaning hidden in those three words. If you don’t, Google them or ask an acquaintance. I’m trying to avoid the F-bomb here.

Throughout the fall, football stadiums across the country have reverberated with that chant and its cruder counterpart. Some entrepreneurs have stitched them onto T-shirts and baseball caps. Four “Let’s Go Brandon” songs have won a good number of listeners, and the meme even made it to the floor of the House of Representatives. Upset with the rising prices of cheese and toppings, a Florida pizzeria has gotten into the act, selling its pies with the pepperoni lettering “FJB.”

This sing-song chanting with its deep disdain for our sitting president and his policies seems a unique political phenomenon, at least in my lifetime. Back in the 1960s, protestors against the Vietnam War and President Lyndon Johnson’s administration used to shout out “Hey, hey, LBJ! How many kids did you kill today?” but that anti-war cry was pretty much restricted to hippies and college kids. Today’s mantra has attracted a much wider audience.

There are reasons for the broad appeal of “Let’s go, Brandon,” namely, the many failures of the Biden administration. The president’s approval rating among voters has tanked to 38 percent. Vice President Kamala Harris’s numbers are even more dismal, hovering around 28 percent, the lowest of any vice president in modern times. When a recent poll asked what should be “the single most important goal of Biden over the next year” in a recent poll, fully 20 percent of participants declared that he should “retire/resign/quit.” The economy and jobs came in at a distant second with 11 percent citing them as a primary concern.

This Brandon meme became popular when a reporter was interviewing NASCAR driver Brandon Brown after a win at the track. With the crowd loudly shouting its anti-Biden chant, the reporter decided to interpret the uproar as “Let’s go, Brandon!” And so the chant and the meme were born.

I’ve wondered how Brandon Brown feels about this chant. I suppose part of his response might depend on his politics, but he must also know that “Let’s Go, Brandon” has tremendously boosted his name recognition.

I’ve also wondered how I might feel if half the nation was chanting, “Let’s go, Jeffrey!” Given my thoughts about the Biden administration, I suppose I wouldn’t mind that chant in regard to my politics. But how would I feel when I visited the local grocery store, and some customer spotted me and cried out, “Let’s go, Jeffrey!” How would I feel if, when I entered the coffee shop, the staff, most of whom I would guess belong in a different political camp than I, took up that chant?

It might be amusing at first, but after a while I suspect that grin would be painfully plastered to my face.

Besides, Jeffrey just doesn’t work. Listen to those hard consonants in “Brandon,” and then compare them to the soft ones—the j, double ff, and y—in Jeffrey. Brandon is strong, and Jeffrey is weak. Brandon wins hands down.

Meanwhile, some supporters of the president have come up with a counter chant: “Thank you, Brandon!” Given our skyrocketing prices of food, heating fuel, and gasoline—along with a broken supply-chain—this copycat rebuttal will likely die a quiet death by Christmas.

Mockery is always an effective weapon against prudes, the self-righteous, and tyrants. Saul Alinsky’s Rules for Radicals, the leftist handbook that has influenced so many of our progressive politicians, points this out. “‘Ridicule is man’s most potent weapon,’ Rule 5 notes. “There’s no defense. It’s irrational. It’s infuriating. It also works as a key pressure point to force the enemy into concessions.”

For years, the left has used derision as a weapon against their opponents.

But ridicule is a blade that cuts both ways.

“I hear America singing,” Walt Whitman wrote in a poem by the same name.