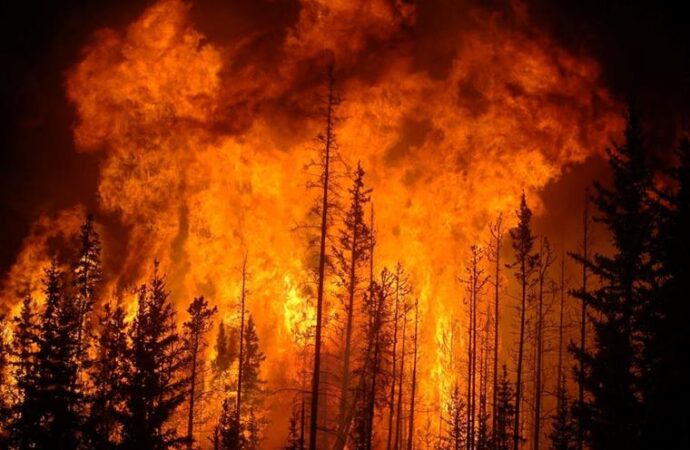 Representatives from around the world are set to gather in the United Kingdom this weekend for the UN Climate Change Conference. Already projected as a disappointment because leaders from key greenhouse-gas-emitting countries such as Russia and China will not make an appearance, Reuters declares that “attendees need to reset their expectations.”

Climate change activists also might do well to reset their expectations on other issues, particularly in cases where climate change is wrongly cited as the underlying cause. Consider the recent large, destructive wildfires in California, which activists blame on drought caused by global warming. The data suggest otherwise.

Recent research indicates that it is actually the stringent disallowance of controlled burns that is contributing to today’s wildfires.  Fire suppression without controlled burns is the official United States forestry policy, which results in a build-up of dry underbrush over time. Such accumulated underbrush serves as kindling that can propel a wildfire into an extreme megafire.

The U.S. learned that lesson the hard way 150 years ago in the little town of Peshtigo, Wisconsin. The town sported a booming lumber business, a population of 2,000 people, and a forest described as “overflowing with trees,” and “so dense that men had a hard time walking through it.” During the summer of 1871 weather in the Midwest was exceptionally hot and dry. By late September and early October, wildfires were raging from the Dakota Territory to Lake Michigan in the east and Canada in the north.

Near Peshtigo there had been only one day of rain in three scorching months, and smoke blowing in from Minnesota fires further dried the area. Conditions were so parched that fire patrols were established to extinguish fires started by sparks from passing locomotives. The dark smoke in the air was so thick that during late September and early October the lighthouse off the shore of nearby Green Bay, Wisconsin, was left on even during the day. The weather was so dry that Peshtigo loggers had no choice but to let felled timber pile up, since the river levels were too low to support sending the logs downstream. Together with thousands of acres of dry kindling in forests that had been extensively logged, there was plenty of fuel for any fire that might start.

Suddenly, on Oct. 8, 1871, massive winds combined numerous smaller fires into a deadly inferno that engulfed the area, where a wall of fire over 100 miles long destroyed 1.5 million acres of forest and 17 towns. Massive trees were burned, roots and all, with fire extending three feet into the ground. After the fire, some railroad lanes were marked only by twisted steel bars where tracks had once been, with all of the wooden ties turned to ash. In one case, all that remained of a loaded train were the wheels fused to the twisted tracks—everything else had been incinerated and blown away. Flying birds were burned alive as they attempted their escape, and later, thousands of forest animals were found suffocated to death.

The conflagration jumped across the Peshtigo River, terrifying the people who had gone to the river for safety and causing them to repeatedly submerge themselves, rising only to find the air still filled with fire. “The flames darted over the river as they did over the land, the air was full of them, or rather the air itself was on fire,” reported Father Peter Pernin, a Catholic priest in Peshtigo.

The area of near-total destruction was 1.2 times the size of Delaware and 2.3 times the size of Rhode Island. Over two billion trees were burned to the ground, and the fire was still burning under the ground in peat bogs for over a year, emitting smoke even in the winter.The death toll among settlers has never been determined, but it is estimated that between 1,200-2,400 settlers, loggers, and railway personnel perished, making it by far the worst forest fire in American history in terms of the loss of human life. The death count was likely much worse, as official numbers do not even include the deaths of the Menominee and Chippewa (Ojibwe) peoples, whose numbers and whereabouts were never recorded.

A mass grave for nearly 400 people was hastily put into place for the victims who could not be identified. There weren’t enough people left alive in Peshtigo who could identify all of the remains. For several years after the fire, remains of survivors kept being found in creeks and rivers. In one well alone, 32 bodies were discovered. The fire had the heat of a crematorium (2,000 degrees Fahrenheit), turning sand to glass and incinerating its victims. In many cases, their ashes simply blew away with the wind.

Two other major fires occurred simultaneously with the Peshtigo fire. The Great Michigan Fires burned over 2.5 million acres with a loss of nearly 500 lives, and the Great Chicago Fire, better known than the others, resulted in a loss of around 300 lives. However, this “forgotten fire” at Peshtigo ranks near the top of natural disasters in the United States, alongside the Johnstown Flood of 1889 and the fire that followed the San Francisco Earthquake of 1906.

We need to learn from the past: the forgotten Peshtigo fire should be seen as an example of how underbrush can trigger mega wildfires such as those we’ve seen recently in California. After an enormous wildfire in 1962, Australia implemented a decade of intense controlled burnings which dramatically suppressed the number of fires.  However, once the practice was stopped, the out-of-control fires returned.

To place the blame for mega wildfires on climate change is to to ignore the root cause of the problem: our damaging, but enduring, bureaucratic forest management policies. Unfortunately, this focus on climate change as a politically convenient scapegoat for destructive fires is likely to continue at this year’s UN climate conference.