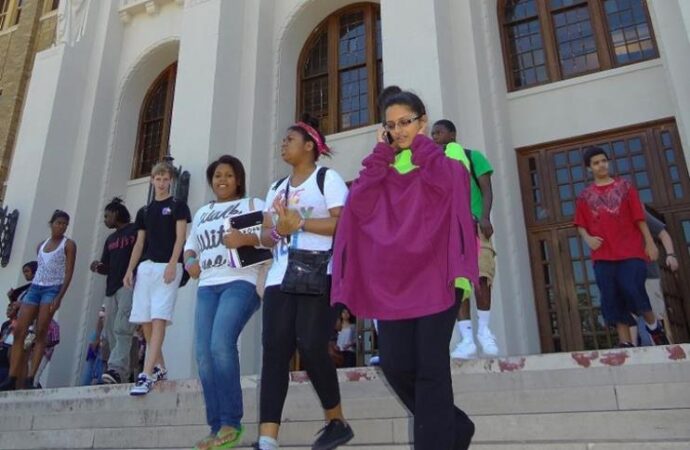 Many parents pulled their children out of school last year for homeschooling and other private options, as schools remained shuttered due to the coronavirus response. Nationwide, homeschooling numbers tripled last year from their pre-pandemic levels, driven largely by black families who left district schools for homeschooling at the highest rate of any demographic group and are now over-represented in the homeschooling population compared to K-12 public schools. With most schools open for full-time, in-person learning this year, it seemed reasonable to assume that parents would eagerly re-enroll their children in their local district school, tabling last year’s alternative education plans.

The enrollment decline for L.A. public schools was captured as of September 17, which was the fifth Friday of the new school year, or the day the district annually counts student enrollment. This was just after the Los Angeles school board mandated the COVID-19 vaccine for all eligible public school students, and before California Governor Gavin Newsom announced that all students in the state would be required to be injected with the new vaccine.

As I wrote last month, these COVID-19 vaccine mandates for children and adolescents will likely lead to more parents fleeing public schools for private learning models, particularly as new data emerges about the link between the COVID-19 vaccine and higher rates of myocarditis in teenage boys and young men.

“Boys between 16 and 19 years of age had the highest incidence of myocarditis after the second dose,” The New York Times reported last week, so it’s understandable that many parents may be reluctant to have their children get the COVID shot. “The risk of heart problems in boys of that age was about nine times higher than in unvaccinated boys of the same age,” added the Times.

With 20-30 percent of Los Angeles teachers and staff currently not on track to meet the district’s October 15 vaccination deadline, fewer students may alleviate some of the pending staffing shortages resulting from those who are terminated for not getting vaccinated. The district is already contending with 2,000 unfilled positions and a dearth of applicants.

L.A. isn’t the only large school district seeing dwindling numbers of students. New Chicago data reveal that district enrollment is down by 10,000 students this year, on top of the 14,500 students the school system lost last year.

According to Chicago NPR: “The reasons for the declines are many, experts say, including demographic changes in the city as well as the pandemic and the upheaval it caused, which may have motivated some parents to pull their children from the school district.”

More Chicago parents are continuing to homeschool their children, and local Catholic schools and other private schools are experiencing enrollment boosts, NPR reported.

Last year, public school enrollment dropped an average of 3 percent nationwide, as parents turned to homeschooling and private schools, or delayed kindergarten entry. Most districts were given an enrollment reprieve, freezing school funding at 2019/2020 spending levels in the wake of the pandemic response. But this year, headcount matters. In Detroit, “count day” occurred last Wednesday and will determine how many students are currently attending the city’s public schools and how much funding they will get. District officials resorted to bribery, offering Detroit Pistons basketball tickets to students to make sure they were in attendance so as to secure higher funding levels.

“At a high level, our main results are in line with a growing set of reports that the pandemic caused an unprecedented shift away from the public education sector, particularly for Black, low-income and kindergarten students,” researchers concluded.

In Seattle, the 1,300 fewer students enrolled in the district this fall will likely cost the public schools approximately $28 million in state funding. Smaller school districts are also experiencing enrollment declines along with a corresponding dip in funding. In West Virginia, Marion County student enrollment is down 230 students this year and the district is set to lose $1 million in school funding as a result. Many students in the district shifted to homeschooling, which has grown to 730 students from about 500 students in a typical year.

The NBER researchers suggest that the pandemic-induced shift away from public schooling is likely to be long-lasting and will have enduring effects on funding.

“These enrollment changes also have clear longer-term fiscal implications for the public school sector and educational consequences for students. To the extent that a large percentage of students remain enrolled in alternative sectors, public school systems will face unprecedented drops in funding,” the researchers conclude.

This is an ideal time for state legislatures to implement school choice policies, such as education savings accounts, vouchers, and tax-credit scholarship programs, to enable education dollars to follow students instead of funding bureaucratic school systems. Indeed, nearly three-quarters of U.S. taxpayers now support education choice policies, and it has been a banner year for school choice, with many states introducing or strengthening choice policies.

These policies make it easier for parents to access the best education option for their children, extending learning choices beyond a district school assignment.

Privatization Is a Good Thing

Some commentators look upon the current public schooling exodus with dread and criticize the ongoing privatization of education. This sense of doom is misguided. We don’t have government-run grocery stores assigned to families by their zip code, and food is even more important than education from a survival standpoint.

What we do have is a wide assortment of private grocery stores, farmers’ markets, and other private, commercial spaces from which consumers choose to buy food. For families in need, taxpayers fund food stamps and similar food-assistance programs that enable consumers to use taxpayer dollars in the form of vouchers to purchase food at the private market of their choice. This is a widely accepted model as it relates to food, but is somehow excoriated when applied to education.

The current momentum away from government-run schools and toward private education options should be welcomed and embraced. Weakening the government’s monopoly position on education and enabling a flourishing free market of learning opportunities will expand choices for families in much the same way as it does in all other areas of our lives. We don’t have government-run car dealerships, or hair salons, or shoe stores, and yet we are able to buy a car, get our hair cut, and purchase shoes that meet our preferences thanks to a vibrant free market.

As FEE’s founder Leonard Read wrote in his 1964 essay, a truly free market in education would unleash creativity, possibility, and efficiency, just as it has in all other sectors. According to Read:

Creative thought on education would manifest itself in millions of individuals. Such genius as we potentially and compositely pos­sess would assert itself and take the place of deadening restraints. Any person who understands the free market knows, without any qualification whatsoever, that there would be more education and bet­ter education. And a person with a faith in free men is confident that the costs per unit of learning accomplished would be far less.

Far from being worrying, the current exodus from public schools is a positive educational change that is good for families, students, and taxpayers alike. As the government’s grip on education loosens, entrepreneurs are stepping in to create new learning models and schooling alternatives that provide the personalization, flexibility, and variety that we expect in all other parts of our lives. Prompted by the pandemic response that exposed the glaring inadequacies of government schooling, more parents now demand more education choices. Buoyed by an expanding free market in education, these parents and their children will enjoy an abundance of educational solutions in the years to come.