A Look Behind the Barriers at George Floyd Square 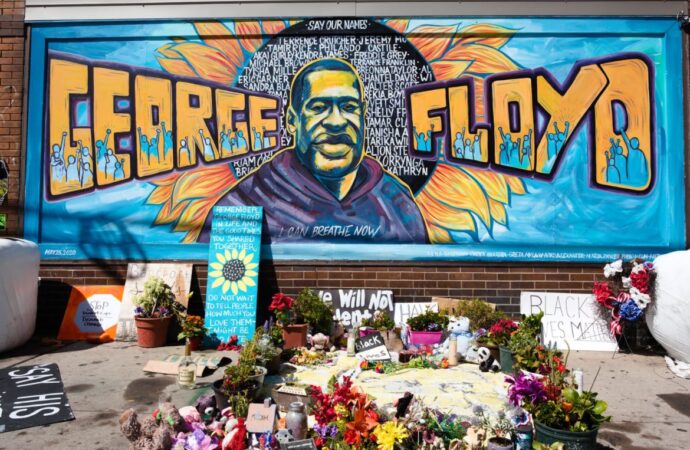 In recent days, various reporters have been turned away from the now infamous “George Floyd Square” as they tried to film or report from the scene. The area where Floyd died in May of 2020, setting off a chain reaction of riots across the country, has now become an autonomous, no-go zone, dangerous for any but the approved to enter.

Like so many people around the world, I watched in horror as Minneapolis was attacked by well-organized rioters and engulfed in flames last year following the death of George Floyd. I was born in the City of Lakes and lived, studied, and played in Minneapolis until leaving for law school. Now I avoid the city.

With the Chauvin murder trial underway, and the police chief calling for the lawless memorial zone to be cleared and secured, I thought I would share some observations and photos I took when I visited the area several months ago.

I did not go down to ground zero, aka “George Floyd Square,” right away. I did not want to just gawk. I could have pitched in on the cleanup, as so many good people did, but it felt too dangerous, so I waited until a gray Saturday in October and went with a brave male friend to see the site for myself.

In retrospect, it was probably stupid to go to a place featuring a giant fist as the center of the memorial—despite all the lovely flowers and plants. My companion and I were both dressed in non-descript clothes which probably screamed “white suburban tourists,” but other than an uneasy encounter with three women, our presence did not seem to be of interest to anyone that afternoon.

As I peeked into Cup Foods and walked around the Square, I was surprised at the smaller scale of the now world-famous murals that appeared almost overnight. I was expecting billboard-sized paintings, but instead they fit on part of a building wall.

The thing that left me shaken was a smaller, crude sign on the sidewalk that demanded, “Say His Name.”

That phrase, now memorialized on YouTube and elsewhere, has been repeated by thugs of all stripes. “Say his name!” or, “Raise your fist!” Those who say this brazenly assault people dining outdoors or walking down the street, demanding fealty to the belief that America is a hopelessly racist country.

For myself and many Christians, “his name” refers to Jesus Christ, not to any mortal on this earth. Say His name.

Mr. Floyd, who had a violent criminal record, was quickly elevated to the status of a martyr before we knew anything about him or the facts of what really happened that tragic day. Yet who is driving that martyr narrative, and why? Do the people driving it really care about George Floyd, black people, or a unified America?

I mostly agree with those who say that Floyd’s violent criminal past is irrelevant to the question of whether he was murdered—and that we need answers from Chauvin. I say mostly—but only because Floyd may have been a known criminal to Chauvin, a veteran officer in that area. This would have affected the decisions Chauvin made that day. Hopefully, we will find out more at the trial.

Floyd’s violent and dishonest character, however, is certainly relevant to the question of whether he is a good choice for martyr status.

Conservative activist Candace Owens has made a persuasive case that Floyd is no hero and should not be venerated no matter what happened that day. Owens, and many others, have also suggested that black-on-black crime, not racism, is what hurts black Americans most, and that blacks should stop helping the elites in the media and Hollywood elevate bad guys as cultural heroes if they want that to stop.

What other names might we remember to say, instead of Mr. Floyd’s? Are there other real martyrs and heroes to emulate?

Consider pregnant mother Leneesha Columbus. On July 5, 2020, Columbus was shot and killed a block from the Square by the baby’s father; their premature baby was delivered but died. Say their names.

Alfonso Williams, a heroic neighbor who intervened to protect Laneesha and her baby, was shot in the foot. He is working with another hero, Pastor Curtis Farrar at Worldwide Outreach for Christ located in the Square, to teach young people how to live honest, godly, and peaceful lives. Pastor Farrar says, “I have been told to move from this corner, but God asked me to stay…God always starts with the church.” Amen. Say their names.

A local business owner, Dwight Alexander, goes into that war zone every day to keep his “Smoke in the Pit” barbeque business alive. This heroic grandfather told the Star Tribune, “I am afraid. I am frustrated. I am mentally ill right now…. I have to set my mind every day to come up here and try to make a way for my family… [the city] took away my rights, they took away my finances. How do you think I feel?” Pray for him and order takeout if you’re in the vicinity, but also say his name.

There are other names of law enforcement officers and innocent bystanders who have been killed or maimed in the Square (at least four people have been murdered there since May) and around the country since Floyd died on May 25, 2020, including the grandfatherly police officer, David Dorn, who was killed on Facebook Live by thugs looting a store in St. Louis. Say their names.

Who is keeping track of these tragedies, so we do not forget them? Is Antifa or BLM, or any of their powerful allies in elective office, Big Tech, academia, the church, or corporate America saying any of their names?

When you hear the name George Floyd, please say the other names.