A Lesson in Power 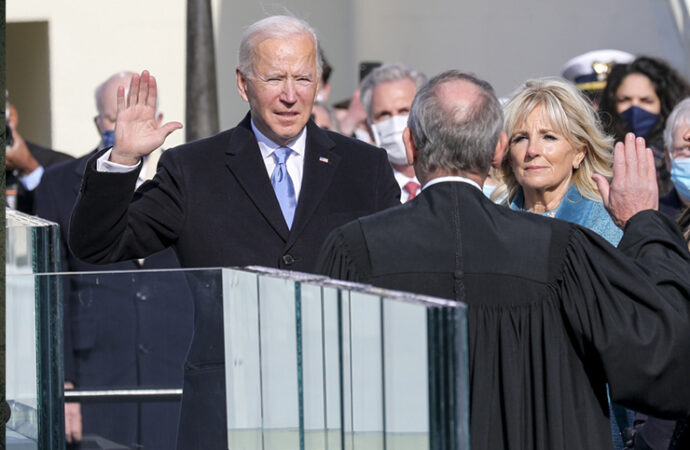 The unifying strand in conservatism as a movement and the GOP as a political operation is a superficial desire to limit and eschew power. This position is sloganized in exhortations against “big government,” against “socialism,” against the noxious fumes of power.

But movement conservatives, like their political counterparts, are quite all right with both the consolidation and exercise of virtually unlimited power, so long as it does not upset arrangements from which they benefit, or when the enemy is to their right.

Texas Governor Greg Abbott on October 23 welcomed Amazon at the grand opening of a new fulfillment center in Waco. Three months later, Amazon partook in a coordinated effort to systematically purge the internet of many right-leaning voters (i.e., people who might vote for Abbott), going so far as to boot Parler from its web-hosting services after Google and Apple removed the social media network from their app stores. Were Abbott sincerely concerned about the concentration of power in a few heavy hands, he would rescind Amazon’s welcome because the corporation is hostile to the very values Abbott, and the GOP at large, claim to cherish. Of course, he has done no such thing.

Even former White House Press Secretary Sarah Huckabee Sanders, supposedly on the bleeding edge of a new conservatism, wears the GOP’s blinders of corporate power. “The radical left’s solution is to impose government control and censorship from the top down,” she said while announcing her campaign for governor of Arkansas. “But their socialism and cancel culture will not heal America.”

“Freedom means a limited government,” tweeted Lauren Boebert, another young and bright GOP face. “What we need is to return more power to the people, not to continue to grow an oversized federal government!”

Corporations, not the federal government, have imposed control and censorship over American life while sponsoring the rise of “socialism” and the acceleration of cancel culture. What’s more, capital doesn’t mind government intervention in economic, social, and cultural life but instead welcomes and profits from those intrusions. This much is obvious, but the GOP refuses to do more than occasionally gripe about it. And when Republican officials do object, it’s often with stale talking points provided by what is now an utterly obsolete conservative commentariat.

David French, a senior editor at The Dispatch, welcomes treating some 74.2 million Americans who voted for Donald Trump as “insurgents,” as the new administration mulls a revamped Patriot Act. In response to the salvo of executive orders issued by Joe Biden in his first few days as president, French tucks tail. “A handful of bad EOs do not mean it was better to support a deranged liar who’d incite the sacking of the Capitol to hold onto power,” he said.

From his perch at National Review, Michael Brendan Dougherty offers nothing more than smug contempt for disobedient Middle Americans. To the critics on the right of an impotent conservative movement that has long contended itself with “losing with honor,” Dougherty asks: “Well what’s it like losing without it?”

Strip away the platitudes, and the conservative movement is actually obsessed with power and prestige for pet causes, most of which are petty, and some are even harmful to the “values” it claims to uphold.

Conservatives are never happier to break bread with their supposed opponents on the Left than when it comes to mocking and now persecuting unwashed Middle America. What is the plight of plebeians, so long as invitations to dinner parties, posts at think tanks, cable network spots, and columns in legacy newspapers remain open? For all their talk of “principled” opposition, conservatives would not turn down an appointment in the White House from their worst enemy.

The GOP’s current roster, on the other hand, is unwilling and unable to take meaningful action against the corporate ruling class that has descended on America because doing so threatens the funding structure of their own party. Certainly, some have dared to raise their voices—but now they are being reminded of who is really in charge, as one corporation after another pledges to cease donations or deny services to lawmakers who step out of line. If there are any good soldiers within the GOP, they are outnumbered, outgunned, and all but abandoned by their comrades.

By contrast, Democrats—and the Left in general—are visionary, largely unified, decisive, and ruthless.

“Now we take Georgia,” said Senator Chuck Schumer (D-N.Y.) in November, “then we change the world.” The new Senate majority leader spoke to an energized crowd ahead of two Georgia races that would deliver a Senate majority to his party for the first time since 2014.

Now with control of the House, Senate, and White House, the Democratic Party’s agenda is rapidly manifesting.

On Joe Biden’s first day in office, the Department of Homeland Security instructed ICE officers in Texas to freeze all deportations. “This includes Mexican bus runs, charter flights and commercial removals (until further notice) . . . all cases are to be considered [no significant likelihood of removal in foreseeable future],” reads a memorandum obtained by Fox News. “Release them all, immediately. No sponsor available is not acceptable any longer.”

Before Trump had even left the White House, Biden’s landing teams at the Department of Justice and DHS consisted of formidable legal minds, coming to scrap what little the previous administration had accomplished on immigration. Whereas Biden chose Alejandro Mayorkas—one of the nation’s top liberal immigration lawyers—to head DHS, Trump chose the subversive Kirstjen Nielsen first, followed by Chad Wolf, a former immigration lobbyist. Trump allowed the two to undermine him for four years; Wolf even defied a direct order from Trump with impunity, something unimaginable under a Democratic president.

But every mistake, every misfire, every hesitation was written off in order to bouy the delusion that a second term in which Trump would finally begin to govern was guaranteed. Democrats, on the other hand, are governing like there is no tomorrow. And they are going to make their enemies feel the pain.

The lesson the Right must learn now—or it never will—is that power cannot be eschewed but must instead be used. The Right must learn to use the sword of the state responsibly. As the Left does, the Right must believe that it can use power to build a better world, and it must develop the vision to do so. It must leave the historically irrelevant and defeated conservative movement behind and peel away the GOP’s blindfold so that it may see clearly both its enemies and what it must do.