The Subtlest Form of Protest 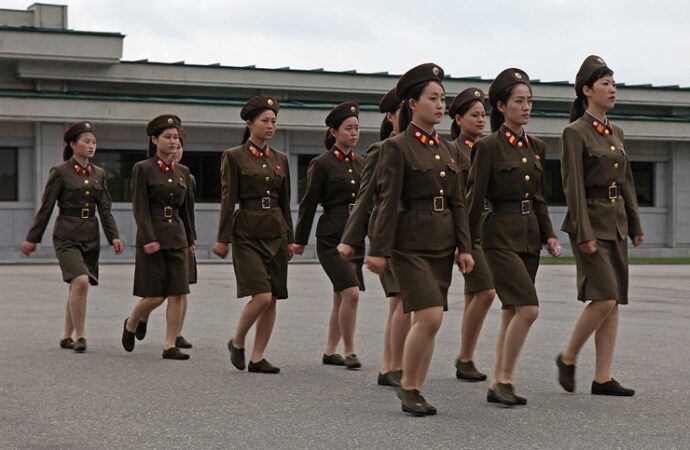 There is a lot of discussion of late regarding various methods for protesting against government-mandated COVID-19 lockdowns or the results of the 2020 presidential election. Everything from singing in grocery stores to concentrated letter-writing campaigns has been suggested here at Intellectual Takeout.

Such brazen displays are allowed in the U.S. because it still has some degree of respect for freedom of speech and expression, even during the pandemic. In North Korea, however, dissidents tend to be more subtle, such as wearing the wrong shade of lipstick.

“Whenever I put on makeup, older people in the village would say that I’m a rascal smeared with capitalism,” North Korean defector and aspiring actress Nara Kang told CNN. “There was a patrol unit every ten meters to crackdown on pedestrians for their looks.”

In recent years it has often been predicted that Vice President Mike Pence would turn the U.S. into the post-apocalyptic hellscape of Margaret Atwood’s The Handmaid’s Tale. Nothing approaching such a scenario ever came to pass during the four years of the Trump-Pence administration.

But interviews with defectors show that the North Korean regime maintains a literal fashion police much more akin to Atwood’s feared dystopia. Tight jeans, miniskirts, shirts with English-language words, and anything else deemed too Western can see their wearers subjected to “small fines, public humiliation or punishment,” the latter of which has been known to include hard labor, according to CNN.

The dystopian oppression of women is all too common in collectivist countries such as North Korea. Human Rights Watch notes:

“Women in North Korea suffer widespread gender-based abuses in addition to the abuses suffered by the population in general. In detention facilities, security personnel have subjected women to rape and other sexual violence. Human traffickers and brokers, often linked to government actors, subject women to sexual exploitation and sexual slavery in China, including through forced marriage. Women face high levels of discrimination and sexual harassment and assault in the workplace, and constant exposure to government-endorsed stereotyped gender roles. State authorities engage in abuses against women and systematically fail to offer protection or justice to women and girls experiencing abuses.”

Any pregnant North Korean woman who attempts to escape Pyongyang’s control are subjected to forced abortions by violent prison guards. Babies born alive to these women are exposed to the elements and left to die. Sexual violence has been “normalized” in North Korea, and one woman told The Independent that “Like all North Korean women, I had no rights.”

So rather than the Greco-Roman, Judeo-Christian Republic of the United States of America under Mike Pence, it is the Communist, Juche, cult-of-personality North Korea under the Kim family that engages in horrendous abuses of women.

Yet, somehow, we hear very little condemnation of this collectivist ideology or the various other names it treads under, such as Socialism and Communism. Neither the mainstream media nor hordes of protestors call attention to the evils of these ideologies. Indeed, the rioters of Antifa would like nothing more than for the United States’ economic and political systems to shift further into collectivist government control and out of the hands of free-acting individuals.

Even the CNN article profiling Kang and her fellow defectors and dissidents cannot bring itself to condemn Communism. Some of the horrors and indignities of the Kim regime are detailed, but not once will you find the words “Communism,” “Socialism,” or “Juche” mentioned. The term “regime” is used a few times, but the nature of the regime is not made clear. Some misguided college student might well assume that North Korea is in fact some sort of right-wing regime led by Donald Trump’s buddies.

But it is not. It is a collectivist state under the heel of Kim Jong-un. Every aspect of the lives of ordinary North Koreans rests with the state, from their hairstyles, cosmetic choices, clothing options, to where they can go, to what—and if—they can eat. In turn, every aspect of the government is controlled by Kim Jung-un.

Those of us in Western republics have had it good for so long that we have lost our ability to contextualize our grievances. Every boogeyman in our domestic political opposition is a Hitler or a Stalin. Never mind how preposterous that is in reference to the historical record; it is equally untrue in our modern context in which living despots lord over their subjects with complete control.

Mike Pence is not and never was the villain of some dystopian novel, but Kim Jung-un visits all the horrors of The Handmaid’s Tale and more upon his people. To him, the term “my people” is not an endearing term. “My” is used only in the possessive form.