Cancel Culture and the Golden Age of Musical Theater 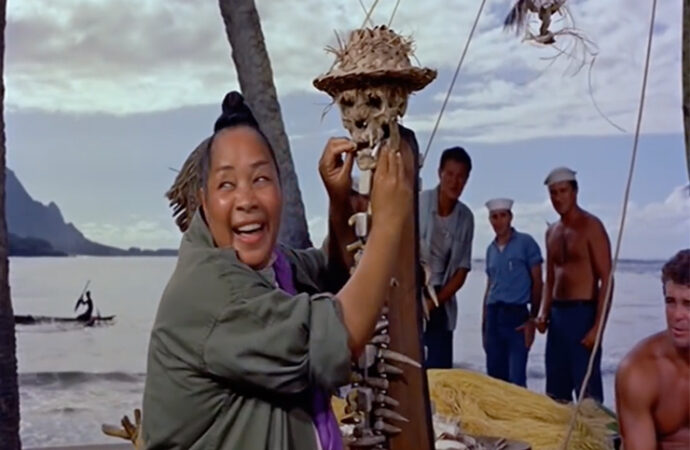 My mom loved listening to Broadway musicals and particularly favored South Pacific. By the time I left for college, she had played that record so often I had memorized most of the songs and can still belt them out. I also saw the movie with her—I’m generally not a fan of musicals on film, and this one was no exception—but the music, as the old saying goes, “was to die for.”

With cancel culture shredding our culture, that expression might take on a whole new meaning. Sing some of the songs from this tale of U.S. sailors fighting the Japanese in the Pacific, and you might find your reputation hanging from the nearest oak tree.

Let’s start with the score’s most egregious offense in today’s politically poisoned climate: its treatment of women. Back in 1949, when the musical first appeared, euphemisms for women like “dolls,” “dames,” and “broads” were as common as saddle shoes and bouffant hairdos. Oscar Hammerstein, lyricist for South Pacific, opens the song “Honey Bun” with these words:

My doll is as dainty as a sparrow,

Her figure is something to applaud,

And she’s broad where a broad should be broad.

When sung, those “broads” come as “baaaa-rod. Sing it that way today, and the misandrists will be after you with stilettos—and I don’t mean high heels.

Nothin’ else is built the same,

Nothin’ in the world

As the soft and wavy frame

When Nellie Forbush, a young Navy nurse, falls in love with Emile de Becque, a Frenchman running a plantation on the island, she sings lines like these in “A Wonderful Guy:”

I’m as corny as Kansas in August,

I’m as normal as blueberry pie.

No more a smart little girl with no heart,

I have found me a wonderful guy.

“A smart little girl with no heart?” Critical theorists would jump on that one like a lioness on a lamb.

Critical race theorists could also throw bricks at the play and the movie because of Bloody Mary, a native of the islands who, though shown as a wise woman, sells trinkets, including shrunken human heads, to the sailors. She would doubtless be deemed a symbol of racial inferiority and oppression, especially when the sailors affectionately sing of her, “Bloody Mary is the girl I love,” “Her skin is tender as DiMaggio’s glove,” and “She is always chewing betel nuts.”

A clear case of racist stereotyping.

Ironically, a central message of South Pacific is racial tolerance. The bitter sentiments sung by a Naval lieutenant who has fallen in love with a native woman roused controversy and criticism:

You’ve got to be taught

Of people whose eyes are oddly made

And people whose skin is a different shade,

You’ve got to be carefully taught

Other musicals from the “Golden Age of Musical Theater” also violate today’s politically correct standards. Porgy and Bess? Not a prayer for a revival for that one. The King and I? Cultural appropriation. Guys and Dolls and Gentlemen Prefer Blondes? The titles alone would shoot down these productions.

The critical theorists who dominate so many of the humanities departments in our universities are behind the cancel culture movement, teaching students a new Trinity: recognition of oppression, protest against that oppression, and liberation.

Which means wiping out our past.

This erasure of culture is not unique to the United States. It has already occurred in Communist China and in other Communist states and is well underway in Western Europe. Customs, traditions, the arts, history itself: all are under steady assault. As in those places, radicals and their weak-kneed accomplices are putting the butcher’s blade to our American culture and history.

What will be the outcome if we allow this butchery?

In “The crusade to erase history,” columnist Christine Flowers cites this passage from George Orwell’s 1984:

Every record has been destroyed or falsified, every book rewritten, every picture has been repainted, every statue and street building has been renamed, every date has been altered. And the process is continuing day by day and minute by minute. History has stopped. Nothing exists except an endless present in which the Party is always right.

Flowers then writes, “I will not say the appropriate things. I will not apologize for a guilt I do not bear. I will not engage in pithy, socially woke slogans. I will not grovel, bend the knee or worry that my words might get me ostracized, unemployed or even killed.”

Her words should serve as banners and bugles to the rest of us.

As for me at this moment, it’s time to clean the house and listen to South Pacific.