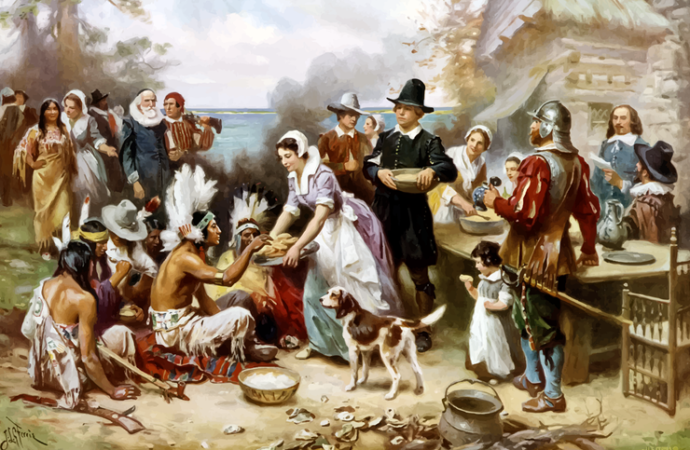 We seem to hear little this year about the arrival of the Pilgrims in Massachusetts in November 1620.
Perhaps the coronavirus is the cause, or maybe the ugly mess and turmoil of our presidential election has overshadowed its remembrance. Or maybe political correctness has claimed another victim.
Whatever the case, the 400th anniversary of their arrival is an important milestone. True, the Pilgrims didn’t celebrate the first Thanksgiving until the following autumn, when they were blessed by bountiful crops and game, but surely we should celebrate this 400th anniversary with raised glasses and public ceremonies.
Let us first pay homage to the Pilgrims for the Mayflower Compact. Blown far off course—they were supposed to sail to the Virginia colony, which was under English law and charter—and worried about divisions among the colonists on board the Mayflower, before setting foot on land 41 members of that company signed a covenant laying out general ground rules for law, order, and governance. They understood that if they were to survive, they must for the time being regulate themselves.
Only two paragraphs long, the Compact asserts that the signers:

[C]ovenant and combine ourselves into a civil body politic; for our better ordering, and preservation and furtherance aforesaid; and by virtue hereof to enact, constitute, and frame, such just and equal laws, ordinances, acts, constitutions, and offices, from time to time, as shall be thought most meet and convenient for the general good of the colony; unto which we promise all due submission and obedience.

In his article in the September issue of Chronicles—“The 1620 Project”—Professor Mark David Hall relates, “The Compact is significant because it represents the commitment many Reformed leaders had to the idea that people must consent to civic and ecclesiastical institutions if they are to be legitimate.” He continues by noting, “The Pilgrims, and the Puritans who followed them, created civil governments that are among the most republican the world has ever seen.”
Given our present tribulations of the coronavirus and a contested election, we might also pause to remember and honor the grit of these hardy Pilgrims in our Thanksgiving celebrations. In their first winter in the New World, 45 of the 102 settlers died from various causes, sometimes two or three in a single day. Under the leadership of men like Myles Standish and William Bradford, the colony survived that horrid ordeal. That winter of suffering and death brings some sense of proportion to our current arduous circumstances.
What some might see as a miracle also occurred in that faraway time. In the spring of 1621, the Indian Samoset, who had learned a little English from fishermen, presented himself to the colonists, sent by his chieftain Massasoit of the Wampanoag Confederation to seek a possible alliance with them against another hostile tribe. As Peter W. Wood tells us in his book 1620: A Critical Response to the 1619 Project, “on March 22, Samoset introduced the Plymouth colonists to another Indian, Tisquantum (also known as Squanto), who spoke fluent English, having been enslaved once by an Englishman and having spent several years in England.”
That spring, Squanto and other Indians taught the colonists how to grow corn, where to hunt and fish, and how to take advantage of the new land in which they found themselves. In exchange, for 25 years the Plymouth colony remained an ally of the Wampanoag.
In addition to their contribution to our political liberties, the Pilgrims and later the Puritans also helped define our religious freedoms. Unlike their English counterparts in Virginia, the Pilgrims came to America not only for commercial gain but to escape the strictures of the established church in England. They wanted no part of a national church—which is why they earned the name “Separatists”—and were seeking a place where they could worship as they pleased. In 1630, before he and his followers sailed for America, Puritan John Winthrop urged them to found a community that would become as “a city upon a hill, the eyes of all people are upon us,” meaning they should live righteous lives.
In the next century, the descendants of such stalwarts would help lead America in its fight for liberty.
At the end of his Chronicles piece, Mark Hall writes of the Pilgrims and Puritans,

They created political institutions that were among the most republican that the world had ever seen, and they strictly limited civic leaders by law. They valued liberty and had, as David D. Hall put it in A Reforming People, an “animus against ‘tyranny’ and ‘arbitrary’ power that pervaded virtually every sermon and political statement.”

When we celebrate Thanksgiving this year, even with its coronavirus lockdowns and political strife, we should recollect with gratitude these men and women, and so many others, who believed in the inalienable rights of all human beings, who recognized life, liberty, and the pursuit of happiness as gifts given by a power higher than a government. We might also take a lesson from these predecessors in their detestation of tyrants and dictatorial laws.
It’s the American Way.
—