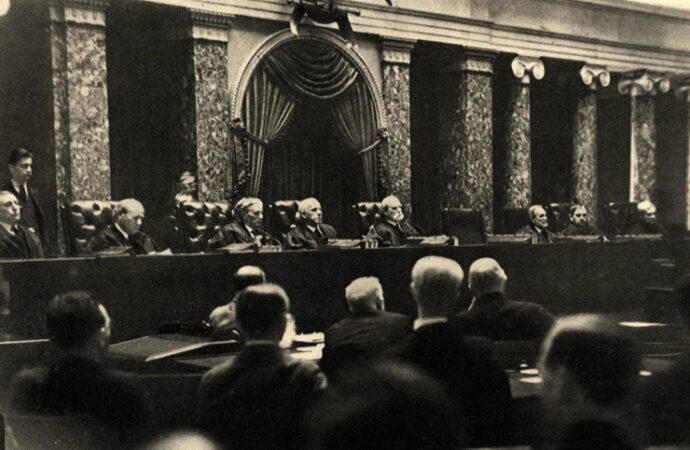 The Supreme Court has risen to the forefront of the November election. And, unfortunately, it may be no exaggeration to say that the future of the judiciary itself is at stake.

Senate Republicans look set to confirm Judge Amy Coney Barrett, a qualified conservative jurist, to fill the seat left vacant by the late liberal stalwart Ruth Bader Ginsburg. Barrett’s confirmation will tilt the balance of the Supreme Court to a 6-3 conservative majority. Many progressives are outraged by what this prospect means for their political priorities. They’re also angered by the GOP’s perceived hypocrisy, given that Republicans previously blocked former President Obama’s Supreme Court nominee during an election year.

In their furious response, several top congressional Democrats have openly called for “packing the court.” They want to rewrite the rules to expand the number of justices on the Supreme Court – so they can add more like-minded judges and skew its balance.

Mitch McConnell set the precedent. No Supreme Court vacancies filled in an election year. If he violates it, when Democrats control the Senate in the next Congress, we must abolish the filibuster and expand the Supreme Court.

If Sen. McConnell and @SenateGOP were to force through a nominee during the lame duck session—before a new Senate and President can take office—then the incoming Senate should immediately move to expand the Supreme Court. 1/2 https://t.co/BDYQ0KVmJe

It’s unclear whether the Democrats’ newfound support for court packing has reached the top of their ticket. Both presidential nominee Joe Biden and his running mate Kamala Harris have dodged on whether they would pack the Supreme Court with liberal judges. Most recently, Biden said, “I’m not a fan of court packing, but I don’t want to get off on that whole issue.” The presidential candidate has even said that voters “don’t deserve” to know his position and can find out “the day after the election.”

What Would Court Packing Mean?

Unfortunately, the number of justices on the Supreme Court is not set in the Constitution itself. So, Congress could pass a law expanding the number of judges on the court and a president could sign it into law without technically violating the Constitution. This would then give that same president and Congress, presumably of the same party, the opportunity to add judges they know agree with them and will uphold their agenda.

While doing so would technically be within the letter of the Constitution, the number of justices has remained at nine since 1869. Changing this would be a shredding of norms and rewriting of the rules for political gain. It would have grave consequences.

Packing the Supreme Court would likely set off a cycle where each party expands the court whenever it takes power. (Democrats add two justices, then Republicans add two, and so on.) This would almost certainly result in a Supreme Court expanded to the size of irrelevance that loses legitimacy and is thus unable to check the power of the other branches.

Packing the court would be a greater blow to norms, legitimacy, and our system of government than *anything* Trump has said or done

“If the Democrats pack the court, the GOP will respond in kind, as soon as they get the chance,” George Mason University law professor Ilya Somin has written. “The predictable result will not only be a loss of ‘credibility’ for the Supreme Court, but also the elimination of judicial review as an effective check on the other branches of government.”

This brings us to the grave danger posed by court packing: It would erode the separation of powers that prevents government officials (of either party) from violating our rights. It subverts the highest level of the judicial branch to the whims of the executive and legislative branches. It removes a crucial check on the other branches and leaves the Supreme Court as little more than a red-stamp for the president’s agenda, no matter how authoritarian it may be.

The Founding Fathers purposefully enshrined the separation of powers into our system of governance. They knew that if one branch or official wields too much power, nothing prevents the slow slide into tyranny. In reaching this conclusion, the founders were heavily influenced by the work of French philosopher Charles-Louis de Secondat, known as Montesquieu.

“There can be no liberty where the legislative and executive powers are united in the same person,” Montesquieu theorized. “Were the power of judging joined with the legislative, the life and liberty of the subject would be exposed to arbitrary power, for the judge would then be the legislator. Were it joined to the executive power, the judge might behave with all the violence of an oppressor.”

To get a grasp of the importance of this concept, just think of a basic courtroom scenario. If one person got to be both prosecutor, judge, and jury, would we expect fair outcomes? Just imagine if a prosecutor who lost a case could simply add two judges when a judge ruled against her, then try again and have the conviction upheld 2 to 1.

How Checks and Balances Preserve the Separation of Powers

It’s easy to see why the separation of powers is so important. But we can only preserve it through a system of “checks and balances,” where each branch of government can restrain the other branches when they overstep the bounds of their authority.

“In framing a government which is to be administered by men over men, the great difficulty lies in this: you must first enable the government to control the governed; and in the next place oblige it to control itself,” James Madison wrote in Federalist 51. “The great security against a gradual concentration of the several powers in the same department, consists in giving to those who administer each department the necessary constitutional means and personal motives to resist encroachments of the others.”

The greatest check against Congress abusing its power is that the president can veto legislation that goes too far. Conversely, Congress can impeach a president who abuses his power. Meanwhile, both are kept in check by the judicial branch, which ensures laws are properly followed. The judiciary is, in turn, checked by Congress’s ability to impeach judges who abuse their power and define judicial jurisdictions.

These checks and balances are how we preserve the separation of powers that keeps us free from government oppression and violations of our rights.

Why Court Packing Undermines the Checks and Balances

As Somin explained, packing the Supreme Court removes it as a meaningful check on the other branches.

“If the president can pack the court any time his or her party controls both houses of Congress, they can prevent the court from making decisions that curb unconstitutional policies they may wish to enact,” the law professor wrote. “It is no accident that court-packing is a standard tool of authoritarian populists seeking to undermine liberal democracy, recently used in such countries as Hungary, Turkey, and Venezuela.”

Imagine a hypothetical scenario where Joe Biden is elected president and Democrats win the Senate. They pass a sweeping gun confiscation law and are about to go door-to-door seizing semi-automatic weapons from law-abiding Americans. But, the Supreme Court rules that the legislation is unconstitutional and violates the Second Amendment. Instead of rewriting their legislation so it complies with the Constitution or pursuing another means to promote public safety, Biden and the Democrats simply pack the Supreme Court with more liberal judges who then uphold the law so they can move forward.

Or, for liberals, consider an alternative scenario.

President Trump enacted immigration restrictions at the start of his presidency that limited immigration from several Muslim-majority countries. Yet the first two versions of Trump’s “ban” were hamstrung by legal challenges. He had to change the executive order and pursue much more modest restrictions before finally having his move upheld by the Supreme Court. This was an example of checks and balances in action – but it all could have been circumvented if Trump had instead responded by teaming up with Senate Republicans to pack the court. (Thankfully, he didn’t.)

No matter your politics, it’s easy for any honest observer to see how the system of checks and balances would be irreparably undermined and destroyed by a packing of the Supreme Court in pursuit of partisan, political ends.

Opposing Court Packing Should Not Be a Left vs. Right Issue

Even if you share Joe Biden’s political or policy goals, you should still oppose court packing as a matter of principle. In fact, no less a liberal icon than Bader-Ginsburg herself vocally opposed expanding the court.

It’s easy to see why. If Democrats can simply expand the court to circumvent the judiciary and do whatever they want, so can Republicans the next time they are in charge or vice versa. Then it will be your political values and liberties under attack by an unchecked executive.

Fundamentally, opposition to packing the Supreme Court should not be a Left vs. Right partisan issue. If this dangerous flirtation were followed through on, it would forever undermine the separation of powers that protects all Americans’ liberty.

The sky-high political tensions of our current moment are understandable. But we must not respond to them by breaking the system of government that keeps America free.