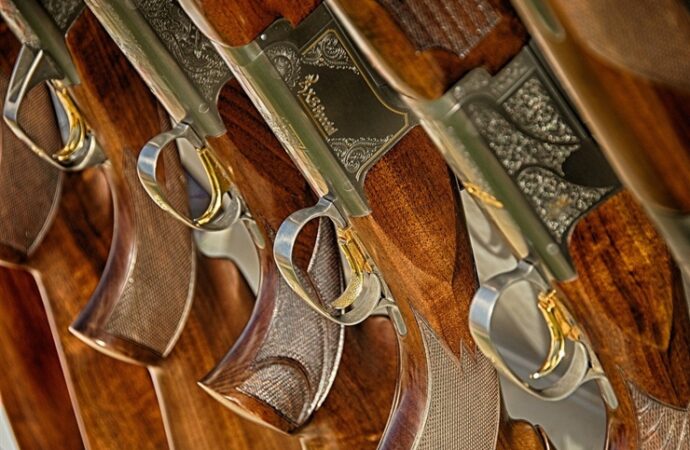 My local gun dealer’s website has a huge banner in the middle of the homepage that says, LIMITED INVENTORY—CALL AHEAD. So, a few weeks ago, that’s what I did.

Back in March, fear that COVID-19 would bring down the American economy drove firearms sales through the roof. Our citizens (quite sensibly) wanted to be sure that, should the United States devolve into a Mad Max-style warlord state, we could defend our canned beans and toilet paper – with lethal force, if necessary. Riots following the death of George Floyd in May further drained the supply of pistols and rifles commonly used for self-defense.

Now, the 2020 election is just one week away, and most polls are predicting a comfortable Biden victory. The former vice president has promised to confiscate “assault weapons,” which is a scary-sounding name Democrats give to automatic and semiautomatic guns. That includes every rifle that fires more quickly than a blunderbuss and every pistol more advanced than a flintlock. Since most Americans don’t fancy the idea of defending their homes with muskets, stockpiling continues to intensify.

One would assume that industry giants are on cloud nine, but not everyone is pleased. Soaring demand has created an incredibly unstable market, and gun-makers have no idea how to respond. A similar boom in demand during the 2016 cycle led to an immediate bust after Election Day. Then, too, conservatives feared a President Hillary Clinton would enact new restrictions on firearm ownership. Those industry giants hired a wash of new workers to meet demand but, when Donald Trump (rather unexpectedly) won the day, those companies were forced affect major layoffs as their stock values dropped precipitously.

So, maybe it’s not surprising that Winchester and Glock are wary of ramping up production. Yet this shortage has been worsening for the better part of a year, and most pollsters predict a blowout for the Democrats. If the Blue Wave does hit on November 3rd, gun sales are only likely to increase. So, does Sig Sauer know something we don’t? Is there some internal poll circulating the offices of Big Gun that shows the President winning handily?

Alas, probably not. Alan Rice, a spokesman for Gun Owners of America, tells me that firearms sales have surged before every election dating back to at least 1988. True: the bump in 2016 election was extraordinary, even by election-year standards. Yet demand for guns has been growing steadily over past decades, and manufacturers were already struggling to keep up their supply in 2019.

I also spoke about the deficit with Mark Olivia, public affairs director for the National Shooting Sports Foundation, the largest trade associations for firearms manufacturers in the country. “They’re working hard to keep up with this demand,” Mr. Olivia assures us. “They’re adding third shifts. And you need lead time to order raw materials. Even if we returned to pre-COVID demand tomorrow, it would take six months to back stock inventory.” Mr. Rice agrees. “I’ve been told that manufacturers are running at capacity, but raw materials are becoming difficult to source.”

As it happens, some friends and I were out hunting last weekend when we drove past the Ruger factory in Newport, New Hampshire. I counted six huge banners along the road that said, “We’re hiring!” According to Glassdoor, that factory pays between $45,000 and $75,000 per annum. The Ruger website also lists competitive benefits, including life insurance and prescription drug coverage. That’s nothing to spit at, especially here in the Granite State. Like virtually every company in America, they’re probably having difficulty finding workers who are willing to show up on time and work hard.

Still, demand is going to keep growing. Right now, America is living through the largest buyup of firearms in known history. So far this year, the FBI has conducted over 15.4 million background checks on citizens looking to buy a new gun. That means the American people are purchasing between 1.6 and 2.2 million guns every month. For perspective, there were 15.7 million background checks in all of 2016. “I’d bet my paycheck that we’re going to blow through that 2016 record,” says Mr. Olivia. No doubt.

I asked Mr. Olivia what’s causing the surge in demand; he points to the civil unrest sparked by the death of George Floyd. “People became very concerned with their safety,” he points out. “Police were saying they weren’t going to respond to every 9-1-1 call because they don’t have the manpower.”

Mr. Rice feels the same way. His organization, the Gun Owners of America – a smaller, more hardline version of the NRA – is seeing an explosion in membership. “We’ve seen the COVID pandemic cause police departments to say that responses to calls for service will be limited. The riots in many cities have spurred many people who have never owned a firearm to purchase one. People are fearful, they are buying more guns and more ammunition for self-defense.” The Biden campaign certainly isn’t helping. “We have never seen a presidential candidate stand on the debate stage and threaten to confiscate weapons,” says Mr. Oliva. “They’re not just coming after your individual rights. They’re coming after the industry.”

“I’ve been good for gun manufacturers,” President Obama joked in 2016. His attempts to heavily restrict the ownership of firearms did indeed cause a surge in sales, as did Bill Clinton’s in 1994.

But for gun owners, the the prospect of a Biden presidency is no laughing matter. Gun Owners of America takes note of Mr. Biden’s promise to confiscate so-called assault weapons – though they don’t think it will be quite as easy as it sounds. “It’s doubtful that the people who are buying all these guns, magazines and ammunition are going to willingly surrender them to a Biden gun confiscation department run by Robert Frances ‘Beto’ O’Rourke,” Mr. Rice notes.

For many in the firearms industry, the Biden campaign’s rhetoric is personal. “They called us the enemy,” Mr. Rice says. “Look, I spent 25 years in the Marines. I served active duty in the Middle East. And Joe Biden called me the enemy. Our industry is full of veterans, and he called us the enemy. We take him at his word.” The Left might dismiss such talk as civil-warmongering, yet the fact remains that Americans love guns. In fact, there are more privately-owned firearms in this country than there are private citizens. Those firearms are distributed among 40 percent of American households, and that percentage is growing rapidly. On this issue, at least, Mr. Biden is badly out of step with American voters. According to Gallup, 56 percent of us want gun-ownership rights to be relaxed or stay the same. That number, too, is growing.

Admiral Yamamoto once said, “You cannot invade mainland United States. There would be a rifle behind each blade of grass.” He was right. From Virginia’s yeoman farmers to the cowboys of Arizona, Americans have always prized self-reliance above all other virtues, and self-defense is integral to self-reliance. Events of the last few months seem to be reawakening that spirit of “rugged individualism” in the hearts of our countrymen.

Not a moment too soon, either. Guns make America great, and America makes great guns. We just can’t get enough of them.