Why U.S. Wildfires Hit California More Than the Southeast 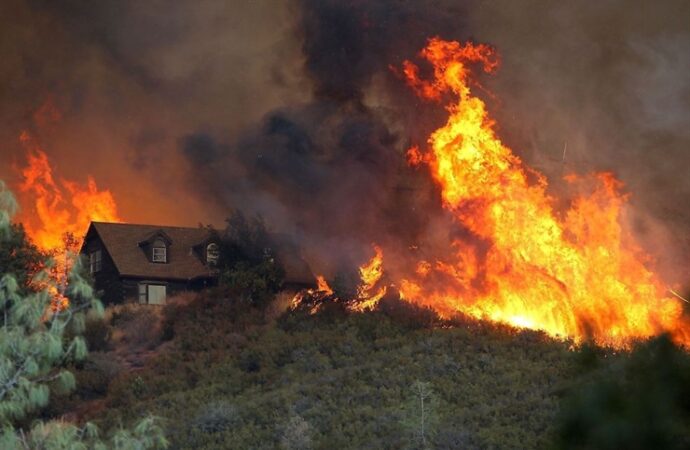 California wildfires continue to blaze in one of the worst fire seasons in recent memory. While California fires are nothing new, government data show the damage has been substantial.

The California Department of Forestry and Fire Protection says that since August 15, when California’s fire activity accelerated, there have been at least 24 fatalities and more than 4,200 structures destroyed. (Ten people have also died in Oregon, CNN reports.) So far in 2020, California wildfires have burned more than 3.2 million acres of land – an area roughly the size of Connecticut.

As the fires rage, politicians argue over what (and who) is to blame.

These answers are not mutually exclusive, of course, and evidence suggests that both poor land management and California’s high temperatures and arid climate have played a role.

While addressing California’s extreme temperatures is difficult, especially in the short term (unless you’re a member of the X-Men named Storm), evidence suggests immediate solutions are available to improve state and federal forestry management.

Citing the fires scorching the West, The New York Times last week ran an article that stated it was time for government agencies to rethink their fire management policies.

“For over a century, firefighting agencies have focused on extinguishing fires whenever they occur. That strategy has often proved counterproductive,” the Times reports. “Many landscapes evolved to burn periodically, and when fires are suppressed, vegetation builds up thickly in forests. So when fires do break out, they tend to be far more severe and destructive.”

This was precisely what economist Jairaj Devadiga pointed out in a 2018 FEE article that examined why California’s wildfires historically have been much worse than those of Baja California, where fires are allowed to burn naturally at low intensity, regularly clearing out forest floors and limiting the spread of large conflagrations.

Though the Times doesn’t mention Baja California, the paper does endorse the Mexican state’s strategy of allowing fires to burn naturally to eliminate vegetation, pointing out that experts attribute the tactic to the more successful fire prevention approach found in the Southeastern United States.

Scientists who study wildfires agree that allowing forests and grasslands to burn periodically — by, say, intentionally setting smaller fires under controlled conditions — can be a more effective way to clear out vegetation. In Ponderosa pine forests, for instance, low-level fire can nurture ecosystems and help prevent destructive large-scale fires from breaking out.

This already occurs in the Southeastern United States, where officials use prescribed fires to burn millions of acres each year. While the region still sees destructive blazes — like Tennessee’s drought-fueled Great Smoky Mountains fires in 2016, which killed at least 14 people — experts credit the use of controlled burns with sparing many Southeastern communities from fire damage.

Contrary to Western states, “fire is widely accepted as a tool for land management in the Southeast,” fire scientist Crystal Kolden told the Times. This is in stark contrast to California, where just 50,000 acres were intentionally burned in 2017. (As a point of reference, academics estimate between 4.4 million and 11.8 million acres of forest burned annually in prehistoric California.)

Fortunately, it appears that political leaders are beginning to recognize the problem. In August,

While this is a step in the right direction, federal regulations could prove an obstacle to the strategy.

As Sam Rutzick at Reason point outs, the Clean Air Act of 1990 treats the smoke from a controlled burn as a pollutant (in contrast to a wildfire allowed to burn) and the National Environmental Policy Act requires “a couple-thousand-page document analyzing every single conceivable impact to the environment that the (burn) plan might have.”

The wildfires are a reminder of an unpleasant reality: governments are poor stewards of the environment.

Unlike private landowners, they have little incentive to be prudent long-term stewards of the land, which is why, Fretwell points out, “almost one-third of the acreage managed by the Forest Service is at high risk of catastrophic wildfire.”

The truth is federal agencies are much better at enforcing regulations than providing meaningful land stewardship. This is one of inherent problems when lands are owned collectively. As FEE’s Webb Beard has observed, echoing Aristotle, when something is owned by everyone, it is effectively owned by no one. The incentive to maintain or improve it is removed because these decision-makers do not benefit from prudent stewardship, and often do benefit from imprudent exploitation, neglect, and virtue-signaling but counterproductive “protection.”

This is why many economists see property rights as a solution to federal land mismanagement. When individuals own something, they have incentive to maintain it and protect it effectively, evidenced by the strong record of private property owners who have turned around threatened ecosystems.

If you’re wondering why you rarely hear of wildfires ravaging Texas, consider this fact: 95 percent of Texas’ land mass is privately owned.

‘A Cultural Shift’ in Thinking

As the Times points out, effectively managing wildfires will require “a cultural shift” in thinking.

This means finally accepting the efficacy of prescribed burning, but it also means decentralizing the process and allowing more private ownership and more localized stewardship over these lands.

As Dr. Kolden points out, indigenous populations have a long track record of using fire effectively to manage forested areas.

“We should be empowering the people who know how to do this,” Kolden told the Times.

This is no small matter. It’s not exactly the hallmark of government agencies and bureaucrats to acknowledge that others might have more local knowledge and expertise to solve a problem than they do.

There’s also the matter of addressing federal regulations that make it difficult for state agencies to use controlled burning as a tool (though simply eliminating policies that call for automatically extinguishing natural blazes is a step in the right direction).

It should also be acknowledged that no solution will immediately solve California’s wildfire problem. The journal Nature Sustainability published a report in February stating the Golden State would have to burn 20 million acres of forested land to restore forest health. You don’t solve a century’s worth of mismanagement overnight.

The good news is, as Elizabeth Weil noted in a recent ProPublica article, “we know how to prevent megafires.” The solution is ending aggressive fire suppression and empowering individuals who understand land management.

Lenya Quinn-Davidson, a fire adviser for the University of California Cooperative Extension and director of the Northern California Prescribed Fire Council, said this means embracing the hands-off fire prevention culture of the Southeast.

“Your average person goes out back with Grandpa, and they burn 10 acres on the back 40 you know, on a Sunday,” Quinn-Davidson told Weil.

In other words, it means relinquishing control, which is something politicians and bureaucrats have a hard time doing, especially in the Golden State.

That may be the biggest hurdle for preventing disastrous wildfires in California.