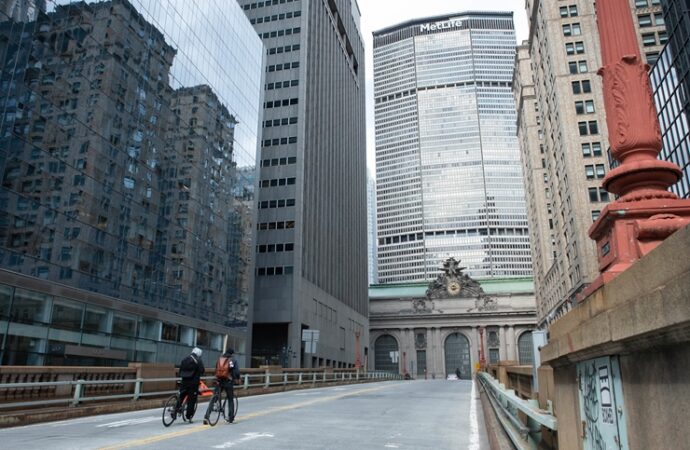 The separateness in New York, and by extension much of the nation curled around it from America’s eastern edge, stands out. There are the hyper-wealthy and there are the multi-generational poor. They depend on each other, but with COVID who needs who more has changed.

It’s easy to stress how far apart the rich and the poor live, even though the mansions of the Upper West Side are less than a mile from the crack dealers uptown. The rich don’t ride public transportation, they don’t send their kids to public schools, they shop and dine in very different places with private security to ensure everything stays far enough apart to keep it all together.

But that misses the dependencies which until now have simply been a given in the ecosystem. The traditional view has been the rich need the poor to exploit as cheap labor – textbook economic inequality. But with COVID as the spark, the ticking bomb of economic inequality may soon go off in America’s greatest city. Things are changing and New York, and by extension America, needs to ask itself what it wants to be when it grows up.

Now for how the other half lives. Below those wealthy people in every sense of the word the city has the largest homeless population of any American metropolis, which includes 114,000 children. The number of New Yorkers living below the poverty line is larger than the population of Philadelphia, and would be the country’s seventh largest city. More than 400,000 New Yorkers reside in public housing. Another 235,000 receive rent assistance.

That all costs a lot of money. The New York City Housing Authority needs $24 billion over the next decade just for vital repairs. That’s on top of a yearly standard operating cost approaching $4 billion. A lot of the money used to come from Washington before a multibillion-dollar decline in federal Section 9 funds. So today there is a shortfall and repairs, including lead removal, are being put off. NYC also has a $34 billion budget for public schools, many of which function as distribution points for child food aid, medical care, day care, and a range of social services.

The budget for a city as complex as New York is a mess of federal, state, and local funding sources. It can be sliced and diced many ways, but the one that matters is the starkest: the people and companies who pay for New York’s poor are leaving even as the city is already facing a $7.4 billion tax revenue hit from the initial effects of the coronavirus. The money is there; New York’s wealthiest individuals have increased their net worth by $44.9 billion during the pandemic. It’s just not here.

New York’s Governor Andrew Cuomo has seen a bit of the iceberg in the distance. He recently took to MSNBC to beg the city’s wealthy, who fled the coronavirus outbreak, to return. Cuomo said he was extremely worried about New York City if too many of the well-heeled taxpayers who fled COVID decide there is no need to move back. “They are in their Hamptons homes, or Hudson Valley or Connecticut. I talk to them literally every day. I say. ‘When are you coming back? I’ll buy you a drink. I’ll cook. But they’re not coming back right now. And you know what else they’re thinking, if I stay there, they pay a lower income tax because they don’t pay the New York City surcharge. So, that would be a bad place if we had to go there.”

Included in the surcharge are not only NYC’s notoriously high taxes. The recent repeal of the federal allowance for state and local tax deductions (SALT) costs New York’s high earners some $15 billion in additional federal taxes annually.

“They don’t want to come back to the city,” Partnership for NYC President Kathryn Wylde warned. “It’s hard to move a company… but it’s much easier for individuals to move,” she said, noting that most offices plan to allow remote work indefinitely. “It’s a big concern that we’re going to lose more of our tax base then we’ve already lost.”

While overall only five percent of residents left as of May, in the city’s very wealthiest blocks residential population decreased by 40 percent or more. The higher-earning a neighborhood is, the more likely it is to have emptied out. Even the amount of trash collected in wealthy neighborhoods has dropped, a tell-tale sign no one is home. A real estate agent told me she estimates about a third of the apartments even in my mid-range 300 unit building are empty. The ones for sale or rent attract few customers. She says it’s worse than post-9/11 because at least then the mood was “How do we get NYC back on its feet?” instead of now, when we just stand over the body and tsk tsk through our masks.

Enough New Yorkers are running toward the exits that it has shaken up the greater area’s housing market. Another real estate agent describes the frantic bidding in the nearby New Jersey suburbs as a “blood sport.” “We are seeing 20 offers on houses. We are seeing things going 30 percent over the asking price. It’s kind of insane.”

Fewer than one-tenth of Manhattan office workers came back to the workplace a month after New York gave businesses the green light to return to the buildings they ran from in March. Having had several months to notice what not paying Manhattan office rents might do for their bottom line, large companies are leaving. Conde Nast, the publishing company and majority client in the signature new World Trade Center, is moving out. Even the iconic paper The Daily News (which published the famous headline “Ford to City: Drop Dead” when New York collapsed in 1975 without a federal bailout) closed its physical newsroom to go virtual. Despite the folksy image of New York as a paradise of Mom and Pop restaurants and quaint shops, about 50 percent of those who pay most of the taxes work for large firms.

Progressive pin-up Mayor De Blasio has lost touch with his city. After years of failing to address economic inequality by simply throwing free money to the poor and limiting the ability of the police to protect them, and us, from rising crime, his COVID focus has been on shutting down schools and converting 139 luxury hotels to filthy homeless shelters. Alongside AOC, he has called for higher taxes on fewer people and demanded more federal funds. As for the wealthy who have paid for his failed social justice experiments to date, he says “We don’t make decisions based on a wealthy few. Some may be fair-weathered friends, but they will be replaced by others.”

What others? The concentration of major corporations once pulled talent to the city from across the globe; if you wanted to work for JP Morgan on Wall Street, you had to live here. That’s why NYC has skyscrapers; a lot of people once needed to live and especially work in the same place. Not any more. Technology and work-at-home changes have eliminated geography.

For the super wealthy, New York once topped the global list of desirable places to live based on four factors: wealth, investment, lifestyle and future. The first meant a desire to live among other wealthy people (we know where that’s headed), investment returns on real estate (not looking great, if you can even find a buyer), lifestyle (now destroyed with bars, restaurants, shopping, museums, and theaters closed indefinitely, coupled with rising crime) and…

The future. New York pre-COVID had the highest projected GDP growth of any city. Now we’re left with the question if COVID continues to hollow out the city, who will be left to pay for New York? As one commentator said, NYC risks leading America into becoming “Brazil with Nukes,” a future of constant political and social chaos, with a ruling class content to wall itself off from the greater society’s problems.