The Truth About ‘Hands Up, Don’t Shoot’ 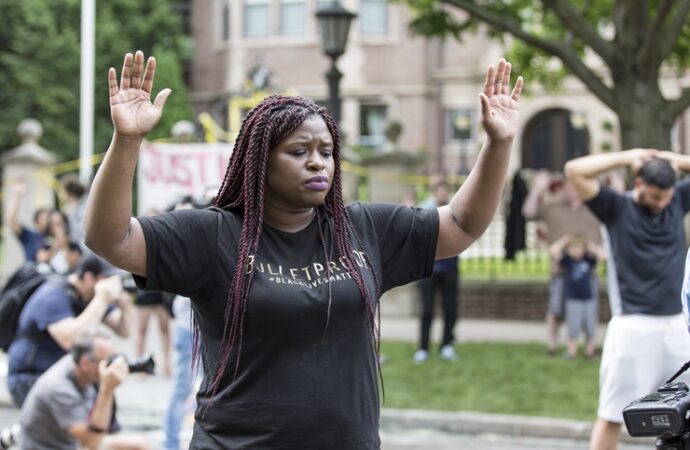 Opening my Wall Street Journal Monday morning, I saw a color photo with the caption, “SAD ANNIVERSARY: Michael Brown Sr. released a pink dove Sunday as the family marked six years since his son, 18-year-old Michael Brown Jr. was shot and killed by a police officer in Ferguson, Missouri.”

If you did not know any better, you would assume that Michael Brown Jr. was unlawfully killed; the officer involved must have committed a crime.

But that is not what happened.

The death of Michael Brown Jr., and the street violence that immediately ensued, is said to have birthed the Black Lives Matter movement, engulfing not only Ferguson, but eventually the whole nation following the death of George Floyd. It also birthed the “hands up, don’t shoot” mantra.

Unless you’ve been living on Mars, you probably know that the white police officer, Darren Wilson, who shot Brown, was never prosecuted, though not for lack of trying.

What you may not recall – because it is now treated as historical fact – is that the claim that Brown put his hands up in surrender is not true. It did not happen. But try telling that to an America that does not want to wait for facts, let alone acknowledge them once they are established.

I mentioned to a relative that I was writing about Ferguson, saying I was disturbed that our country was being rocked by a movement based on a false narrative. As if on cue, she responded angrily, “Look, I don’t remember the details but all I know is there are millions of black people being hunted down and murdered by the police.” She then accused me of “white privilege,” quickly shutting down the conversation.

The “white privilege” narrative fits nicely with the idea that police are dead set on killing black people. Yet this runs counter to facts that researchers like Heather Mac Donald have uncovered. With rare exceptions – like the execution of 17-year-old Laquan McDonald by Officer Jason Van Dyke in Chicago – it is black-on-black violence that is devastating families and inner-city neighborhoods, not the police. It is much easier to blame the police, and a racist, white America, than to face head on the breakdown of the black family that leads to so many clashes with police.

Who would want to be a cop, black or white, in an American city today? Darren Wilson’s case would certainly make anyone think twice about entering law enforcement.

For those who have never dug beyond the “hands up, don’t shoot” mantra, you may be interested to know that a St. Louis County grand jury declined to indict Wilson. The Obama Department of Justice also declined to prosecute Wilson, for he was found to be acting appropriately in self-defense.

Understandably, the local grand jury result was regarded with suspicion; that is why the prosecutor, in an unusual move, released all the evidence. The Brown family, at time, asked the community to act with restraint and to focus on fixing the deep distrust between Ferguson’s black community and the white police force. Since that time Michael’s parents, who never married and had Michael when in their teens, have become activists “in search of justice.”

The quest for a Wilson indictment has continued even recently when local politician Wesley Bell made it an issue in his campaign for St. Louis County prosecuting attorney. Yet even Bell announced just last month, that he, too, would not charge officer Wilson.

Mr. Bell said that after a review of the evidence, his office wouldn’t be able to prove that Mr. Wilson committed murder or manslaughter under the state’s definitions of those crimes. But he said he didn’t intend for the decision to exonerate Mr. Wilson.

Apparently, Officer Wilson will never be “exonerated” even though the facts are simple: Brown reached into a police vehicle, grabbing and setting off Wilson’s service gun. He then advanced on Wilson outside of the vehicle instead of surrendering. That is why Michael Brown Jr. is dead.

Yet the mainstream media continues perpetuating the “hands up, don’t shoot” narrative which resulted from false testimony that Brown was murdered after putting his hands up in surrender.

No one should imagine that any of this is helping the black community. The surge in murder rates across the country, in the wake of the anarchy unleashed after the Ferguson, Missouri and Baltimore riots, has taken a wholly disproportionate number of black lives.

But to the race hustlers, black lives don’t really matter nearly as much as their chance to get publicity, power, money, votes or whatever else serves their own interests.

Indeed. As the news shows, the anniversary of Michael Brown’s death is marked by protesters clashing with police in Ferguson and Phoenix.

This is a sad anniversary for Michael’s family because his life did matter. But it is also a sad anniversary for our nation. It marks six years of a country torn apart by a lie. A lie that divides us and makes it impossible to even talk about, let alone solve, the cultural chaos that leads to so many dead black men and boys.