Our Problem Is American Apophenia 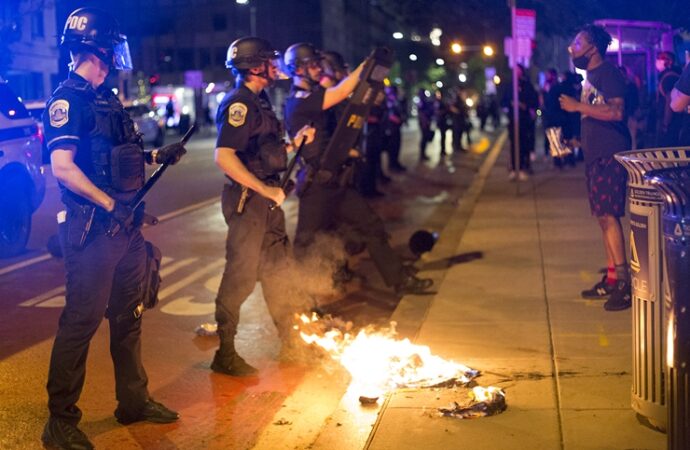 A reader of my articles sent me the following two words along with the cryptic suggestion that, given our times and my sensibilities, I might make use of them in a column.

Having no idea at all what either word meant, I looked them up online and unearthed these definitions:

Apophenia (/æpoʊˈfiːniə/) is the tendency to mistakenly perceive connections and meaning between unrelated things. The term (German: Apophänie) was coined by psychiatrist Klaus Conrad in his 1958 publication on the beginning stages of schizophrenia.

Pareidolia (/pærɪˈdoʊliə/ parr-i-DOH-lee-ə) is the tendency for incorrect perception of a stimulus as an object, pattern or meaning known to the observer, such as seeing shapes in clouds, seeing faces in inanimate objects or abstract patterns, or hearing hidden messages in music.

Further reading informed me that pareidolia, a secondary condition of apophenia, occurs frequently and is not by itself a sign of mental illness. Most of us, for example, have seen shapes in the clouds, though far fewer people slice open a watermelon and discover the profile of Napoleon Bonaparte.

Apophenia, also called patterning, is also a common human experience. As Bruce Poulsen points out in “Being Amused by Apophenia,” we are wired to connect the dots in a situation, to look for patterns in the world around us. When we become apopheniacs, which most of us do from time to time, we’ve misread those dots. A carpenter arrives at the construction site, where the boss seems to give him the gimlet eye, a fellow employee won’t speak to him, and his tool belt is missing from the shed. The carpenter suspects he is about to fired or that his fellow workers bear some ill-will toward him, whereas the truth is the boss got up on the wrong side of the bed, the silent employee is suffering from a hangover, and the carpenter left his tool belt on the front seat of his truck.

He’s misconnected the dots, and no harm done.

This is not always the case. Apophenia, as Poulsen reveals, can lead to “confabulations based on misperceived patterns” with “potentially adverse social consequences.” Taken to an extreme, this human phenomenon can become pathological.

After pondering this information, it struck me that my clever correspondent was onto something.

In a society that denies objective truth and replaces it with relativism – my truth is equal to your truth, buddy – sooner or later our perception of reality can come unglued. Like the paranoid schizophrenic, we begin to obsess about patterns, dark and ominous connections that are non-existent except in our minds.

Conspiracy theorists are classic examples of apophenia gone off the tracks. The Twin Towers burned and fell not from the planes that struck them, but from some government plot to explode the two buildings. The American moon landings were bogus, operations conducted in a warehouse designed to resemble the surface of the moon.

Allow me an example of my own bout with apophenia. When the Cathedral of Notre Dame caught fire, I blamed radicals for that destruction. After all, they had vandalized or tried to burn many other French churches. They seemed naturally suspect to me.

French authorities have since concluded an electrical apparatus caused the fire. Begrudgingly, I concede I erroneously connected the dots.

Today this dark side of apophenia is affecting the perceptions of many Americans. Some academics and politicians sincerely believe, for example, that all whites are racists and that the police are racists too, even though many officers are Hispanics and African Americans. Despite the mountains of documentation accumulated over the past hundred years that communism delivers only failed and murderous governments, some Americans continue to tout the benefits of Marxism, while some hold that America from its very beginning aligned itself with the powers of darkness, that the history of our country offers only a story of evil and oppression.

We see this same disconnect from reality in our politics. Some of the decisions made by our leaders in the coronavirus pandemic, such as banning the use of hydroxychloroquine, or the lockdowns of small businesses like fabric shops or shoe stores, seem unconnected and even counterproductive in fighting the pandemic. “Orange Man Bad,” that label for Donald Trump, is an article of blind faith for some, and many from all political persuasions find plots and cabals where none exist.

These failures to stay within the bounds of reality lead to destruction and even death. In this past week alone, “protesters” in Wisconsin burned businesses, a car dealership, and garbage trucks, supposedly angered by the police shooting a black man. No one paused to await any evidence regarding this incident, and I suspect that few of the rioters, except those with an anarchist agenda, would be able to explain how that shooting justifies destroying the businesses of innocent people, some of them African Americans.

I’m not sure there’s a cure for the apopheniacs among us, many of whom have crossed the line into schizophrenia. But at least we now have a nametag to pin to their chests.

“Uncle Billy’s not responsible,” we can say of that relative arrested for pummeling a grandmother wearing a MAGA hat. “Extenuating circumstances, you know. After all, the poor guy’s suffering a severe case of apophenia.”