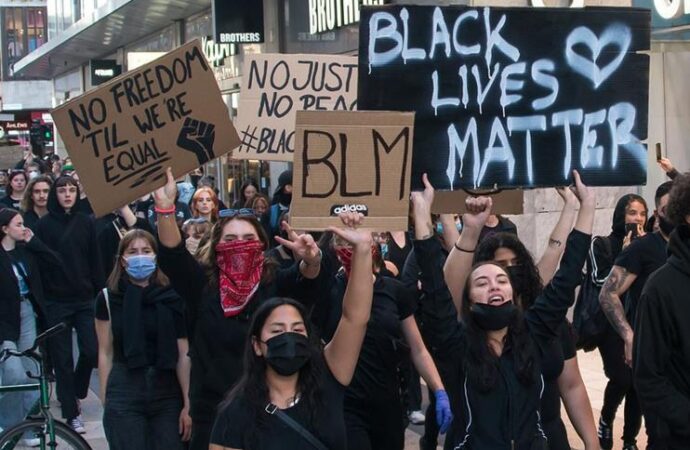 During a recent conversation, a friend of mine hit upon something which, while instinctively knowing it, I had never heard verbalized.

To paraphrase his observation, “All the progressive groups intentionally pick a name you can’t argue against without being labeled a bad person.”

In essence, a basic pre-requisite for a successful progressive organization seems to be a cleverly-worded name that appears harmless, regardless of its actual goals. The more innocuous the phrase, the more you are shielded from criticism, justified or not.

Here are a few examples of groups with more radical agendas who hide behind names which, on the surface, you couldn’t possibly disagree with.

Likely the group most relevant to America’s current political scene, Black Lives Matter is a slogan that very few would disagree with. Even attempting to make a nuanced point about the organization’s goals will see you denounced as a racist.

That’s precisely the point. Such a purpose is even explicitly stated in the group’s manifesto, “What We Believe.” When a group states that “In affirming that Black Lives Matter, we need not qualify our position,” nuance kind of goes out the window.

Thus, we are supposed to profess our allegiance to Black Lives Matter, bend the knee, or else we must think that black lives don’t matter. Pay no attention to the positions behind the curtain, nor the trans-activism, nor the “queer-affirming network,” nor the “intention of freeing ourselves from the tight grip of heteronormative thinking.”

Especially don’t pay attention to the Marxist training of Black Lives Matter’s leaders. Like Marx, Black Lives Matter aims to “disrupt the Western-prescribed nuclear family structure.” Never mind all that though… just focus on the slogan.

I doubt you can find many people who don’t think gun safety is an important thing. In 2017, Pew Research found that 95 percent of American gun owners with children at home think it is important to talk to their kids about gun safety. The National Shooting Sports Federation agrees, as evidenced by their Project ChildSafe initiative.

But Everytown for Gun Safety is a different matter. It isn’t really advocating for the responsible use, storage, and handling of firearms. Among its accomplishments, the organization lists pressuring private businesses to “prohibit the open carry of handguns in their establishments,” defeating expansions of stand your ground laws and campus carry, and organizing 850 March for Our Lives events. March for Our Lives supports, among other proposals, a “national gun buy-back and disposal program” and reforming the Supreme Court, because of the District of Columbia v. Heller decision which affirmed that the Second Amendment protects an individual’s right to keep and bear arms for self-defense purposes.

Responsibly planning the conception of a child is obviously a good thing. There are many things to plan for, and many circumstances to take into consideration to give a child their best chance in life. The question is not if you should plan your parenthood, but how one does that planning.

Planned Parenthood’s solution is the taxpayer-subsidized distribution of artificial birth control and utilization of mass abortion. Contrary to the claims that abortion ought to be “safe, legal, and rare,” in 2016, 623,471 legally-induced abortions were reported to the Centers for Disease Control. This amounted to “11.6 abortions per 1,000 women aged 15-44 years, and the abortion ratio was 186 abortions per 1,000 live births.” These numbers were the lowest in the last decade of the CDC’s abortion statistics.

That’s not planned parenthood. That demonstrates a profound lack of planning.

For just reasons, spouses may wish to space the births of their children. It is their duty to make certain that their desire is not motivated by selfishness but is in conformity with the generosity appropriate to responsible parenthood. Moreover, they should conform their behavior to the objective criteria of morality…

Periodic continence, that is, the methods of birth regulation based on self-observation and the use of infertile periods, is in conformity with the objective criteria of morality. These methods respect the bodies of the spouses, encourage tenderness between them, and favor the education of an authentic freedom.

The amount of real, honest-to-goodness, American fascists out there who would object to the name “Anti-Fascist” is rather low. Middle school lessons about the horrors of Nazi Germany and Fascist Italy are enough to turn anyone into an anti-fascist. But in terms of the loosely connected and rather ambiguous collection of groups calling themselves Antifa, the name is really just something to hide behind and justify the use of fascist tactics.

For example, in 2017, Rose City Antifa announced it would be “unapologetic” in its use of “physical militancy” to harass and intimidate Trump supporters. Meanwhile even excuse-making intellectuals attempt to tie Antifa’s heritage back to early 20th century anarchist and communist groups, hardly the sort of pedigree that would make this group acceptable for ordinary Americans. These crusaders echo the tactics of the black and brownshirts, while hiding their goals behind an opaque name and hiding their faces behind masks.

Hiding behind innocuous names may serve these groups’ rhetoric for print and digital media, but any close examination of their goals and actions quickly reveals their purposes are far more out of step with the politics of most Americans than their names would suggest.