Dismantling America Without a Replacement 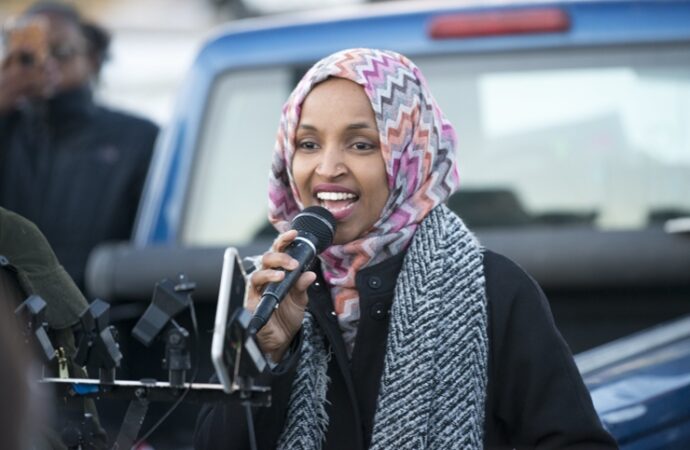 Calls to dismantle this group or that institution have become the topic du jour in American politics. It started with police departments and the criminal justice system, then it spread to museums, and now one Democratic congresswoman is raising the bar on a logarithmic scale.

In a Tuesday press conference devoted to discussing America’s alleged systemic racism, Congresswoman Ilhan Omar, D-MN, called for dismantling “the whole system of oppression wherever we find it.”

“As long as our economy and political systems prioritize profit without considering who is profiting, who is being shut out, we will perpetuate this inequality,” Omar said. “So we cannot stop at the criminal justice system. We must begin the work of dismantling the whole system of oppression wherever we find it.”

One wonders which economic and political systems ought to replace America’s in order to ensure Omar’s vision of a more equal society.

Somalia, Omar’s home country, supposedly “maintains an informal economy based on livestock, remittance/money transfer companies, and telecommunications,” but the instability of the country’s government means it “lacks the ability to collect domestic revenue.” Lacking an ability to collect and redistribute wealth likely makes this model ill-suited for Omar’s vision of America. Somalia also gets knocked for being labeled “the most homogenous country in sub-Saharan Africa,” with roughly 85 percent of its population being ethnic Somalis. Zero points for the diversity score, folks.

What about nations such as China, Cuba, Venezuela, and North Korea? The Communists who lead these nations always end up engaging in slavery, mass murder, and other terrible human rights violations, and only those at the very top see any benefit of this supposedly lovely and egalitarian system. One would assume that such an arrangement would be no better to Omar than America’s supposed crimes. In fact, she did condemn China’s current campaign of ethnic cleansing against the Uyghur Muslims, so we can likely rule this system out as suitable for replacing America’s current one.

Now, those Nordic countries, with their so-called democratic socialism. Accepting of refugees (at least before COVID-19), purveyors of single-payer health care and high taxes… ahh, this must be paradise, and the model to replace America’s tyrannical systems! Unless, of course, the democratic-socialism label is a complete myth perpetuated by Sen. Bernie Sanders, and one explicitly rejected by leaders of Scandinavian countries.

“Our economic freedom is at the level of the United States, and Denmark is a good place to invest,” then Danish Prime Minister Lars Løkke Rasmussen said in a 2015 speech, adding that Denmark is a market economy which allows both employees and employers much freedom.

The Scandinavian model clearly understood would be anathema to Omar, so instead she, Sanders, Alexandria Ocasio-Cortez, and others content themselves with spinning a fictitious view of Sweden, Denmark, and Finland to push policies that those countries have either never had, or have tried, suffered under, and repealed in favor of a freer system of governance.

Omar may want to dismantle America’s criminal justice, economic, and political systems, but it is doubtful that she has anything to replace them. It is even less likely that any system she and the far-left devise would actually work to the benefit of the American people.

But that is irrelevant to these politicians. Their desires seem to be not so much to build up their constituents, as they are to degrade and destroy what their predecessors in office and political theory have built. If there are no remaining works, structures, or edifices built by or dedicated to the great men and women who preceded them in power, then there will no longer be a stick against which today’s politicians and their legacies can be measured.

In 1787 Benjamin Franklin wrote “Information to Those Who Would Remove to America,” an essay addressed to Europeans imagining an easy and wealthy life for themselves on the new continent. Franklin penned this work to dispel that illusion.

“[I]t is imagined by Numbers that the Inhabitants of North-America are rich, capable of rewarding, and dispos’d to reward all sorts of Ingenuity; that they are at the same time ignorant of all the Sciences; & consequently that strangers possessing Talents in the Belles-Letters, fine Arts, &c. must be highly esteemed, and so well paid as to become easily rich themselves…. These are all wild Imaginations; and those who go to America with Expectations founded upon them, will surely find themselves disappointed.”

The hard work of its citizenry is still a central tenant and driving force of America’s economic system. Based on the availability of resources and the preferences of its people, some careers are valued more highly than others. Yet America’s system allows for upward mobility, and an unequal sharing of rewards in proportion to the value of an idea or product is part and parcel of that mobility.

Propping up businesses which fail and oppressing those which succeed on their own merits may serve Omar’s base, but it is not American. In fact, as such an action would limit class mobility, it’s a rather aristocratic way of thinking, which, as we’ve seen in socialist and communist countries throughout history, serves only to engage in what Winston Churchill eruditely labeled “the equal sharing of miseries.”

Besides, as Franklin said later in “Information,” there is great virtue to be found in hard work, and its abolition does not bode well for a society either.

“The almost general Mediocrity of Fortune that prevails in America, obliging its People to follow some Business for Subsistance, those Vices that arise usually from Idleness are in a great Measure prevented. Industry and constant Employment are great Preservatives of the Morals and Virtue of a Nation.”

Perhaps it’s time to leave the system alone, Congresswoman. After all, it seems to have worked out more than just fine for you.