City Councils Cave When Faced With the Marketplace of Ideas 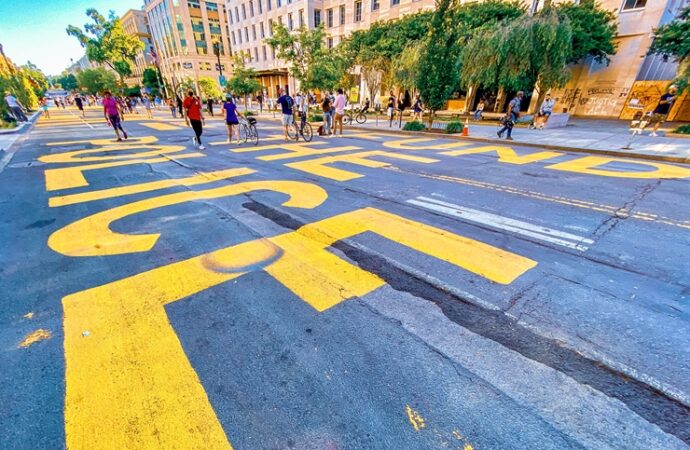 City councils across America almost seem intent on proving that the best cure for a bad idea is a good idea, though, they are going about it in a rather interesting new way.

The Washington Post reports that a Black Lives Matter street mural – which stood for a month and a half and greeted President Trump when he flew in for a campaign rally – has now been ordered washed away by the Tulsa City Council. Rather than a change of heart on the BLM message, the removal comes after a Tulsa County Republican Party official inquired about the possibility of painting “Back the Blue” on a nearby street in support of the Tulsa Police Department.

The City Council refused, despite having turned a blind eye to the permit-less Black Lives Matter mural for weeks. Stuck in a double standard, they ordered the removal of the existing mural.

“I applaud it. It’s great,” Councilor Connie Dodson said according to the Post. “But at the same point it comes down to: Yes, if you allow one, then you have to allow all of them.”

Last week, a similar decision was made by city officials in Redwood City, California after a local attorney requested permission to paint “MAGA 2020” on a street neighboring that city’s own Black Lives Matter street mural.

The effectiveness of asking to paint a mural with slogans countering the political aims of Black Lives Matter is in sharp contrast to vandalism attempts to cover up their street art.

For example, the mural in front of Trump Tower in New York City has been defaced multiple times, and it just keeps getting repainted, with the latest vandal being arrested and charged with criminal mischief. In Cincinnati, the artists of a BLM mural are restoring their vandalized work, even while police are investigating the crime. Meanwhile, a district attorney’s office will be charging vandals of a Black Lives Matter street mural in Martinez, California “with three misdemeanor counts, including a hate crime.” Convictions on these charges could mean up to a year in jail.

Attempts to place contrary speech on America’s city streets have been very effective at countering Black Lives Matter’s rhetoric. Mere vandalism, on the other hand, has served to reenergize BLM’s supporters, and cost vandals a great deal as they run afoul of the law.

Despite what you may have heard in contemporary political movements and the mainstream media, there still is a right and wrong way of doing things. America has always valued the free exchange of views, the marketplace of ideas. Now is not the time to abandon that.

“To allow opposition by speech seems to indicate that you think the speech impotent, as when a man says that he has squared the circle, or that you do not care wholeheartedly for the result, or that you doubt either your power or your premises. But when men have realized that time has upset many fighting faiths, they may come to believe even more than they believe the very foundations of their own conduct that the ultimate good desired is better reached by free trade in ideas — that the best test of truth is the power of the thought to get itself accepted in the competition of the market, and that truth is the only ground upon which their wishes safely can be carried out. That, at any rate, is the theory of our Constitution. It is an experiment, as all life is an experiment. Every year, if not every day, we have to wager our salvation upon some prophecy based upon imperfect knowledge. While that experiment is part of our system, I think that we should be eternally vigilant against attempts to check the expression of opinions that we loathe and believe to be fraught with death, unless they so imminently threaten immediate interference with the lawful and pressing purposes of the law that an immediate check is required to save the country.”

If we are to lose this theory of our Constitution, this belief in the marketplace of ideas, our rhetoric – already toxic enough – will only get worse.

Perhaps instead of dealing with those whom we disagree with by shutting them down, we would be better off to propose alternatives. At this stage of America’s political life, how many of us can even imagine a world in which we build up, instead of merely tear down?

Put in a call to your city council. Perhaps a line of reason, rather than violent emotion, is just the thing they need to have the courage to utilize their own common sense. It can’t hurt to try.