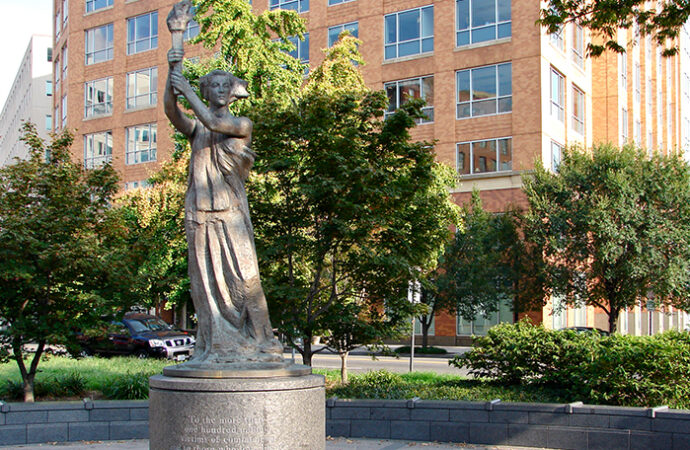 A memorial to the more than 100 million people killed by communism was vandalized in the midst of the protests resulting from George Floyd’s violent death at the hands of Minneapolis police officers.

(1/2) Last night the Victims of Communism Memorial in DC was vandalized.

You do not advance justice by defacing our country’s memorial dedicated to one of the largest victim groups in human history—those killed by communist parties in power. pic.twitter.com/xafbxddjin

Marion Smith, the executive director of the Victims of Communism Memorial Foundation tweeted images of the vandalism Tuesday. Photos show “BLM” and what looks to be part of another word spray painted on the statue.

In interesting, if perhaps coincidental timing, this vandalism of a tribute to the dead occurs the same week as the anniversary of the Chinese Communist Party’s (CCP) brutal suppression of the 1989 Tiananmen Square protests, resulting in an estimated death toll of thousands of protesters as the full weight of China’s military descended upon its citizenry.

The Victims of Communism memorial statue is a duplicate of the “Goddess of Democracy” statue which was a 10-meter tall construct assembled during the 1989 Tiananmen Square protests in China. Work began on May 27 in the Central Academy of Fine Arts, before students there surreptitiously moved the statue in pieces, avoiding state security, and assembled it in Tiananmen Square on May 30.

She stood for only five days before a People’s Liberation Army tank toppled her on live television on the CCP’s orders.

Again, hundreds or thousands of people died working for democracy and freedom as the Goddess of Democracy fell at the hand of a tyrannical regime. Throughout the 20th century and into the 21st, Communism has oppressed people around the globe, and resulted in the deaths of roughly 100 million people. It’s not even as if this is a racial issue, as Communism has oppressed people of all races, religions, and creeds from Russia and Poland, to Cuba and Nicaragua, to China and Cambodia, to Egypt and Guinea-Bissau.

To be sure, there are thousands of peaceful protesters who are legitimately protesting the death of George Floyd at the hands of Minneapolis police officers. Yet to attack such a memorial during the midst of protests that supposedly have a goal of challenging government oppression toward part of its citizenry is incredibly wrongheaded and ill-informed.

Rioters, and the vandals who desecrated the Victims of Communism memorial, are not only missing the point, they are subverting the efforts of those who really seek justice.

With reports of Antifa involvement in riots across the country, and Smith’s note that the memorial has been targeted by Antifa and socialist agitators before, it is clear that there are many people using George Floyd’s tragic death as an excuse and cover, and engage in political and criminal activities condemned by Floyd’s family, completely unrelated to the original cause of the protests.

But that doesn’t matter to the rioters. They have utopia to bring about, and the ends justify the means after all, don’t they?

Frank S. Meyer explained how Marxists and their brethren view the world in his essay The Locus of Virtue:

“[A] prevailing mystique of our era is the belief that a transformation of the economic relations into which men enter can, somehow, magically solve human problems and create virtue. The modern source of this belief is Marxism, with its quasi-religious dogmatic certainty that direction of the economy by the state will bring about a paradise on Earth.”

Socialists and Antifa aren’t against government violence directed toward citizenry. On the contrary, it’s a necessary part of their philosophy! Outrage happens to be an easy tool they twist to their advantage. What does it matter what George Floyd’s family wants if there’s an opportunity to strike a blow for socialism?

The “quasi-religious dogmatic certainty” of their beliefs overwhelms any conflict of victimhood that might arise from vandalizing a memorial to the victims of communism. It simply doesn’t enter their thoughts that such an act is in conflict with the issue at hand, nor that it may serve to discredit the movement.

That being the case, is it really any surprise the Victims of Communism memorial was defaced this week? Without any knowledge (or acceptance at the very least) of communism’s failures, what would stop a wannabe Mao, Pol Pot, Castro, or Stalin from assaulting the Goddess of Democracy, especially with such a volatile political background to hide behind?