On Our Own in the Face of Anarchy 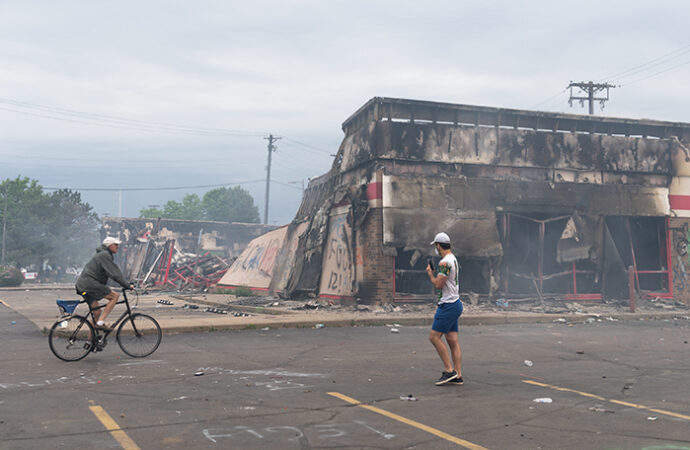 It’s 2 A.M. and you are sound asleep in your basement apartment when a crash from upstairs awakens you. You sit up groggily, wondering if you are dreaming the voices and laughter you hear from upstairs. When you hear more crashes and more laughter, a rush of adrenaline brings you quickly to your feet.

Slipping on a pair of shoes, you grab the loaded .22 rifle with its six-shot clip from the wall beside the bed. You own a couple more formidable firearms, but you’ve always felt most comfortable with this rifle as a weapon of defense. It’s accurate, and its short barrel makes it an ideal weapon for use in the home.

Up the steps you go. There’s no need for stealth – the hoots and loud voices cover the creaking stairs.

Stepping into the wide space of the kitchen and family room, you find three people enjoying themselves as if at a party. One is drinking from the bottle of gin while sitting on the breakfast table, directing his two comrades. “Take the laptop,” he says. “And be careful with that vase. It might be worth something.”

The girl is gathering up things – the wallet you’d left on your writing table, the cell phone plugged in and recharging by the sink, the checkbook lying by the laptop. The third guy is strolling through the family room spraying the wooden floor with an accelerant from a plastic bottle, the odor of gasoline already filling the air.

You raise the rifle, stock in your shoulder, and order them to stop.

For just a flicker of a moment, they stare at you in shock. Then the girl shoots you the middle finger, the man sitting on the table calls you a fascist pig, and the man with the accelerant continues squeezing the bottle.

Do you head outside so you don’t burn up along with the house?

Do you plead with them to leave the premises?

Or do you start shooting?

Some of us might shrug and abandon the house to the flames, telling ourselves that these young intruders were frustrated by our political system.

Others might attempt to appeal to their better natures, explaining that if they destroy and steal all that we own they will leave us homeless and with no means of supporting ourselves.

And some of us, including me, would begin shooting without a qualm in the world.

As I construct this scenario, cities have been burned and besieged across the United States. In Washington D.C., which is about 80 miles from where I live in Virginia, rioters set fire to the historic St. John’s Episcopal Church, defaced statues on the National Mall, including the Lincoln Memorial, and attempted to storm the White House, injuring 60 Secret Service agents.

Elsewhere, mobs have looted stores, burned cars – including police vehicles – and beat up civilians who tried to stop them. In some of these cities, the police are often nowhere to be seen, leaving thugs, looters, and political radicals in command of the streets.

The reaction to this violence and mayhem by some of the mayors and some state governors should appall us. One of their primary duties is to protect those who elected them, their lives, and their property. The riots have ripped away that mask, exposing them as weak and ineffectual leaders unable to bring order out of chaos. Instead of taking command of the situation, these “leaders” have blamed President Trump and white supremacists for the battles in their cities.

A famous paraphrase of George Orwell notes, “People sleep peaceably in their beds at night only because rough men stand ready to do violence on their behalf.” In some cities, a few rough men carrying weapons stood guard outside some stores around the country and so prevented their demolition, but our governments and our police have failed miserably to contain what has become a war on this country. Those restaurants going up in flames and those looted stores are not just property. They embody the dreams, aspirations, and hard labor of human beings. They provide a living for those who work there and goods for those who shop there.

What do we do in the face of such anarchy? What do we do when we can no longer count on our governments to protect us, our loved ones, and our homes and businesses?

My advice: Buy a gun. Learn how to use it safely. And then prepare to defend yourselves.