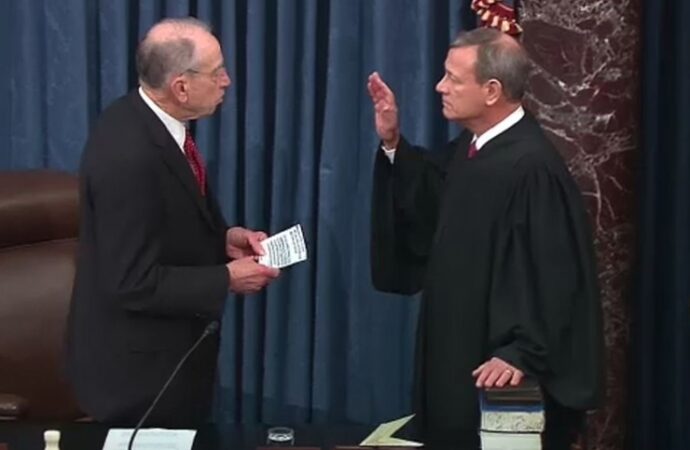 Today’s news reads like it’s ripped straight from the pages of the Old Testament. Plagues and protests dominate the headlines.

But unlike Moses, who received his law directly from God, ours today derives from mere mortals. It’s mostly good, but still fallible.

As a result, sometimes an individual’s views of God’s law and man’s law are in tension, and a debate has been simmering about how much protection the First Amendment’s Free Exercise Clause provides when these situations arise.

The recent rash of coronavirus-related restrictions on churches and other religious communities has brought this simmering tension to the surface.

Late on the evening of May 29, the Supreme Court released an important, but easily overlooked, order in South Bay United Pentecostal Church v. Newsom denying a California church’s request for an injunction against the state’s phased reopening plan.

The church alleged that the plan violated its First Amendment free exercise rights by treating similarly situated, nonreligious businesses and activities more favorably than religious ones.

That prompted a debate among the justices.

The court’s four conservative members disagreed. Justice Brett Kavanaugh wrote a dissent that Justices Clarence Thomas and Neil Gorsuch joined. (For some unknown reason, Justice Samuel Alito didn’t join Kavanaugh’s dissent. We can only speculate as to why).

Kavanaugh wrote, “I would grant the Church’s requested temporary injunction because California’s latest safety guidelines discriminate against places of worship and in favor of comparable secular businesses. Such discrimination violates the First Amendment.”

On its face, the order appears to turn simply on a disagreement among the justices about which activities are most like going to church. If it’s more like going to a movie or a play, or attending a ballgame, no problem. California had restricted those activities in a similar way to church gatherings.

If it’s more like going to the office, a restaurant, or shopping, there’s a problem. California would have been treating similarly situated, nonreligious activities more favorably than religious ones.

But the disagreement among the justices and its implications might run deeper and highlight an important issue left unaddressed by—but at the heart of—the ruling: What’s the proper level of scrutiny to apply when deciding free exercise claims?

It’s true that this case came to the court from a unique procedural posture—requesting immediate and preliminary relief—so it might be difficult to read too much into it.

The chief justice asserted that such a request “demands a significantly higher justification” than others and that the “legal rights at issue [must be] indisputably clear,” and even then, the relief requested must be used “sparingly and only in the most critical and exigent circumstances.”

It’s also true that the case came up to the court during a pandemic, something that clearly weighed heavily on the mind of the chief justice, who wrote that the Constitution “principally entrusts” elected officials to deal with health crises and other “areas fraught with medical and scientific uncertainties.”

As is common in these types of orders, the other four justices in the majority didn’t make their reasoning or rationales known. But given Roberts’ statements and rationale, it’s also probable that the same decision would have been reached had the majority explicitly applied rational basis review to this matter.

In other words, so long as California’s government had a rational reason for adopting the rules it did and the rules treated everyone equally—even equally badly or restrictively—those rules would survive constitutional scrutiny, even if other less restrictive means for accomplishing those same goals had been available.

After all, the chief justice wrote, “The precise question of when restrictions on particular social activities should be lifted during the pandemic is a dynamic and fact-intensive matter subject to reasonable disagreement.”

The minority disagreed. In his dissent, Kavanaugh explicitly applied strict scrutiny to resolve the matter. He would have required California to show a “compelling government interest” in its rules and to show that it had “narrowly tailored” those rules “to advance that interest.”

Who cares? This sounds like an esoteric argument among nine justices far removed from the humdrum of everyday life. But it’s far from it.

This distinction is fundamentally important. Why? Under rational basis review, the church lost. Under strict scrutiny, the church would have won.

Currently, the court’s precedent, specifically Employment Division v. Smith (1990), requires courts to apply only rational basis review for many—if not most—free exercise claims under the First Amendment. It applies only when courts are reviewing neutral laws (or rules) of general applicability.

If churches are targeted for discriminatory treatment, a different analysis, one applying strict scrutiny, applies. The Supreme Court clarified that in its Church of the Lukumi Babalu Aye v. Hialeah (1993) decision. Still, Employment Division v. Smith upended the court’s precedent and practice of applying strict scrutiny—even if it didn’t explicitly call it that—in most prior free exercise cases, such as Wisconsin v. Yoder (1972), Sherbert v. Verner (1963), and Cantwell v. Connecticut (1940).

The court struck down significant portions of that statute, too, limiting its application only to claims against the federal government and not to those against the states.

Fortunately, the tides may be turning. In January 2019, Alito wrote a concurrence in a denial of certiorari in which he lamented that the court in Employment Division v. Smith had “drastically cut back on the protection provided by the Free Exercise Clause.” Thomas, Gorsuch, and Kavanaugh joined that concurrence.

It’s worth noting that these are the same four justices who dissented in the current case.

More importantly, in February, the court agreed to hear a case that explicitly asks it to revisit its decision in Employment Division v. Smith and to replace it with “a standard that is true to the text, history, and tradition of the Free Exercise Clause.” Who wouldn’t want that?

As John Yoo and James Phillips have pointed out, the court in Employment Division v. Smith went wrong in part because “its author, [then-Justice Antonin] Scalia, failed to engage with the original meaning of the free-exercise clause. While normally persuaded by historical arguments, Scalia instead worried about cabining judicial discretion.”

This same concern comes through in Roberts’ concurrence denying relief to the California church.

Scalia was a legal lion, but he got Employment Division v. Smith wrong. With the hindsight of history, Roberts would do well to avoid making the same mistake, by seizing an opportunity, perhaps during a calmer time, to correct Scalia’s rare misstep and restore religious freedom to its proper place in our constitutional order.