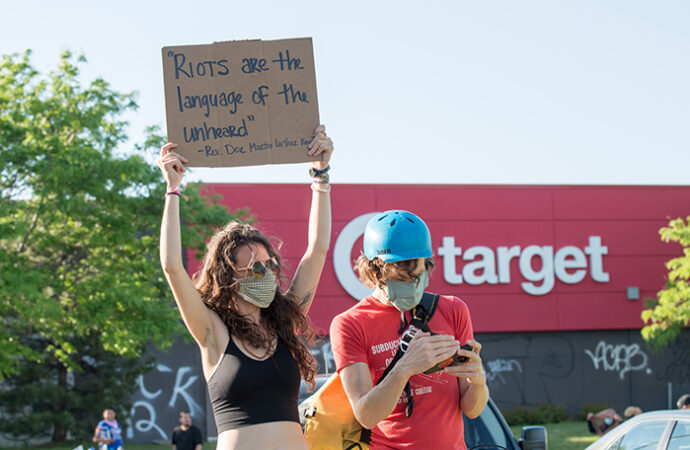 In the taxpayer-funded, cushy corridors of leftist academe, the radically chic proselytizers of hatred smugly define their concept of “White Privilege”: If you don’t need to care about a societal problem, it is because of your white privilege. (The shorthand for “White privilege” is simply “privilege,” because 1619.)

By pouring this racist tenet of cultural Marxism into those too intellectually and emotionally immature to resist the call to hate others, oneself, and America, the object is to inure its adherents against the ability to measure one’s actions by any moral criteria except vapid virtue signaling. If these insular radicals were still capable of introspection, they’d shortly realize they epitomize “privilege.”

The riots have brought a shameful raft of plunder, violence, murder and the typical host of leftist defenses for the indefensible. After inanely attempting to blame their violence on everyone but themselves, the rioters’ and their Leftist abettors’ most common and callow propaganda point is “we can rebuild property, we can’t bring back the dead.” The ever so slightly less economically illiterate ones dismissively chime in with “big box stores have insurance.”

Of course, these privileged radicals and their “radically chic” celebrity bail bondsmen aren’t tossing money into a rebuilding fund for these economically distressed communities. Rather, they are reinforcing the cycle of mayhem and destruction by bailing out its perpetrators. Now, if one crassly notes this or any other aspect of their dangerous hypocrisy, the radicals and their enablers respond with: “Check your privilege.”

As with climate change’s “the science is settled,” one realizes the slogan “check your privilege” is the programmed default of brainwashed radicals who haven’t yet been told by their indoctrinators what next to say. Nevertheless, scream it they do, when called to account by those harmed by the riots.

Herewith, then, is a brief and by no means exhaustive accounting of the people the rioting radicals and their enablers believe need to “check their white privilege”:

As their callous cries of “check your privilege” to those aggrieved above evince, these armchair Stalinists have had their capacity for empathy indoctrinated away. This makes it all the easier for them not to care about the societal costs and consequences of their actions and ideology, because these costs and consequences won’t hit home or even close to it, especially if that home is a mansion safe within a gated community.

Truly, there is nothing more privileged than thinking one’s own ideological comrades’ criminality is not only excusable; not only justifiable; but morally necessary. This radical privilege of perverting one’s sins into virtues is the cardinal immorality undergirding the intrinsically evil socialist ideologies of communism and fascism.

In juxtaposition, the moral citizens of our free republic agree with the Great Emancipator, President Lincoln: “There can be no successful appeal from the ballot to the bullet.” They also agree with Senator Robert F. Kennedy that “The vast majority of white people and the vast majority of black people in this country want to live together, want to improve the quality of our life, and want justice for all human beings that abide in our land.”

Thus, when order has been restored and Americans heal from this latest spasm of leftist-inspired violence, people of goodwill, sound mind, and stout heart must send a nonnegotiable demand to the rioters and their Liberal abettors before they do more damage: “Check your radical privilege.”