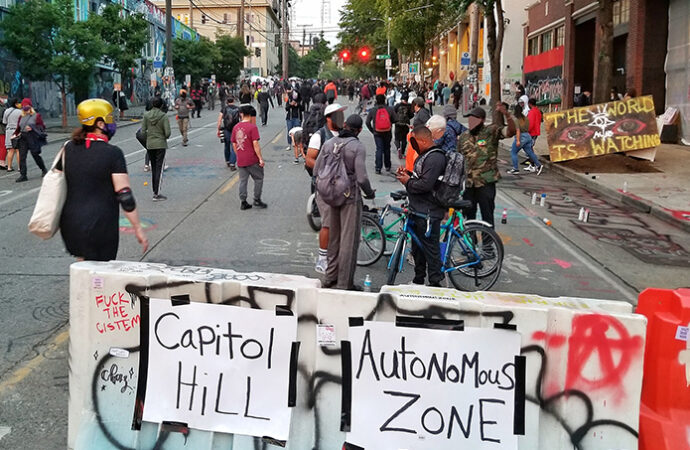 One of the more amusing spectacles of the recent protests has been the establishment of the Capitol Hill Autonomous Zone (CHAZ) – now called the Capitol Hill Organized Protest (CHOP) – in the middle of downtown Seattle, Washington. Conservatives on social media have had a field day making light of the pint-sized experiment in neo-Marxist utopia. Contained within these few square blocks, however, is a microcosm of all the lies and failures of Marxist regimes since the Bolsheviks came to power, and we should pay attention while they are still merely amusing.

Upon the establishment of this little slice of heaven, the local Antifa set about throwing up barricades to create makeshift borders for their new nation. They then took to Twitter and issued a call for armed volunteers to man these borders and the checkpoints they had created. A cynic might be tempted to wonder if all that rhetoric about open borders and the dissolution of nation-states was strictly for public consumption.

Our noble crusaders almost immediately ran into difficulty. While securing their borders against outside incursion they also invited Seattle’s burgeoning homeless population to join them. These newcomers proceeded to steal the burgeoning country’s food supply so that within 72 hours they had run out of food. This has to be a record, even for Marxism.

Their initial solution was to use social media to beg the outside world for food relief. One of the organizers of the CHAZ, an 18-year-old lesbian anarchist who goes by “lauracouç” on Twitter said “the homeles [sic] people we invited took away all the food at the Capitol Hill Autonomous Zone. we need more food to keep the area operational. please if possible bring vegan meat substitutes, fruits, oats, soy products, etc.—anything to help us eat.”

Ever since Herbert Hoover began sending American aid to Soviet Russia, Marxist regimes have only forestalled ruin by leeching off the generosity and resources of productive free nations. Left to themselves, Marxists inevitably engineer catastrophe: the Holodomor, the Great Leap Forward, the Khmer Rouge’s emptying of the cities, North Korean famines.

The second attempt to solve the food problem was as pathetic as it was instructive. Photos began to emerge of a vegetable garden in the middle of the zone. These photos revealed that this “garden” consisted of throwing a few inches of soil atop cardboard(?!) in the middle of a park, and then plopping a few seedlings on top of the soil. They don’t appear to have bothered to plant those seedlings, because why would you need to do that?

It didn’t matter anyway, because within a couple of days video emerged on Twitter of a homeless man destroying the garden, possibly while high.

In this little farce, the Antifa of CHAZ reveal their complete ignorance of anything necessary for a functioning society. Marxist revolutionaries only know two things: Marxist ideology and terror. Before the revolution, Marxists use violence and subversion to undermine society. They spend their lives dilating upon theory and feuding with fellow Marxists over doctrine (think Lenin and Julius Martov in 1902). They’re steeped in ideology, and perfectly useless otherwise. Once in power, they act as though all that is necessary is to implement Marxism correctly, and utopia invariably will follow. Soviet ideologues thought they could create five-year plans and issue production goals, and that the goods would simply be produced because the plan said so.

Marxists are so wedded to Marxist ideology that they can never accept the demonstrated truth that their ideology is precisely the problem. So when their plans fail they conclude that they are surrounded by traitors, wreckers, and class enemies who are subverting the worker’s paradise. Institutionalized terror follows: denunciations, arrests, show trials, gulags, and mass executions. It’s always just a few more executions to utopia, comrades!

CHAZ is already moving in this direction. While denouncing existing law enforcement, it took about two days for a self-appointed police force to begin prowling the Zone, led by an aspiring rapper named Raz Simone. Simone proclaimed himself the leader of a “People’s Force,” implemented a policy of stopping and questioning anyone deemed suspicious, and began employing violence against those who step out-of-line, as the People’s Force understands it.

The rhetoric of “defund the police” dovetails neatly with Marxist notions of the withering away of the state, but it never happens that way. Marxists invariably create armed forces to enforce their ideology, like the NKVD in Soviet Russia and the Stasi in East Germany. The Marxists have a monopoly on force and use that monopoly to crush their enemies, real or perceived. Man ceases to be governed by law and is governed instead by the will of the powerful. Marxism returns man to the state where “the strong do what they will, and the weak suffer what they must.”

In The Gulag Archipelago, Alexsandr Solzhenitsyn demonstrated to the world that the horrors of the Soviet system were not Stalinist perversions, but were inherent in Marxism itself. Marxism is Marxism, everywhere it has been tried: the same tragedy, the same horror, the same man-made disaster.

Antifa in Seattle has done us the favor of reminding us of these realities on a small, comical scale. We can heed these lessons, or be bludgeoned once again by what Solzhenitsyn called “the pitiless crowbar of events.”