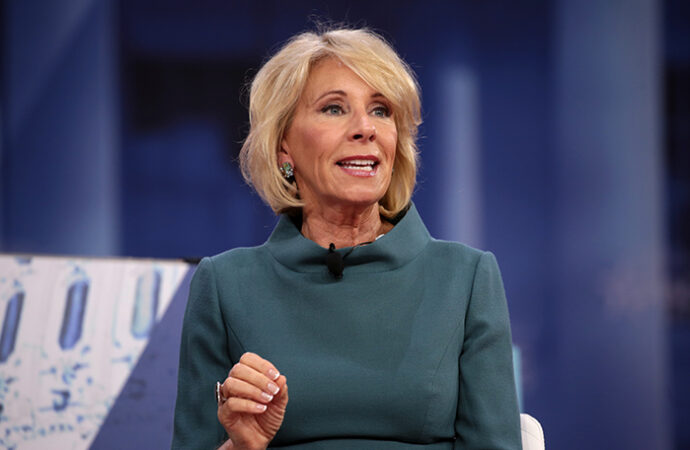 On May 6, Secretary of Education Betsy DeVos unveiled new Title IX regulations concerning sexual harassment and sexual assault on campus. Despite outraged cries of “turning back the clock” that echo across both sides of the Atlantic, the 2,033-page code reasserts the moral, ethical and legal norms that formed the basis of Western society.

The prior definition of wrongdoing was so tantalizingly vague as to be infinitely elastic. “Sexual harassment is unwelcome conduct of a sexual nature,” said a 2011 Dept. of Education guidance. “It includes unwelcome sexual advances, requests for sexual favors, and other verbal, nonverbal, or physical conduct of a sexual nature.” This undifferentiated lump of offenses included everything from rape to unwanted staring. Indeed, a 2015, a Cincinnati-area school suspended a 12-year-old boy for staring at a girl. (An eyewitness said they were having a staring contest.) Such top-down, overbroad criteria left students and administrators alike walking on eggshells.

The updated regulations bring needed clarity. They state that a reasonable person must judge the unwelcome sexual conduct “so severe, pervasive, and objectively offensive that it effectively denies a person equal access to the school’s education program or activity.” They hold administrators responsible for sexual harassment that takes place in fraternities and sororities. And they shield victims from having to directly interact with the accused, or to delve into their sexual history.

The innovative regulations also remove the star chamber quality that has pervaded some campus hearings. Sexual harassment charges frequently have been handled by one person, who investigated and rendered a binding decision without oversight. Defendants often complained of not knowing what they were accused of, and of having exculpatory evidence arbitrarily excluded.

New protections assure that the accused enjoys the presumption of innocence and has the right to know the charges against him or her in full, examine all evidence, have an adviser cross-examine testimony at a live hearing, and appeal the outcome. The new rules also allow universities to progress beyond the “preponderance of the evidence” standard, which is “the lowest standard of proof,” to the more robust “clear and convincing evidence” standard.

Naturally, not everyone is happy. DeVos’ political opponents reacted as if she had just codified The Handmaid’s Tale. Catherine Lhamon, a former ACLU attorney tapped by President Obama to implement the discarded policy, went so far as to say that the revised guidelines make it “permissible to rape and sexually harass students with impunity.”

. @BetsyDeVosED presides over taking us back to the bad old days, that predate my birth, when it was permissible to rape and sexually harass students with impunity. Today’s students deserve better, including fair protections consistent with law https://t.co/Kxn5teeYnE

In reality, the new Title IX standards move campus proceedings from a punitive kangaroo court to a rules-based pursuit of truth. They replace intersectionality with integrity. They uphold moral and legal norms.

Credibility is pivotal, given the stakes riding on such weighty charges. An erroneous allegation can destroy the future of those falsely accused, as it did for the Duke University lacrosse team or the University of Virginia chapter of Phi Kappa Psi. Modern society allows the nature of the charge, rather than the weight of the evidence, to stain the accused so thoroughly that he becomes ineligible for any desirable position.

This was on full display in Supreme Court Justice Brett Kavanaugh’s confirmation hearings. “People keep talking about presumption of innocence. That is a term one uses in a criminal proceeding,” Senator Mazie Hirono, D-Hawaii, told CNN. But a Senate confirmation hearing “is a job interview.”

One need not be appointed to the most prestigious position in American jurisprudence to recognize the harms suffered by those denied an education because of a biased hearing. “College graduates tend to have higher overall earnings than students without college degrees and are less likely to live in poverty,” Anne Rathbone Bradley noted in Religion & Liberty. The earnings difference amounts to $32,000 a year, or $625,000 over a lifetime—and rising.

Since no one truly lives in isolation, the consequences of expelling a student over false allegations reverberate throughout society. One person is unjustly denied the cultivation and most productive use of his faculties. Despite clear biblical injunctions, his innocent children are punished by beginning life behind their peers. Entrepreneurs lose the extra funds that could have been invested or loaned to them. Society is robbed of the contributions all these parties would have made, or inspired others to make, over multiple generations.

DeVos’ guidelines restore to academia the one concept most ubiquitous in its vocabulary but all-too absent from its tribunals: justice. Thomas Aquinas’ Summa Theologiae, following Aristotle, defines justice as “a habit whereby a man renders to each one his due.”

“Justice toward men,” says the Catechism of the Catholic Church, “disposes one to respect the rights of each and to establish in human relationships the harmony that promotes equity with regard to persons and to the common good.” The catechism then quotes one of numerous Bible verses warning rulers not to show partiality to anyone—neither the rich nor the poor alike. Justice proceeds from recognizing everyone’s inherent human dignity and judging people based on their actions, not the accidents of their birth.

Justice’s blindfold must remain firmly in place, her scales swayed only by the weight of the evidence upon them. Secretary DeVos’ Title IX regulations cultivate an atmosphere of justice that leads to social harmony, the punishment of the guilty, and the flourishing of all innocent parties. Her actions deserve our strongest commendation.

This article has been republished with the Acton Institute.