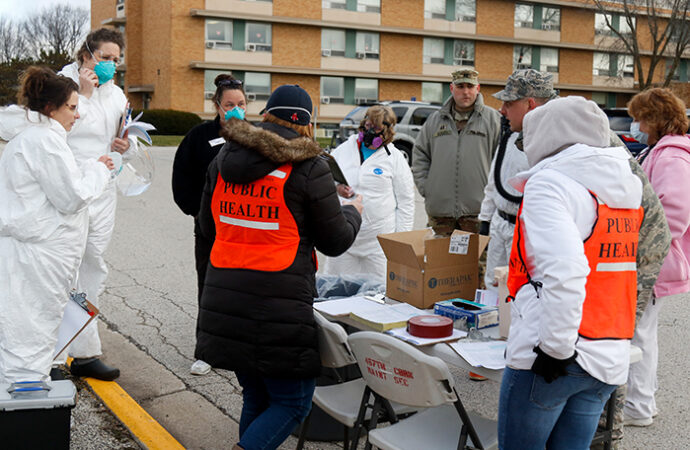 Authors of a new study conducted by researchers at the World Health Organization and Stanford University say there is no evidence of increased transmission of COVID-19 in Wisconsin following the state’s April 7 primary election.

“We analyze confirmed cases and new hospitalizations in Wisconsin in the weeks surrounding the April 7, 2020 election, and find no evidence of a surge in SARS-CoV-2 Transmission,” the authors write.

SARS-CoV-2 is the virus that causes COVID-19. The researchers allowed for a virus incubation period of 10-15 days, noting that most cases would not be reported until April 17.

The findings, which have not yet undergone peer review, are significant because the Badger State came under scrutiny following the decision to hold on-site elections over the objection of the Gov. Tony Evers (D).

Many said it was irresponsible and dangerous to hold elections during the COVID-19 outbreak.

“It’s obvious how voting in public amid a pandemic is not compatible with safety,” Leah Litman, an assistant professor of law at the University of Michigan, wrote in The Atlantic.

The Republican-controlled legislature disagreed, however, and their decision was narrowly upheld (5-4) by the state’s Supreme Court.

Nevertheless, the state’s decision became a lightning rod for critics, even capturing the ire of former President Barack Obama.

“No one should be forced to choose between their right to vote and their right to stay healthy like the debacle in Wisconsin this week,” Obama tweeted.

Tensions continued in the weeks following the election and grew when national media outlets reported that more than 50 Wisconsinites had been diagnosed with the novel coronavirus after casting ballots.

Despite the fears and the anecdotal cases, researchers said hospitalizations for COVID-19 “steadily declined throughout April,” falling from 101 on April 3 to just 14 on April 18.

Wisconsin this week will stop asking COVID-19 patients if they were at the polls on election day. Researchers said the results of their study are clear.

The findings, which have yet to be reported, are important because many nations are seeking to transition away from the state-enforced lockdowns that have resulted in widespread economic distress and have taken a toll on the psyches of Americans and others around the world.

Nations such as Denmark, Germany, and the Czech Republic have recently reopened their economies after instituting lockdowns in March. As of May 4, none of the countries had shown signs of a “second wave” of the virus which has claimed the lives of more than 250,000 people worldwide.

Despite optimistic signs, fears remain high and much of the world remains in lockdown. To some extent, this is to be expected. Individual liberty and collective security are fundamental ideas humans have wrestled with and debated over for thousands of years. Fear has long been freedom’s greatest enemy.

As we grapple with COVID-19, humans must ask themselves a familiar question.

“Is the promise of a perfectly secure world worth the price of our individual rights?” asks my colleague Sean Malone in the most recent Out of Frame. (Marvel fans especially should watch it.)

Recent events in Wisconsin and Europe suggest humans increasingly are beginning to answer no.