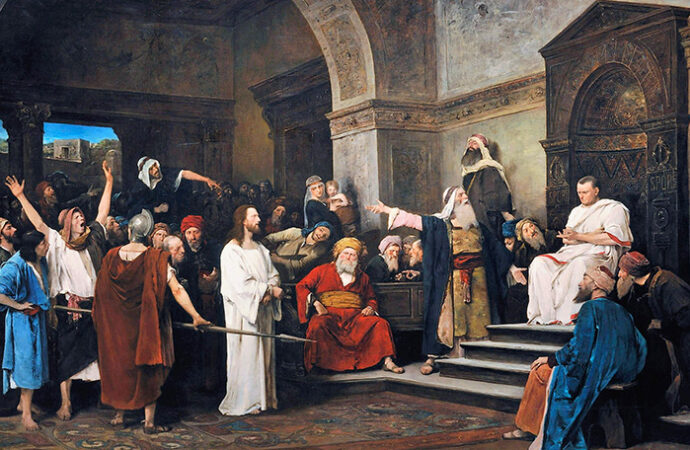 Thus spoke Nietzsche: “Must I add that, in the whole New Testament, there appears but a solitary figure worthy of honor? Pilate, the Roman viceroy. To regard a Jewish imbroglio seriously—that was quite beyond him.… The noble scorn of a Roman, before whom the word truth was shamelessly mishandled, enriched the New Testament with the only saying that has any value—and that is at once its criticism and its destruction: What is truth?” We may forgive Nietzsche his pandering to a mediocrity like Pilate; Nietzsche was intimidated by Christianity and was already in the early throes of his descent into madness when he wrote those lines. So, perhaps, his mistaking cynicism and amorality for nobility is more risible than condemnable.

One cannot fully appreciate the nature of Pilate’s dismissive question about the truth, without assessing it in tandem with his other famous gesture: washing his hands of any guilt or responsibility for the killing of an innocent. Regardless of what Nietzsche said, Pilate was the furthest thing from noble. He was, rather, the quintessential bureaucrat. This elevating of mediocrity and job security to an art form is something all bureaucrats to one degree or another will vehemently dispute even as they indignantly identify with it. In truth, if there is any one historical person who could serve as a model and mascot for all the bureaucrats of the world, Pontius Pilate is that man.

The horror of a painful death is something we Moderns in our comfort and lassitude have a hard time wrapping our distracted minds around. To call such a day like Good Friday good is absurd, but then the whole story is absurd. So absurd that one can almost understand Pilate’s frustration with all the participants, never quite recognizing he too played an unwitting and disgraceful role. As a former government bureaucrat, I too sympathize – even identify – with Pilate: a reliable, conscientious government official just trying to do his job. Neither satanically cruel nor exceptionally incompetent, he tries to do the right thing, but ultimately like almost all other bureaucrats he settles for the course of least resistance – and the course least likely to cause him any future hassle with his bosses. His thinking, if not exactly humane, is certainly sensibly bureaucratic: just stick to the rules and don’t make waves, and no one can complain.

I Die God’s Good Servant, But My Government’s First

In my career I have always been struck by how so many otherwise kind, thoughtful people as I have worked with over a 35-year period could be so cold and calm in being dismissive towards those in need. Bureaucratic rules and regulations provide us not just with guidance, but also with a shield and solace that make it easy to just shrug our shoulders and say: “There’s nothing I can do. The rule is this or the law says thus.” That old Nuremberg Defense – “I was just following orders” – is always there, lurking like a malevolent wraith in the shadows of our minds.

In his book of essays, Raids on the Unspeakable, Thomas Merton criticizes those who characterize the Nazi who orchestrated the Holocaust as insane. Merton rightly understood that if the Nazis were all insane or, at least, all sadists, the horrors they inflicted would be more palatable, more understandable, more tolerable. The myth of the “insane Nazi” is a soothing and dangerous lie. As Merton explains, “one of the most disturbing facts that came out in the (Adolph) Eichmann trial was that a psychiatrist examined him and pronounced him perfectly sane…. The sanity of Eichmann is disturbing.… We rely on the sane people of the world to preserve it from barbarism, madness, destruction. And now it begins to dawn on us that it is precisely the sane ones who are most dangerous.” Merton could have added that it was these same sane people – Caiaphas worried about heresy and the rabble, Pilate worried about rioting and a popular uprising – who sanely ordered the Crucifixion.

We all like to believe that we are different, that if there were a stark moral choice to be made, we would choose good over evil regardless of what our laws or our bosses dictate, but history proves otherwise. As it was with Pilate, it is too easy to wash our hands and hide behind law and leaders. It is one of the great ironies and tragedies of life that most evil is perpetrated by good people who don’t know how to embrace true Obedience by disobeying what is not right.

But I suspect that using the example of Eichmann almost makes a denial too easy. He was a genuine monster, even if a refined and well-manicured one. Eichmann was, after all, intimately involved in designing and implementing the Final Solution. It is too hard for most of us to envision ever going along with such a scheme. I think we good bureaucrats, especially we diplomats, should consider a different German role model: former German Foreign Minister Joachim von Ribbentrop, who also served as Germany’s ambassador to the United Kingdom during the Thirties. Ribbentrop, who is now only remembered, if at all, for signing the Molotov-Ribbentrop Pact, the nonaggression treaty between Nazi Germany and Soviet Russia that precipitated the division of Poland and the outbreak of World War II. What is less widely-known is that he was the first of the Nazis to be hanged by the Allies after being convicted at Nuremburg. The intriguing thing about Ribbentrop is that he was convicted on all four Nuremburg counts, including planning and waging aggressive war. (Ever the good bureaucrat and diplomat, his last words before being hanged were: “My last wish is that… an understanding between the east and west will come about and peace for the world.”) He may well have been guilty on the other counts of the indictment, but even at that time, a criminal conviction based on planning a war of aggression was open to serious criticism. Would not consistency have required that Russia also be condemned for its unprovoked attacks on Poland and Finland? The only discernible difference was that Russia was victorious and Germany was not.

Similarly, what if we were to objectively judge our own wars of aggression, especially the one we planned and waged against Iraq in 2003? There will always be those who insist that the invasion of Iraq doesn’t qualify as a war of aggression because we had valid reason to attack, but Germany in 1939 could also plausibly argue that it had valid reasons to attack: to safeguard the future of the German nation and to protect all of Europe from being overrun by communism. Literally hundreds of decent, hard-working American diplomats and other American bureaucrats steadfastly supported and willingly abetted the Iraq invasion in a thousand varied ways, from lobbying foreign governments to support our war to actually serving in the war zone. Yet what is most disturbing is that while many of those same bureaucrats had grave concerns about the morality and efficacy of the Iraqi War, only a handful actually resigned. Like Pilate before us, we shook off our personal misgivings and pushed ahead with what we were ordered to do.

The Church has what I always thought was an exhaustive list of patron saints, but it turns out that there is no patron saint of bureaucrats. Even tax collectors have a patron saint, but not bureaucrats, and it seems extremely unlikely that either Pilate or Ribbentrop will be canonized anytime soon. Someone once suggested that there isn’t a patron saint for bureaucrats because Satan has already been ceded that domain, while others suggest that there are several applications pending, but they’ve been held up in red tape for over two millennia. (In 2000 Pope John Paul II did somewhat belatedly proclaim Thomas More the patron saint of statesmen, but that is now an extinct species.) But while bureaucrats don’t have a patron saint, at least they have the perfect poster boys in Pontius Pilate and Joachim von Ribbentrop. They are always there as object lessons, the very epitome of competent, hard-working bureaucrats. They were, as Merton might put it, “the sane ones” who always have “perfectly good reasons, logical, well-adjusted reasons.” Was not Merton talking of Pilate and Ribbentrop, and to many of us, when he added: “They will be obeying sane orders that have come sanely down the chain of command. And because of their sanity, they will have no qualms at all.” On this Good Friday, as we ponder the suffering Christ endured, we should not forget the pivotal role of that good and decent bureaucrat Pilate in facilitating that crime. Nor forget the bureaucratic crimes committed daily on the sacrificial altars of obedience and expedience.