Weinstein Verdict and #MeToo Distract Us From the Real Problem 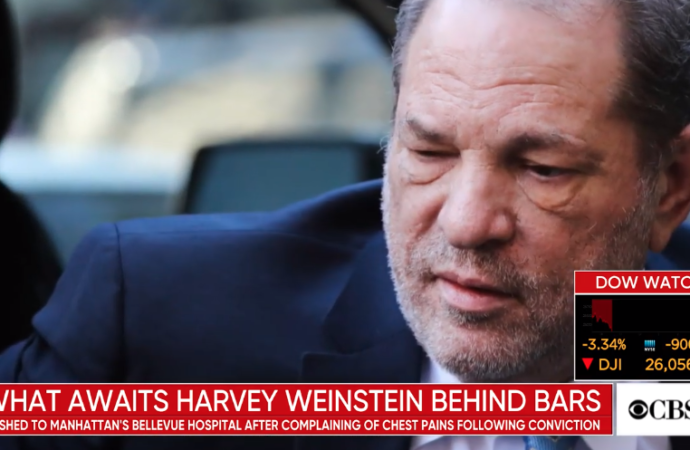 Harvey Weinstein was convicted of sexual assault and rape in New York on February 24, 2020. The verdict was immediately hailed as a victory for all American women and for the #MeToo movement.

“This is the new landscape for survivors of sexual assault in America, I believe, and it is a new day. It is a new day because Harvey Weinstein has finally been held accountable for crimes he committed,” New York District Attorney Cyrus Vance told the media after the verdict.

Is Vance right? Have we entered a new era for victims of sexual assault? That’s far from certain.

Arguably even more disturbing, however, is Farrow’s description of the coverup that protected Weinstein for at least two decades.

Farrow paints a picture of an incestuous, deeply corrupt political, financial, and media elite. Everyone who mattered in America had ties to Weinstein. He donated huge sums to politicians on both sides of the aisle. He was a close friend of the Clintons. He threw a book party for the daughter of former New York Governor George Pataki.

Farrow experienced how far-reaching Weinstein’s network was when he sought advice from celebrity lawyer Lisa Bloom, who represents victims of sexual assault. She lied to Farrow about the fact that she was also working for

Weinstein and even tried to milk Farrow for information about his reporting. Today, Bloom is busy representing victims of the late pedophile Jeffrey Epstein.

Farrow initially produced a report for NBC featuring interviews with women who accused Weinstein of harassment or assault. NBC not only killed the story but subsequently declined to renew Farrow’s contract. (He eventually published his report in The New Yorker magazine.) During this time, NBC was also protecting another sexual predator: their star anchor Matt Lauer. The NBC executives who Farrow explicitly accuses of participating in the Weinstein cover-up all still have their jobs.

Other journalists before Farrow tried to publish the allegations against Weinstein, but the latter successfully leveraged his network to kill their stories. Weinstein was nearly exposed in 2015 when an actress filed a police report accusing him of sexual assault. However, New York District Attorney Cyrus Vance made the charges disappear. Farrow describes Vance and Weinstein’s many close professional and financial ties. Yes, that’s the same Cyrus Vance who crowed about a “new day” for survivors of sexual assault.

It is scary to consider that there are men like Harvey Weinstein out there. But what’s even scarier is that the institutions that are supposed to protect women from sexual predators like him are not working. They’ve been captured by a vice-ridden elite that closes ranks to protect itself.

Why aren’t women in the streets with pitchforks? Why aren’t they breaking down the doors of NBC and the New York DA’s office? I believe it is because we all got distracted by the #MeToo movement.

In October 2017, a few days after the Weinstein story broke, actress Alyssa Milano tweeted asking women who had been sexually harassed or assaulted to post #MeToo. The response was overwhelming. Women from all walks of life began sharing their stories. Men across America were accused and canceled in short order.

In the two years that have passed, #MeToo has occasionally been targeted for criticism – by both the right and the left. A lot of these criticisms are valid, but they tend to miss the bigger problem. #MeToo encourages women to look around at men they know. That may be the right place to start. But women should also be looking up – at our elites, people we don’t know. That’s where the bigger danger lies.

The #MeToo movement has claimed a few high-profile scalps such as Matt Lauer, Kevin Spacey, and Charlie Rose. The elites understood that America’s outrage over Weinstein was bad enough that they had to sacrifice a few of their own as scapegoats. That was the price of maintaining the system for a while.

It’s hard to think of a sphere of life where women don’t hold important posts. Ironically, #MeToo may have strengthened their grip on power. Professional feminists are fully embedded members of the elite. Of course, professional feminists can’t admit their success or they’d put themselves out of business.

The #MeToo movement unites women from all walks of life as victims of predatory men. However, it does nothing to help the average American woman who is struggling to make ends meet. Ultimately, #MeToo is just another weapon in the hands of elite women.

Sexual harassment in the workplace is a problem. I’m not trying to gloss over it. However, #MeToo has caused women to focus on that exclusively, while ignoring the problem of a system of elites dedicated to protecting and enriching themselves. Women’s bodies are collateral to them. It’s time to set some priorities.