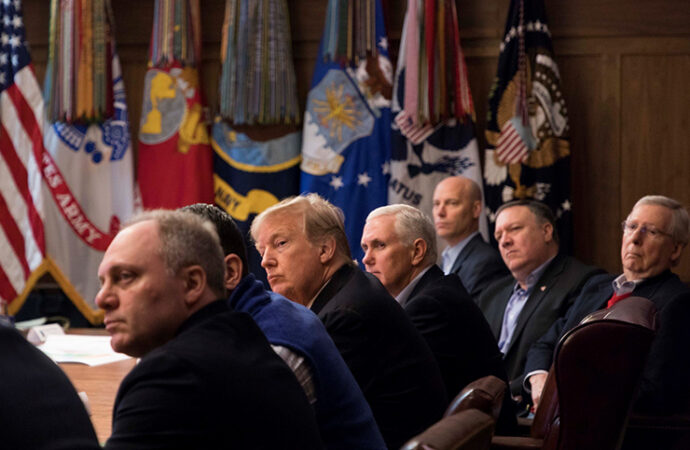 So much of the news cycle and the telegraphed concerns of our commentariat are completely fake. Fake crises like “climate change,” a phone call with the leader of Ukraine, or whether someone used the wrong pronouns tend to dominate the news cycle.

The recent Democratic presidential primary is a good example. At one point, the various candidates were tripping over themselves to be more “woke,” affirming reproductive “justice” for transgendered individuals and giving away our limited and expensive healthcare to anyone who sneaks past the Border Patrol. Similarly, during the summer before 9/11, one of the big media ginned up hysterias was over “shark attacks.” These manufactured crises immediately leave the stage when a real one emerges.

Recent events show us the difference between real politics and fake politics.

The coronavirus pandemic, as well as the economic impact of the various measures employed to arrest it, are a serious and multidimensional crisis that combines the basic feel of the 9/11 attack, the 2008 economic crisis, and the Cold War. Like 9/11, it is a sudden and terrifying paradigm shift. As in 2008, years of prosperity are revealed as vulnerable to shocks and paper wealth has disappeared in the blink of an eye. And, as during the Cold War, the threat of annihilation and a potentially years-long commitment to defense may be required.

At the moment, most of the worries about Trump’s legitimacy, court-meddling in executive power, and attempts to second guess his executive powers are giving way to a more primitive and instinctual collective submission. Trump is in charge, and even his longtime critics, such as New York Governor Andrew Cuomo and U.S. Representative Ilhan Omar (D-Minn.), have grown up a bit in the face of the real crisis and given him credit where it is due.

Some of the old mentality has not been fully tamed, however. Examples include the obsession with political correctness, including objecting to Trump’s completely accurate description of this ailment as the “Chinese Virus,” and the various celebrities engaging in self-pity about being confined to their multimillion-dollar mansions. These just serve to show that learning comes slowly to some. As the Greeks taught, we suffer into wisdom.

Trump has been faulted for his alleged slow response. We obviously do not know exactly what he heard from his advisors in the preceding months. We do know he had good reasons to be skeptical of the intelligence community, which has been either wrong or hostile to him since his 2016 campaign. But it seems entirely impossible and fantastic that he could have had the necessary political support to order the extreme lockdown measures that have since transpired any earlier than he did, just as George W. Bush could not in a million years have ordered a military incursion into Afghanistan in the months preceding the 9/11 attacks based on the intelligence reports he received.

He may have been slow to learn, but he has learned, and has approached the problem aggressively for at least two weeks. Now he must make extremely consequential and costly decisions under conditions of uncertainty. To his credit, President Trump in January largely halted travel from China, based not on an expert recommendation but common sense.

While Trump may have been somewhat slow to accept the reality of the crisis, what have the hedonistic young people crowding nightclubs and spring break destinations learned? Or for that matter, the sclerotic CDC and NIOSH agencies, which have proceeded with “business as usual” on approving medical gear and drug therapies?

One reason Trump has adapted quickly is that he is not very ideological.

For many years, a de rigeur list of “conservative positions” have inhibited serious appraisal of a changing world. Free-trade orthodoxy, for example, forbade reconsideration of massive amounts of manufacturing capacity being lost and sourced exclusively from a hostile Communist China.

Similarly, libertarian economics and concerns for moral hazard – concerns that did little to stop bank bailouts in 2008 – have led many to question the absolutely necessary emergency payments to suddenly unemployed waiters, bartenders, flight attendants, desk clerks, and other hospitality industry workers.

The Left is bound up in a similar ideological straightjacket. In a world where the virus originated in a particular place, they tell us viruses “do not know borders.” Actually, they do. Coronavirus can only be spread through “person to person” transmission. Stop the people from the source nations, and you stop the spread.

Rigid ideology is an obstacle to thinking creatively. When circumstances are normal, stable, and repetitive, some kind of ideological shorthand is useful. As Edmund Burke said, “Prejudice is of ready application in the emergency; it previously engages the mind in a steady course of wisdom and virtue, and does not leave the man hesitating in the moment of decision, skeptical, puzzled and unresolved.”

On the other hand, sometimes things change radically.

In the age of modern medicine, true pandemics have largely disappeared. Life expectancy has increased. Just a month or two ago the economy was booming, and smooth waters appeared to be ahead. Then the change was radical and sudden. Dizzying. Politics and policy had to change too. As the saying goes, “a young man knows the rules, but an old man knows the exceptions.”

One reason the partisan sniping has either died down or been ineffective is that almost no one really appreciated the scale and danger of this virus until only a few weeks ago. No one was sounding the alarm. And no one in either party had a ready-made series of recommendations or calls for actions in the preceding weeks. Most importantly, no one wants to take responsibility for the consequences of these difficult decisions.

Instead, in December and January, impeachment was afoot. Its basis – a phone call about military aid to Ukraine – appears picayune compared to the coronavirus and the related damage to our economy. It was like the “shark attacks” of August 2001.

Trump’s key themes should provide useful policy prescriptions longer term. Outsourcing is dangerous. Globalism and weak borders have costs. And a nation that has as much unity as an international airport lounge is unlikely to engage in the acts of self-sacrifice needed to weather a storm.

Certainly, a lot of improvisation is needed in the short-term. There are high costs to action and inaction, and we simply lack sufficient data to know what is the right call. Getting money into the hands of people is probably necessary; there is no way people without even $500 in emergency funds – 63 percent of Americans – can realistically do without work or money for very long.

No one envies President Trump’s enormous burden right now. And that’s why most of his critics have either been muted or ineffectual. This is a time of real politics. Even Trump’s critics know they have very little to say about that.