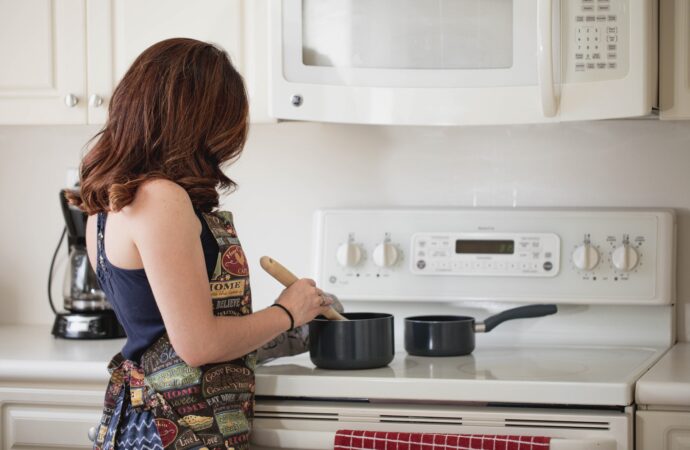 In a culture that has championed feminism, the Women’s March, #MeToo, and national campaigns to close the gender pay gap, life as a full-time homemaker seems anything but progressive. And yet, the growing #TradWife social media movement celebrates the classic domestic female as its role model.

The movement, often illustrated with 1950s posters of apple-cheeked housewives brandishing vacuums or serving their husbands dinner, consists of a growing multitude of women who proclaim their choice to be “traditional” wives by staying at home and fulfilling household duties rather than pursuing a career outside the home.

Not surprisingly, the trend has met fierce backlash. Critics have called it backwards, dangerous, and even racist. The reactions generally claim either that misogynistic males are hypnotizing their wives into submission, or that women who somehow prefer domestic life are spreading an insidious message that hinders the female crusade for equality.

Alena Pettitt, one of the most prominent public faces of the Tradwife movement, makes this abundantly clear. In a BBC interview with Victoria Derbyshire last month, the British marketing-manager-turned-housewife explained why she embraced the Tradwife life: “My talents lie in domesticity and cooking, and I love it,” she said. Soon after, she added, “It’s also an act of service for my husband, and it’s a way I demonstrate and show love.”

Derbyshire’s immediate follow-up: “Is it servitude?”

Even though Pettitt continued to speak about her free decision to work in the home, the question had already proven that Derbyshire, along with most modern feminists, missed the point.

By and large, full-time female homemaking is interpreted as servitude, even when it is freely chosen. In part, that is because it is associated with a time in which women were restricted legally, professionally, financially, and socially. While many of those restrictions have been lifted, the interpretation remains. Why? One big factor is that our culture’s emphasis on individual career success, particularly for women, has fueled and intensified it.

Within a worldview that urges women to be just as successful (if not more so) than men, domestic life is an entirely backwards choice, because 1) it limits a woman’s chances to achieve that success, and 2) it hands over the glorious career path to the man in the house, thereby placing her below him.

While there is certainly a place for voicing women’s needs when they are overlooked and fighting for their rights when they are violated, hyper-individualism and careerism do neither. They overshadow the reality that any kind of work is more fulfilling when it is done not for me but for you. And not you in a collective, abstract sense of community, but you as a real person within a relationship. In marriage, that means that whatever work is being done (inside or outside the home) has meaning when it is placed at the service of one’s spouse and the family that grows from that bond.

My husband, for instance, has always referred to his work not as “my career” but as “our career.” To him, the sole purpose of his profession is to give me and our children a happy life, and he works hard to excel at his job for that purpose.

The same logic of loving service applies to the work of the home. All of us have experienced its impact: When we walk into a dining room with the table set, napkins folded, and delicious food beautifully presented, we can’t help but feel loved. Someone not only took the time to prepare that meal but also invested effort to do it well, with attention to detail. Like any profession, doing something with precision and finesse leaves an impression. And when it is done for someone, it becomes more than an accomplishment. It becomes a gift.

This is what makes Pettitt and so many women (myself included) find deep fulfillment in homemaking. Some of us may have a better knack for housework than others, but for all of us, our work in the home is essentially about creating a bright and cheerful space for our families.

That total, loving dedication is not oppressing but empowering. It brings joy. It spreads love. That’s how humans are wired: when we give of ourselves in a full-hearted effort of love, we receive love abundantly in return. In Pettitt’s interview, one comment from a viewer captured this virtuous cycle of giving: “The more my wife puts me first, the more I put her first.”

With that outlook, life is no longer about “your career” versus “my career,” or about housework placed at the service of one spouse’s career advancement. Instead, it’s about “our home,” with each spouse’s work devoted to making that home flourish.

Such an outlook need not be confined to the #TradWife setup. A thriving marriage and family is possible whether or not both spouses work full time, and whether or not spouses share the work of the home. But regardless, the dedication to each other and the primacy of the family must remain constant.

Alena Pettitt’s approach has simply shone new light on the beauty of service within marriage, and for that, it is anything but a regression. It is a breath of fresh air in our individualistic culture, one that could rescue the happiness in homes of all shapes and sizes.