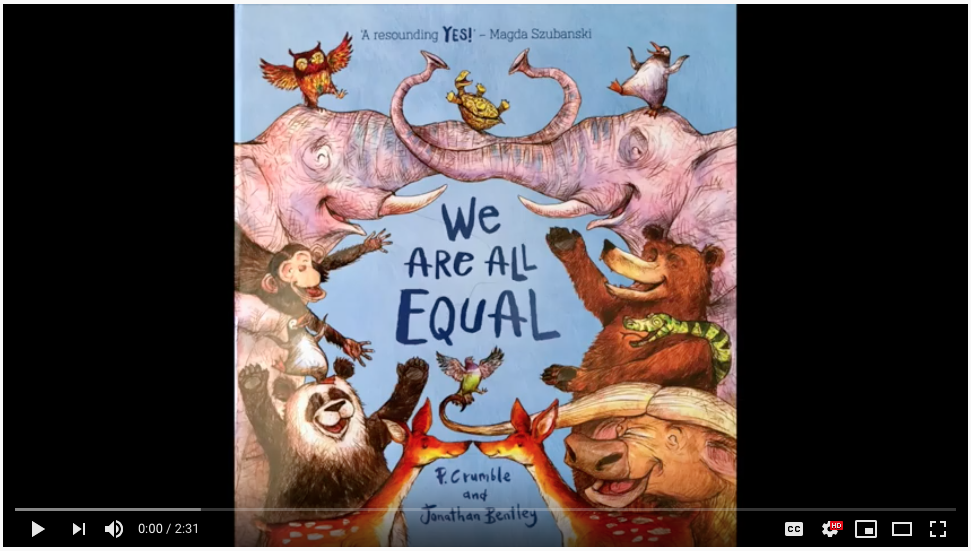 Whether something is education or indoctrination seems to be a matter of where you stand on its content. I have heard C.S. Lewis’ beloved classic The Chronicles of Narnia accused of indoctrinating children with Christianity.

My understanding is that indoctrination teaches a person or group to accept a set of beliefs uncritically.

Now, I believe my preschool children, aged 3 and 5, are being indoctrinated at their childcare center by a text espousing a set of values vastly different from those Lewis held. It’s title is, We Are All Equal.

I was mildly disconcerted when I noticed it in the reading corner. I sniffed a political message. So when I saw another copy on the borrowing shelf I decided to take it home.

Every new page begins the same: ‘We are all equal…’ The first couple of pages were innocuous enough, but it wasn’t long before the first political overture emerged:

We are all equal/ You’ve crossed land and sea/

Now this is your home/ We share this country

Whatever your opinion on immigration policy, the fact your child is being fed a specific political position on the subject is, for me as a parent, not on. But it didn’t stop there.

Soon, a barrage of messages infused with LGBQIP connotations emerged:

We are all equal/ Our love we decide/

We can get married/ No love is denied

As female actor and lesbian Magda Szubanski put it, this book is “a resounding YES” – a reference to the “YES” vote campaign in Australia’s plebiscite on same-sex marriage held in 2017. Driving this message home further, the book concludes:

We are all equal/ Let’s shout it out loud/

We share hopes and dreams/ We’re equal and proud

As a parent who holds values compromised by such messages, an additional concern is the element of grooming involved in the book. The messages are not overt, but they are incessant, and to the politically conscious parent, they are clear as day.

We Are All Equal would appear to raise another author’s legacy to the stature of prophecy. In his small, but powerfully prescient allegorical novel Animal Farm, George Orwell has the pig leader Napoleon declare:

That we are seeing this type of equality manifested now is clear in the claim of one reviewer that We Are All Equal “will put aside any prejudices children may have from learnt behavior.” Again, “prejudices” and “learnt behavior” are value-laden concepts that others might as easily call “beliefs” and “parental guidance”.

Yet, like the creatures in Animal Farm, we are in a predicament where “several of them would have protested if they could have found the right arguments.” We Are All Equal is shrouded in enough ambiguity as to be virtually safe from criticism.

Apart from the question of whether you believe in an open-borders policy or same-sex marriage, two other serious concerns emerge from this situation.

First, that preschool literature is being politicized at all.

Second, that parents are not being informed that a literary text which compromises the values of at least two of the major religions – Christianity and Islam – is being fed to their children without their being informed.

Anyone with misgivings about where the zeitgeist is heading at high speed should feel at liberty to consider feeding young children political messages to be a rather shabby business. And, coupled with adorably cuddly animal characters, this book is social engineering at its finest.

So, what will my family do?

Perhaps being woke is in vogue. But being in vogue now requires that we ditch our principles, not “stand like a rock.” As supporters of traditional marriage, my husband and I are socially regressive rabble-rousers by this book’s standards.

Better to be rabble-rousers, though, than political wowsers. This week, we’ll be letting our childcare center know we should have been informed of our children’s exposure to politically sensitive material. And politely make it clear that we’d prefer our children not to be involved when this book is read in class.

I understand this is a case of “horses for courses”. Some may be unwilling or decide it unwise to defy the status quo for one reason or another, even if they agree that political messages and preschoolers shouldn’t mix.

Theoretically, our stance will cause no long-term disadvantages. But in reality, it pushes us to the margins of society because it exposes our unwillingness to toe the politically correct line. We hope we are equal to the task.

This article was republished under a Creative Commons license from Mercator.net.