Fewer Teenagers Have A Job, and That’s a Problem

In the summer of 1995, I took my first full-time job. It was seasonal work at Lake Arrowhead, a golf course about 20 minutes from my parents’ house. I couldn’t legally drive yet—I was only 15—but a friend who had also applied offered to drive us both if we got hired, and we did.

That summer I worked 40 hours a week mowing lawns, repairing cart paths, and changing hole locations before sunrise. I was paid $5 an hour, 75 cents more than the federal minimum wage at the time, and I was allowed to golf for free.

I’m tempted to write how lucky I felt to have that job, but to be honest, I don’t think I felt lucky at the time. Waking up at 5 a.m. is not a blast, especially for a growing 15-year-old, and nine-hour days begin to feel pretty long after a few weeks. To make matters worse, in my second week on the job I crashed a $40,000 riding mower into a tree and bent the deck. I was sure I was going to be fired, but I must have appeared sufficiently contrite because they didn’t sack me. As for free golfing, I could barely enjoy it, partly because I was often too pooped to walk nine holes after work and partly because I was a pretty lousy golfer at the time.

Looking back on things today, however, I can see everything I took from that job. I learned how to wake up early, punch a time clock (on time), and drive a stick-shift. I operated light machinery, received a crash course in landscaping and horticulture, and learned how to take orders and execute directions. At the same time, I took home a couple thousand dollars (after taxes), improved my slice, and scavenged a few hundred golf balls from errant tee shots. (Confession: sometimes we’d hunt for golf balls in the woods in between weed-whipping.)

I bring my first job up for a reason. Government data show that fewer and fewer young Americans are getting something important: job experience.

The Trend of Fewer Young People in the Labor Force

The Bureau of Labor Statistics (BLS) released data last week projecting the labor participation rate of younger people (ages 16-24) to drop from 55.2 percent to 51.7 percent over the next decade. A decade ago, the labor participation rate—basically the sum of employed workers divided by the working-age population—of this demographic was 58.8 percent; a decade before that, it was 66 percent. 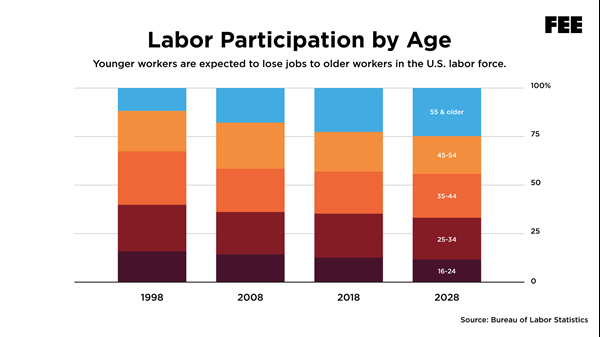 To put that projection into perspective, a decade from now, the labor participation rate of young people will barely be higher than the period following the Great Recession, when the employment rate for younger people briefly fell below 50 percent (48.8 percent), a historic low.

There are various factors behind this labor trend, and not all of them are necessarily bad. A recent report published by the Brookings Institute states the trend is primarily “driven by an increase in school enrollment and time spent on education-related activities.”

This would suggest, in contrast to stereotypes of lazy young people who just want to play video games, that many young people are simply choosing to invest more in their own human capital. This is not the only factor driving down youth employment, however.

The BLS report cites “displaced opportunities” as another, “as older workers fill jobs historically held by younger workers.” Indeed, BLS data show the labor participation rate of each of America’s three oldest demographics—55 to 64, 65 to 74, and 75 and older—increasing over the next decade.

I spoke to economist Antony Davies, and he said two policies, in particular, contribute to this generational employment shift. First, the Federal Reserve’s low-interest rates, while good news for borrowers, have reduced retirees’ interest income to the point that many have been forced to re-enter the workforce. Second, rising minimum wages make it more expensive for employers to take risks on young, untried employees.

“If one wanted deliberately to enact policies aimed at shutting young workers out of entry-level jobs and replacing them with former retirees, these two policies would be at the top of the list,” says Davies, a professor of economics at Duquesne University (and co-host of FEE’s Words & Numbers podcast.)

More Than a Paycheck

In an era that places education on a pedestal, it’s easy to forget the value of work. But it’s important to remember that jobs—especially a first job—are much more than a paycheck.

“[A first job] can mean a connection to a lifelong mentor, the ability to envision a career path, a boost in self-confidence, an appreciation for the value of education, an off-ramp from a life on the streets, a belief that you can be something,” wrote Danielle Gray and Bethany Henderson, two Obama administration officials who worked on youth job initiatives.

This is one more reason that policies that make it more difficult to land that first job should be avoided.

I’m fairly certain Lake Arrowhead would not have hired me 25 years ago if they had had to pay me $15 an hour to cut grass, change hole locations, and drive around on Cushmans all day getting a suntan. And who could blame them?

The irony here is that I would have been the one losing out. Lake Arrowhead Golf Course would have managed just fine.