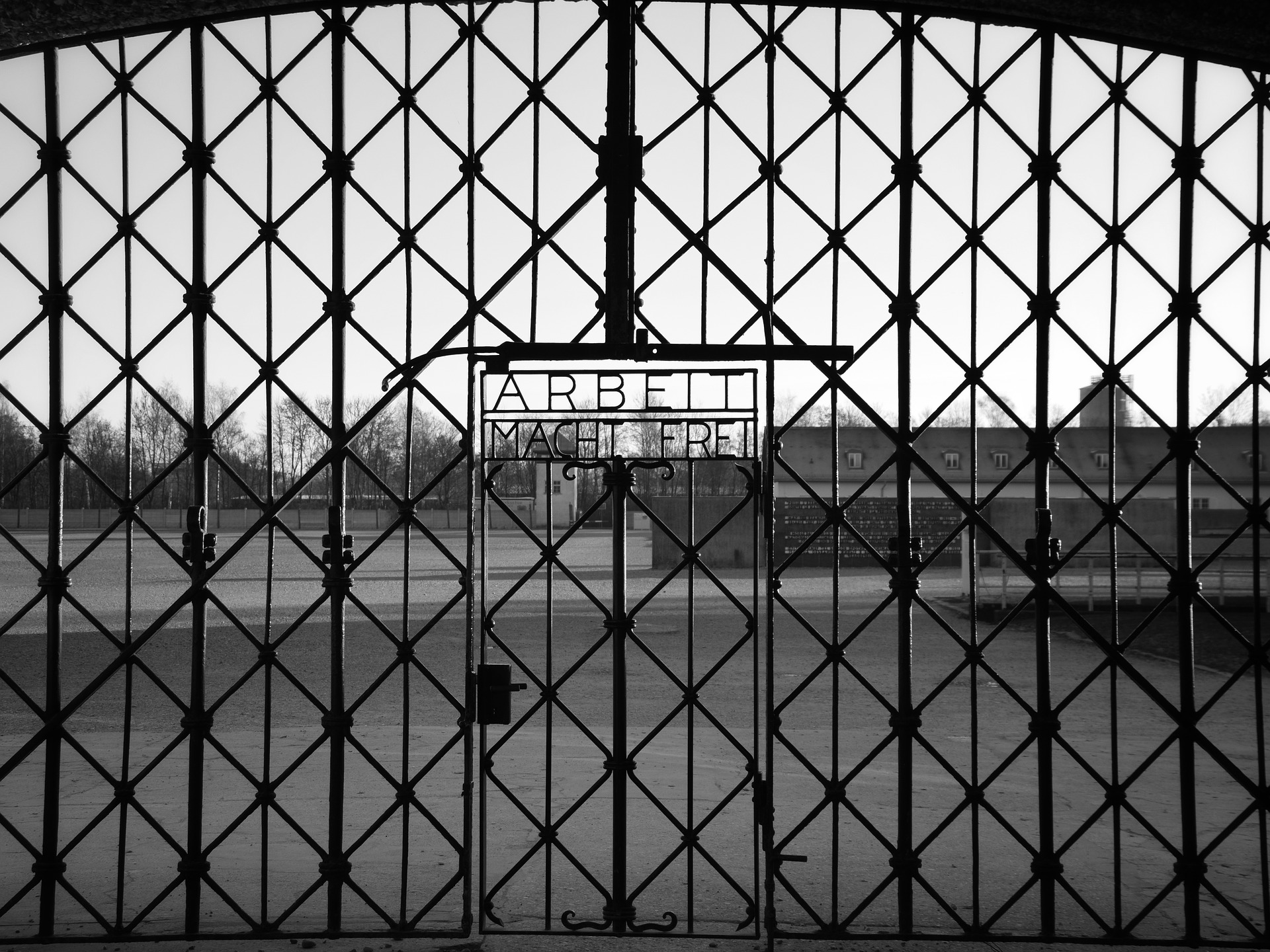 Right now, someone in the media is finding another excuse to proclaim that Trump is Hitler, America is Germany 1933, and detention centers on the southern border are concentration camps. Recently I went to Dachau, just outside of Munich, to see a real concentration camp.

The first thing you notice is the irony. The people who, in too loud voices, mill around the station entrance asking “Is this the train to Dachau?” and then the conductor’s announcement calling out the name as if it were just another stop. The mediocre station has a McDonald’s. The bus stop sign for the shuttle you need to take has “Concentration Camp” written in English. Everyone around you is on vacation, dressed for it and chattering like it. You arrive at a visitor’s center, and there’s a rush for the toilets and the snack bar. Which way to the camp, Dad? Can we see the crematorium? Can we?

A hundred steps outside the snack bar, the world changes. The road turns gray even though the light playing through the poplars is out of a postcard. They’ve changed the entrance location from a few years ago so that you now enter through the former SS barracks and come to the gate. It really says Arbeit Macht Frei (“Work Will Set You Free”) on the iron bars and you walk through just like they did. The gate only swings one way; you will leave today, but it wasn’t originally designed that way and you can tell. There may be a hundred people with you but it is completely silent as you enter.

It is too small. You see the administrative buildings to the right, the reconstructed prisoner barracks to the left, the assembly ground in front of you. You see the fences and walls on all four sides, walkable in a few minutes at an easy pace on a gorgeous day. It is too small to have held all those people, too small for all that happened, too small to be the symbol of Nazi power it was then. You expect something more substantial, with the distant site lines obscured, like at Disney World, where tricks of the eye make things seem grander.

It is too familiar. It takes only a few minutes to get your bearings. You’ve seen photos before, and there are many posted, populating the place with buildings and people once here and forever gone. It is unlike, say, an art museum on the scale of the Met or the Uffizi, where, after hours of circling corridors, you have no idea where you’ve been. You know Dachau.

The museum unfolds in the order that new prisoners were processed. The early days of National Socialism are explained where the inmates were once assigned numbers. The seizure of power by Hitler is documented in the room where people were stripped and deloused (subtlety is missing when the backdrop is Nazism). And you exit into the campgrounds awkwardly after reading about their liberation by the 45th Infantry Division.

You think, after all that reading and those museum exhibits (and it is a thorough education, much more than an Instagram collection of artifacts and, oh look, a real prisoner’s uniform, honey!), you understand something. But not yet. You have really just arrived, and in front of you is Dachau itself, the ground, the air—the same ground they saw and air they breathed—and you have a choice. Many visitors turn back towards the snack bar, falsely satiated after an hour, thinking they’ve seen Dachau and anxiously trying to remember when the shuttle bus runs back to the station.

If you wait for them to leave, you can see Dachau.

Most of the place is empty, acres of crushed stone with flat markers showing where the now-missing barracks were. The trees lining the central road bisecting the camp are old. They were here when Dachau was working. You can match up an individual tree from a 1942 photo with the one in front of you and touch it. The sun is warm; it’s a beautiful late summer afternoon with those wonderful tickles of early fall all around. A day to be alive, grandpa would have called it. There must have been days just like this one in 1942.

There is some minor archaeological excavation work going on. An archaeologist stands over a hole about three feet deep and explains that he’s looking for evidence of the original fence line, the border of the camp before it was expanded in 1937. He’s found some wooden post fragments and some barbed wire. So the bottom of that hole is 1937, I ask? Yes, he says, the dirt and stones piled here haven’t seen sunlight since then. I ask if I can take one of the stones with me as a keepsake, and he explains that is not allowed, even as he looks away just long enough. Doing the right thing is hard enough elsewhere, never mind in Dachau.

A sign states simply that the area in front of you is where the barracks used for medical experiments on live humans once stood. Another denotes the punishment barracks, where the SS concocted even darker methods of retribution. You see where the bodies were stacked like cordwood but you know that wood is strong and straight and the images you are recreating show corpses floppy and tangled in their piles. Now you are seeing Dachau, here in the deeper waters.

Dachau does not believe in your tears. This is not a sentimental place. It is not clean. A universe of victims died here but there is no acknowledgement of victimhood, or raising of awareness, or giving of voice, or trafficking in shallow hashtags. Dachau is here to declare what happened and charge you with doing something on the scale and with the accuracy that are required.

See, by coming here, it is now handed to you, that obligation. Hitler and his Dachau did not emerge from an election that frowned on a favored candidate. Following World War I, Germany was purposefully humiliated and saddled with war reparations that were not payable. An economic crisis unrolled. Inflation drove the nation to starvation. With no history of democracy, Germany was willed into a republic as unprepared as two virgins in an arranged marriage. Both across the border and at home, powerful communist forces threatened. Hungry people weren’t tricked into a strongman because of Facebook or some Electoral College fluke; they demanded one.

Within three months of taking office, Hitler gave himself the right to amend the constitution, ended representative government, created special political courts, made criticism of the government a capital crime, and established Dachau. Two months after that, Jews were fired from government positions, political parties and unions were prohibited, opponents were murdered, and books were burned. There was no slippery slope. It was not incremental; it was inevitable.

There is obviously more to this story than a travelogue about an interesting day trip out to Dachau by train from nearby Munich. To say that Trump is Hitler, America is Germany in 1933, and a grimy detention facility is a concentration camp means you have never been to Dachau.

The presentation at Dachau is very un-2019, where everyone vies for adopted victimhood and chosen trauma. Dachau is cold because only its facts matter. Tweets childishly mocking political opponents and regulations preventing a small number of self-declared trans people from joining the Army have nothing to do with Dachau. To cite 2019 border facilities or exaggerate the historical impact of a march in Charlottesville is to turn Dachau relative, the dial jiggered to magnify some other event. It makes people numb; it dumbs down discussion; it is cheap, inaccurate, and exploitative. It demands mighty outrage from a partial set of facts. Both butterflies and elephants have legs, but no one should claim a butterfly is an elephant.

Propagandists have always used ignorance to manipulate. Yet while CNN works to convince viewers that silver mylar blankets instead of comfy quilts for migrants means there are concentration camps in America, Dachau reminds us that physicians here dissected human beings alive as part of medical experiments. Just as is taught in beginning writing courses, truth comes from showing, not just telling. For those who call Trump a Nazi, there is Dachau to visit. For the record.