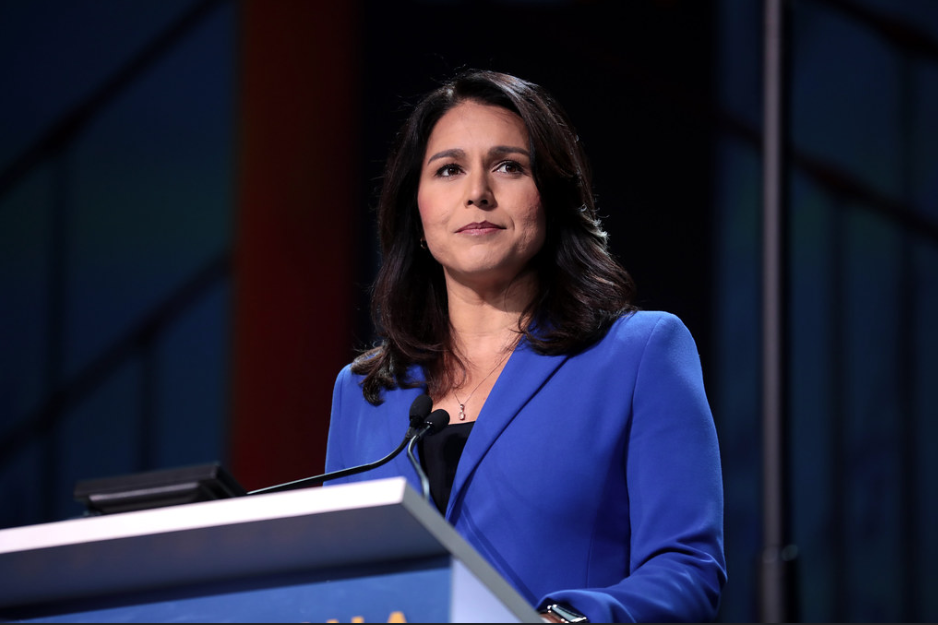 It was already one of the most memorable moments of the Democratic presidential debates in this young election cycle. “Leaders as disparate as President Obama and President Trump have both said they want to end U.S. involvement in Afghanistan but it isn’t over for America,” observed moderator Rachel Maddow. “Why isn’t it over? Why can’t presidents of very different parties and very different temperaments get us out of there? And how could you?”

Representative Tulsi Gabbard of Hawaii was having none of it. “Is that what you will tell the parents of those two soldiers who were just killed in Afghanistan? Well, we just have to be engaged?” she asked a sputtering Ryan. “As a soldier, I will tell you that answer is unacceptable. We have to bring our troops home from Afghanistan.” Gabbard noted that she had joined the military to fight those who attacked us on 9/11, not to nation-build indefinitely in Afghanistan, and pointed out the perfidy of Saudi Arabia.

Some likened Gabbard’s rebuke of Ryan to the famous 2007 exchange between Ron Paul and Rudy Giuliani. Except Paul, then a relatively unknown congressman from Texas, was speaking truth to power against “America’s Mayor” and the national GOP frontrunner. Gabbard is polling at 0.8 percent in the national RealClearPolitics average, and was challenging someone at 0.3 percent.

Ryan’s asterisk candidacy is unsurprising. But Gabbard has been perhaps the most interesting Democrat running for president and Wednesday night could be her last stand. She gets to share the stage with frontrunner Joe Biden, like Hillary Clinton a vote for the Iraq war. There is no guarantee she will get another opportunity: the eligibility criteria for subsequent debates is more stringent and she has yet to qualify.

The huge Democratic field has been a bust. Of the more than 20 declared presidential candidates, only seven are polling at 2 percent or more in the national averages. Two more – Senators Cory Booker and Amy Klobuchar – are polling at least that well in Iowa. Only four candidates are consistently polling in the double digits: Biden, who recovered from his early debate stumbles and remains comfortably in the lead; Senator Bernie Sanders of Vermont, who has nevertheless mostly failed to recapture his 2016 magic; Senator Elizabeth Warren of Massachusetts, who seems ascendant; and Senator Kamala Harris of California, potentially the main threat to Biden’s rock-solid black support.

Low-polling candidates have still managed to have an impact. Some, like former secretary of housing and urban development Julian Castro, have helped coax contenders likelier to win the nomination to the left on immigration. We’ve thus seen Democrats raise their hands in support of decriminalizing illegal border crossings in the midst of a migrant crisis not entirely of the Trump administration’s making, expanding Medicare to cover everyone even at the expense of private health insurance, and ensuring that “everyone” includes illegal immigrants. Transgender abortions, also at taxpayer expense, have come up too.

Gabbard has so far been unable to penetrate this madness despite being young (she’s 38), attractive, telegenic, a military veteran, a woman of color, and an articulate, passionate opponent of the regime change wars that have brought our country so much pain. While reliably progressive, she has occasionally reached across the political divide on issues like religious liberty and Big Tech censorship, a potent combination that could prove more responsive to Trump voters’ concerns than what we’ve heard from her neocon lite interlocutor from Youngstown.

“None of this seems to matter in a Democratic Party that cares more about wokeness than war. In fact, Gabbard’s conservative fans – The View brought up Ann Coulter – are often held against her, as is her failure to go all in on Trump-Russia. Ninety-five Democrats stand ready to impeach Trump over mean tweets with nary a peep over the near-bombing of Iran or the active thwarting of Congress’s will on Yemen.

That’s not to say that no one else running is sound on foreign policy – Bernie has realist advisers and it took real courage for Warren to back Trump’s abortive withdrawals from Afghanistan and Syria – and it required a Democratic House to advance the bipartisan Yemen resolution. But none of them are basing their campaigns on it in the same way Gabbard has. Nor do any of them better represent our military veterans’ sharp turn against forever war, arguably the most important public opinion trend of our time.

Liberals remain skeptical of Gabbard’s turn away from social conservatism (which admittedly went far beyond sincerely opposing gay marriage while Barack Obama was merely pretending to do so), which she attributes to “aloha.” In meeting with Bashar al-Assad, she hurt her credibility as a foe of the Syria intervention, failing to realize that doves are held to a higher standard on these matters than hawks.

A saner Democratic Party might realize the chances are far greater that their nominee will be a covert hawk rather than a secret right-winger. Only time will tell if vestiges of that party still exist.