‘Hold The Mayo’: Me and Mickey D’s 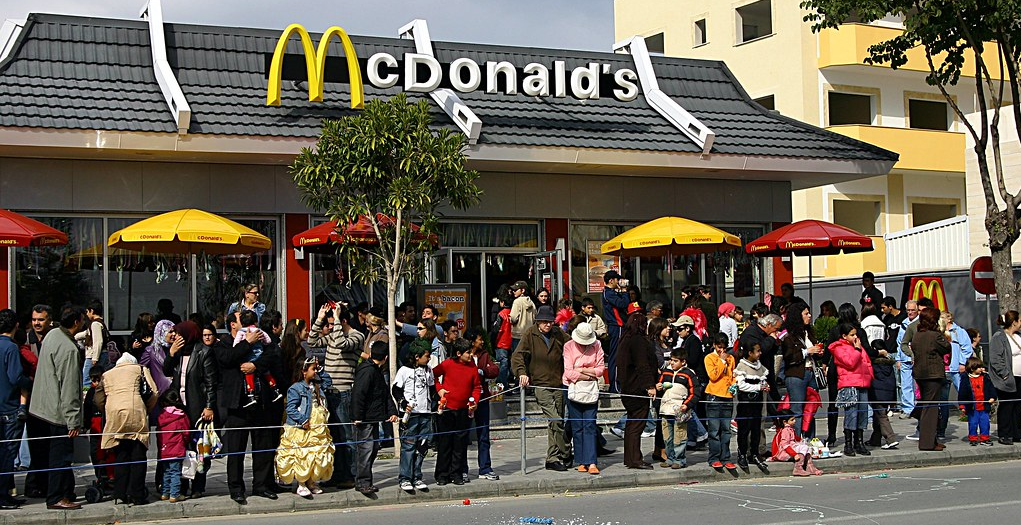 It’s nearly noon, and I need fuel – not for my car or home, but for me. And because of my budget, I need cheap fuel.

It’s time for the Golden Arches.

Where else can I pay less than five dollars for two chicken sandwiches ­– “Hold the mayo, please” – and a Diet Coke? Heck, the coffee shop I love and where I have spent most of my morning working charges four bucks for a 16-ounce Brazilian.

The drive-thru line is wrapped around the building, but I stroll inside the restaurant, place my order, and receive it in less than three minutes. The young man behind the register is polite, speaks with the accent of these Virginia hills, takes my order, gives me my change, and then hands me the small paper cup for my soda. Why order large, I always reason, if I can have as many refills as I want? The African-American woman who calls my number and hands me my tray of sandwiches calls me “Sugar.” I make my way to a table, unwrap the first sandwich, give thanks for the food, and take a bite while reading Intellectual Takeout.

Around me are the other diners: old guys, a woman tapping away on her phone, a family whose grandmother is wearing a sari, two guys in their mid-fifties discussing some points about real estate. Every once in a while I glance out the window at the line of traffic in the drive-thru, cars and pickups easing forward as this hot day approaches noon.

Yep, I’m eating at McDonald’s. And so are a lot of other people. Let’s see why.

But first let’s consider the attacks on McDonald’s. Some years ago, film maker Morgan Spurlock made Super Size Me, a documentary in which he ate three meals a day for 30 days at McDonald’s, gained 25 pounds, and claimed to have suffered irreversible heart damage. Sounds awful, doesn’t it? Less well known is Josh Cisna, a science teacher who was overweight at 280 pounds. He ate at McDonald’s for six months and lost 56 pounds because he limited his intake to 2000 calories a day and worked out four or five days a week. Regulate calories and take regular exercise, Cisna says, and you can eat almost anything you want.

Today McDonald’s is under fire for more than its burgers and fries. A few employees are suing the company for sexual harassment, some groups are upset with the paper straws the company uses, Change.org is outraged by the plastic toys in the kids meals, and various groups are demanding the company raise its minimum wage to $15 an hour, a move that is pushing McDonald’s and other fast food restaurants to replace workers with robots.

Finally, many people scorn McDonald’s because… well, because they’re snobs. In his YouTube video, comedian Jim Gaffigan begins his spiel about McDonald’s this way: I reference McDonald’s a lot because I go to McDonald’s. (Not a peep from the crowd, which until then was laughing and applauding). I love the silence that follows that statement, like I just admitted to supporting dog fighting or something. (The laughter returns. A look of mock horror appears on Gaffigan’s face). How could you? McDonald’s? (Gaffigan smiles.) It’s fun telling people you go to McDonald’s. They always give you that look, like “I didn’t know I was better than you.”

Now to some questions: If McDonald’s is so terrible, then why do customers continue to eat under the Golden Arches? Why are there 37,000 McDonald’s restaurants in 119 countries, outlets employing more than 1.9 million people? How does McDonald’s sell 75 hamburgers every second?

Daily, more than 68 million people visit McDonald’s, more than the population of Great Britain. Why?

First, when you are poor or on a limited budget, McDonald’s and other fast food joints allow you the restaurant experience without breaking your bank account. My daughter is no fan of McDonald’s, but if she were and if I so desired, I could feed her seven children for under $25 at Mickey D’s. That single mom who just picked the kids up from daycare, that guy and his friend who can hardly scrape the rent together every month: for these folks, McDonald’s is a night on the town.

McDonald’s is also a cheap gathering place for retirees. When you can get a cup of hot coffee for under a dollar, followed by one free refill, the place looks attractive to the social-security crew. They gather in the morning, drink their coffee, perhaps order a sausage biscuit, and chew the fat – figuratively, and sometimes, literally – with their friends for an hour or so, and say their goodbyes without having dropped a wad of money.

Finally, McDonald’s offers fast, convenient, and standardized service. The Big Mac, the McGriddles, the McMuffin, the McChicken Sandwiches – I think I need a McDictionary – taste the same whether you eat them in Augusta, Georgia, or Des Moines, Iowa.

With the exception of Bill Clinton and Donald Trump, few celebrities and politicians deign to enter a McDonald’s. Too bad. If one of the Democrats on the campaign trail made a habit of eating regularly at McDonald’s in cities across the land, saying hi to the good old boys and greeting that single mom with her two small children, he – or she – might soon be touted as the everyday politician the Democrats so sorely lack these days.

Anyway, there in black and white you have my confession: I sometimes eat at McDonald’s.