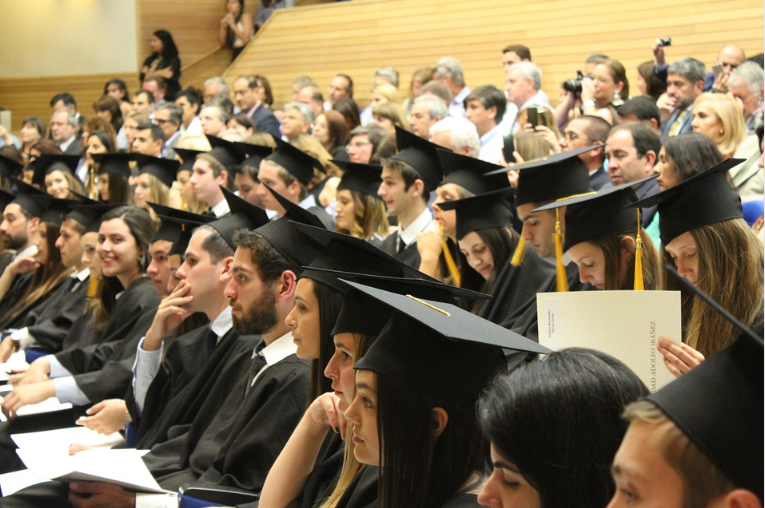 I can’t pretend to have any insights into the experiences of successful black people, seeing as I’m neither. But I was struck by the video of Robert Smith’s commencement address at Morehouse College, where he announces that he’ll personally pay off every single graduate’s student loans. Unless you’re the personal recipient of Mr. Smith’s benevolence, the best part of that video has to be the chap in the very bottom-left corner of the screen – the one in the Tudor bonnet and horn-rimmed glasses – whose face lights up like an owl that’s just been awarded a lifetime supply of chocolate-dipped barn mice.

Writing in The Atlantic, Ibram X. Kendi put the story into the context of American racial inequality:

“More than the money we make, the awards, or recognition, or titles we earn, each of us will be measured by how much we contribute to the success of the people around us,” Smith told the Morehouse graduates. “True wealth comes from contributing to the liberation of people.”

For accomplished African Americans, that means realizing that we took advantage of “a fleeting glimpse of opportunity and success just before the window is slammed shut,” to use Smith’s words. For anti-racists of all races, it means assuming power and changing policy and maximizing impact to reopen windows for all. Because we can’t be community-made if we are not making the community.

Again, I have nothing meaningful to say about the black experience in America. But we need stronger communities in this country across the board. “We can’t be community-made if we are not making the community” – that’s a profoundly conservative idea.

Morehouse, as you no doubt gathered, is what’s called an “historically black college,” or HBU. I’ve always found that to be an odd phrase, since it’s also currently black – 85 percent of it, to be exact. We don’t say that Harvard is “historically elite” or that Michigan State is “historically bad at football.” But I digress.

Morehouse is known for its distinguished roll of alumni, from Martin Luther King to Herman Cain. For those who believe in systemic racial discrimination – and again, I have no expertise on the subject – the HBUs provide opportunities for black students who, they argue, won’t get a fair shake from the Ivy League.

All of this presupposes that the relatively small number of black students in elite institutions is detrimental to blacks. After all, feminists demand equal treatment from corporate boardrooms, but not conscription boards. But I’m not so sure that’s the case.

Some of them get lucky and land internships at big-time marketing firms, and they’re set for life before they even graduate. But most of them don’t use their degrees, and couldn’t if they tried. I remember one of my professors asking our English honors seminar what we’d read over the summer. “I mostly, like, read articles on Facebook,” one girl explained. “Yeah,” said another, “I was just, like, keeping up with the news.” After cycling through 20 students, I was the only student in the class who had read a book. Even literature majors don’t care about literature. Why on earth are they there?

This was at the University of Sydney – which, as my fellow alumnus Clive James quipped, likes to think of itself as “Oxford or Cambridge laterally displaced approximately 12,000 miles.” I was baffled they got into the honors program at all. Then I realized that, if you’re good at doing school stuff, you can excel in any of the humanities. Memorize factoids for a test, write an essay telling the professor what he wants to hear, make a controversial and vaguely relevant comment in a tutorial, and boom! You’re a Bachelor of Arts.

But what do you have to show for it? Again, maybe you befriended a low-level executive who can give your fledgling career a boost. Maybe your college has a strong alumni network. But while companies all but require applicants to have a Bachelor’s in something, they all know it doesn’t imply that you’re competent in any way. Unless they need someone to write Freudo-Marxist analyses of Sense and Sensibility. In which case, you’re set.

So corporations need to stop mandating that applicants have useless degrees in subjects they don’t care about. That, I think, is only a matter of time.

But why work for a corporation at all? That’s another bubble we need to pop. Only about 10 percent of Americans are employed in manufacturing and agriculture – that is, they actually make stuff. About four out of five Americans just push money around. We’re reaching peak overcapitalization. Hopefully, President Trump’s protectionism and producerism will become mainstays of the American conservative agenda. And the HR guy at the local shoe factory isn’t going to grill you to see how well you know your Foucault.

In the meantime, learn a trade! A plumber can easily make $100,000 a year. And if you’re not keen on working with human waste, electricians make almost as much. You can train on the job, as opposed to dying of exhaustion for an unpaid internship. Best of all, you can get started immediately and stay in your hometown. There’s a huge labor deficit in the trades. I’ve heard so many old-timers say, “I’d gladly hire any young guy who can spell his own name and isn’t a drug addict.”

The problem is, our culture pooh-poohs manual labor. A white-collar job that pays $40,000 is automatically more prestigious than a blue-collar job that pays $75,000. Success is measured by how clean you keep your fingernails. Americans also see themselves, to quote Steinbeck, as “temporarily embarrassed millionaires.” Most of us will go for the billion-to-one odds of being the next Steve Jobs against the guarantee of an ordinary, comfortable, quiet life. Both are, at bottom, just pretentiousness.

So do you want to help young people? Here’s how.

If you’re a mother or father, don’t hype that piece of paper. Don’t stuff your kid’s heads with bourgeois fantasies about corner offices and BMWs. Let him experience the unique sense of achievement that comes from working with his hands. Help him to recognize the simple dignity of the worker, like St. Joseph. Raise him to be a provider, a husband, a father – not an entitled fop with an expensive watch.

If you’re in a position to hire and fire, don’t require a candidate to have a Bachelor’s degree unless it’s absolutely essential. Provide on-the-job training for a fair wage. There’s actually very little risk to you as the employer. Until fairly recently, a woman didn’t even need a nursing degree to be an R.N.! There was a time when universities were centers of learning and leisure for young aristocrats, and all jobs began as apprenticeships. Even the king was once a prince; even the priest got his start as an altar boy.

Just the opposite, in fact. It will be because well-meaning rich guys like Mr. Smith will continue pushing black teenagers into B.A. programs long after whites have realized they’re usually dead ends. Whites will be earning a living wage in their early teens while black students will be working at mall cafes to pay off their student loans.

Have you noticed that politicians don’t talk about the working class anymore? Everyone except the super-rich are lumped together in the “middle class.” That will change, too. The future of this country belongs to those who work.